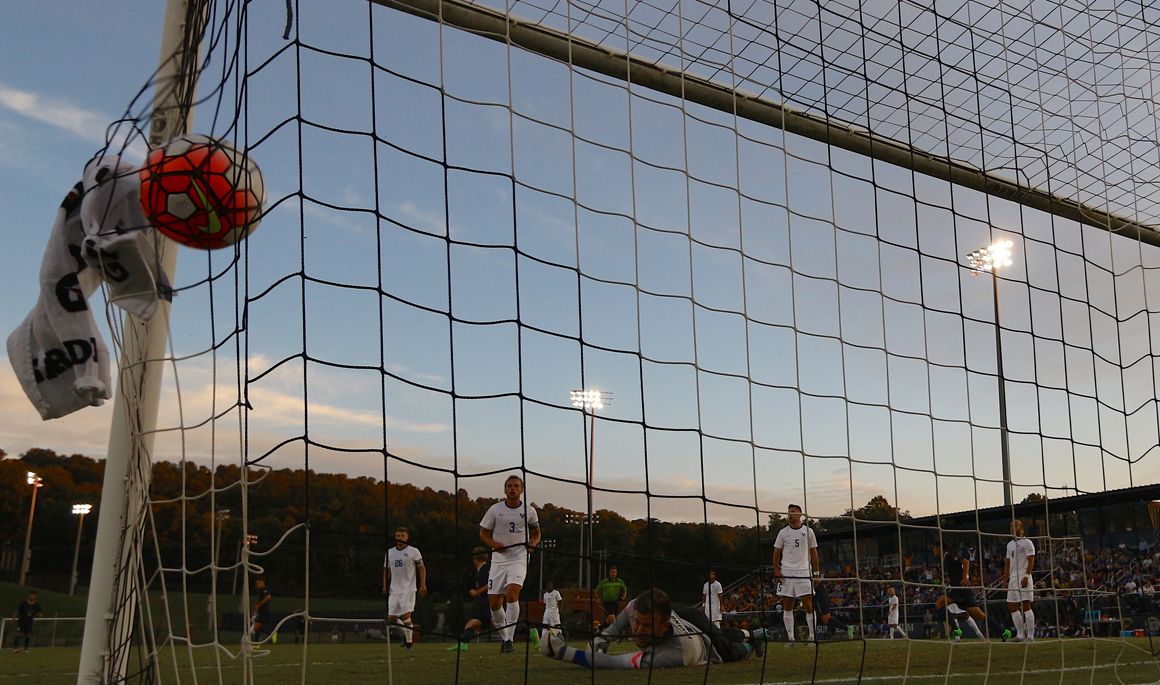 JOHNSON CITY, Tenn. (Aug. 20, 2016) – Five Buccaneers scored in their final exhibition match of the preseason en route to a 6-0 shutout of Milligan College at Summers-Taylor Stadium on Saturday night.

Milligan nearly scored within the first two minutes of the match after a misplaced ball by the Bucs. The Buffaloes forward struck the ball with goalie Daniel Adelman (Johnson City, Tenn.) rushing the shot, but the attempt hit the cross bar to end the threat.

After a long pass from Fletcher Ekern (Knoxville, Tenn.), Joao Ramalho (Monte Santo, Brazil) was pulled down by a Buff centreback within the box and was immediately awarded a penalty kick. Ramalho took the kick and found the bottom corner to take the early lead 1-0.

After a rain delay of over an hour, Ramalho took a shot from just outside of the 18-yard box and drilled the right post. The ricochet found a Milligan defender and was cleared out of danger.

Minutes later, Ekern took advantage of a misplayed ball by playing the ball wide and knocking a low cross to Mitchell Cecatiello (Pascagoula, Miss.) who tapped the ball into the open net to take the 2-0 lead.

Just three minutes out of halftime, Ekern scored his first goal of the preseason off a ricochet from the Milligan goalkeeper to extend the match to 3-0.

After nearly no offensive chances for either team, ETSU lost possession in their half of the field and gave the Buffs a breakaway chance with the ETSU goalie. Buccaneer defender, John Lucchesi (Johnson City, Tenn.), tried to break up the scoring chance but was tangled with the Milligan player in the box to give them a penalty kick. The Milligan penalty taker kicked the ball straight, but Adelman wasn’t fooled as he knocked the ball to the side to maintain the 3-0 lead.

After multiple subs halfway through the second half for ETSU, Cam Schneider (Knoxville, Tenn.) tacked on another goal for his first goal at ETSU. After receiving a pass from the left side, he drilled a shot into the bottom right to take the commanding 4-0 lead.

In a game of firsts, Cameron Woodfin (Old Hickory, Tenn.) drilled his first goal of the preseason which found the right side of the net to add to the lead, but Woodfin didn’t stop there as he was fouled in the Buffs’ box several minutes later and scored the final goal of the night to make the game 6-0.

The Blue and Gold will open their regular season on the road at High Point University on Aug. 26 with first touch at 7 p.m. ETSU will have their home opener on Aug. 31 versus George Mason.