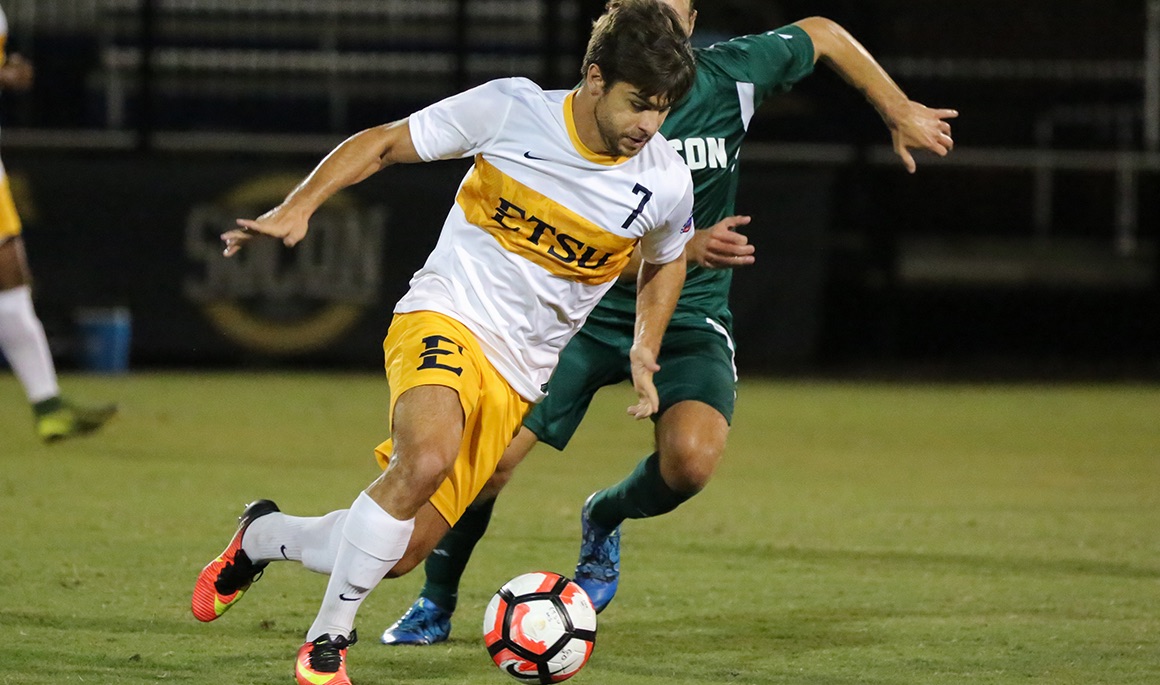 JOHNSON CITY, Tenn. (Aug. 31, 2016) – After a two hour and 45 minute lightning delay, the ETSU men’s soccer team scored two goals in each half en route to a 4-2 win over George Mason on Wednesday night at Summers-Taylor Stadium.

George Mason scored first in the 14th minute by Tunde Akinlosotu for his first career goal for the Patriots. However, the Bucs retaliated 14 minutes later with Joao Ramalho’s (Monte Santo, Brazil) first goal of the season.

Ramalho received a cross from sophomore Luke Parker (Memphis, Tenn.) from inside the box. After the ball cleared several Mason defenders, Ramalho knotted the game at 1-1 as he snuck the ball over the keeper’s head.

The Blue and Gold earned their first lead of the season as Javier Alberto (Johnson City, Tenn.) scored his first collegiate goal. Cameron Woodfin (Old Hickory, Tenn.) dished a pass from nearly 25 yards out, and Alberto drilled a shot that found the right side to pull ahead 2-1 with nine minutes remaining in the first half.

At the conclusion of the first 45 mintues, ETSU was dominating the possession for the final 20 minutes. The Bucs outshot the Patriots 8-2 with 4-1 on goal, and Mitchell Cecatiello (Pascagoula, Miss.) led ETSU with three shots on goal.

With back and forth momentum between the two teams coming out of the half, Mason tied the game up at a pair as Henning Dirks drilled a shot past the ETSU keeper at the 69th minute.

The Bucs battled back as Ramalho took a shot from the left side. The Mason keeper saved the ball with a dive to his left, but Woodfin tapped in the go-ahead goal off the rebound in the 78th minute to take the 3-2 lead.

With nine minutes remaining in the second half, a George Mason player got tied up with a Buccaneer in the Patriot box. Cameron Schneider (Knoxville, Tenn.) took the penalty kick for the Bucs and drilled a shot into the top right corner to move the score to 4-2.

“We have to feel pretty good about our next match. We are at home today and Saturday, and we want this place to be a tough place to play”, said head coach Bo Oshoniyi. “This is a great home field advantage for us, and we need to get into a rhythm that I think we found tonight.”

ETSU will continue their home stand on Sept. 3rd against Appalachian State (0-1). Kickoff between the Bucs and Mountaineers is set for 7 p.m.