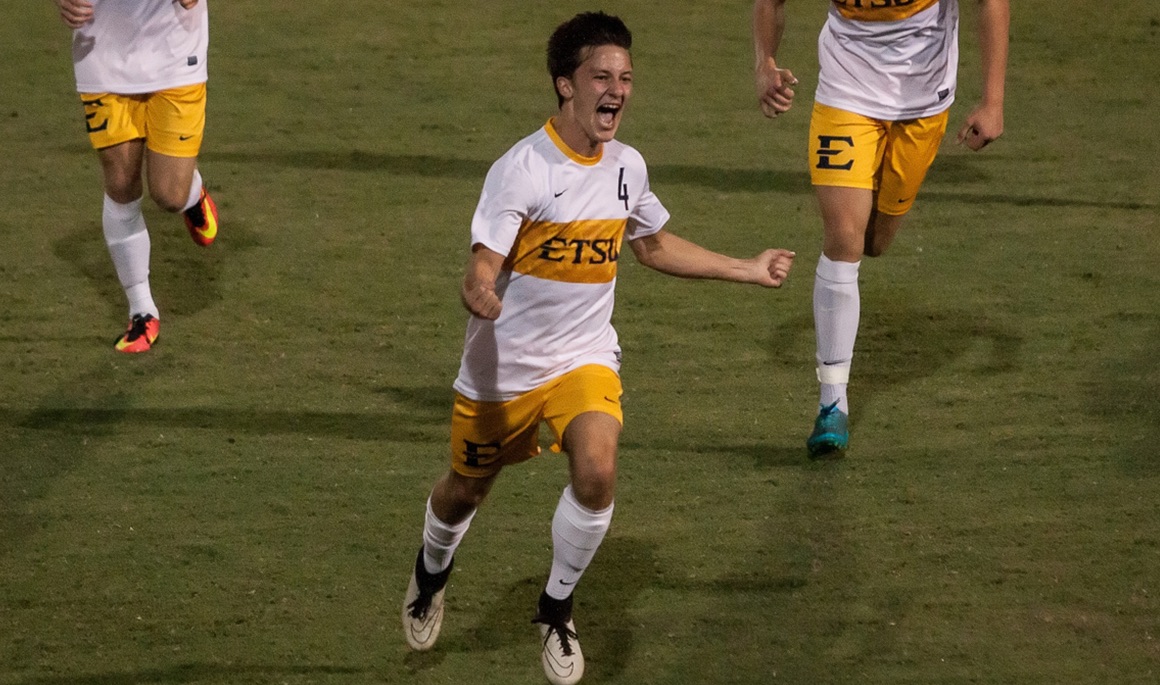 JOHNSON CITY, Tenn. (Sept. 3, 2016) – Cameron Woodfin’s (Old Hickory, Tenn.) game-winning goal and the Buccaneers’ solid defense gave the ETSU men’s soccer team a 1-0 shutout over Appalachian State at Summers-Taylor Stadium on Saturday night for its first shutout of the season and its first win over the Mountaineers since 2010.

The first half was a back and forth battle for ETSU and Appalachian State. Neither team had taken a shot 18 minutes into the match. The Mountaineers took their first shot off a free kick in the 18th minute by Jordan Melia. A Buc fouled a Mountaineer just a yard outside of the ETSU box, and Melia took the free kick. However, his shot sailed wide right to keep the score level.

At the half, both teams took one shot each with Cameron Schneider (Knoxville, Tenn.) taking the lone shot on goal for the Blue and Gold.

The second half was polar opposites for both teams as ETSU tallied seven total shots and Appalachian State took three in the second 45 minutes.

ETSU broke the tie in the 51st minute off a counter-attack. Fletcher Ekern (Knoxville, Tenn.) worked up the middle of the pitch. With the ASU box nearing, Ekern fed the ball off to his left to Woodfin, who drilled his first shot of the match into the right side of the net to give ETSU the 1-0 lead.

“It started with good high pressure on Ekern’s part. We have been working on it, so it is real important that we go as a unit. He kept pushing forward, and I knew I had to support him when he flipped it through to me. It was easy from there to score the goal,” said Woodfin.

The Mountaineers tried to rally with minutes remaining in the match as they were able to give the Buccaneers several scares with shots and cross attempts, but the ETSU defense stayed tough throughout the night and cleared every chance.

Left-back for the entire match, Warren Austin (Kingsport, Tenn.) cleared multiple attacks for Appalachian State. Both centrebacks, Chase Clack (Memphis, Tenn.) and Yera Sissoko (Troyes, France), for ETSU played a clean game as they minimized the shots taken within the box for the Mountaineers. Joe Pickering (East Sussex, England) also played well as he made several clearances downfield that killed time towards the end of the match.