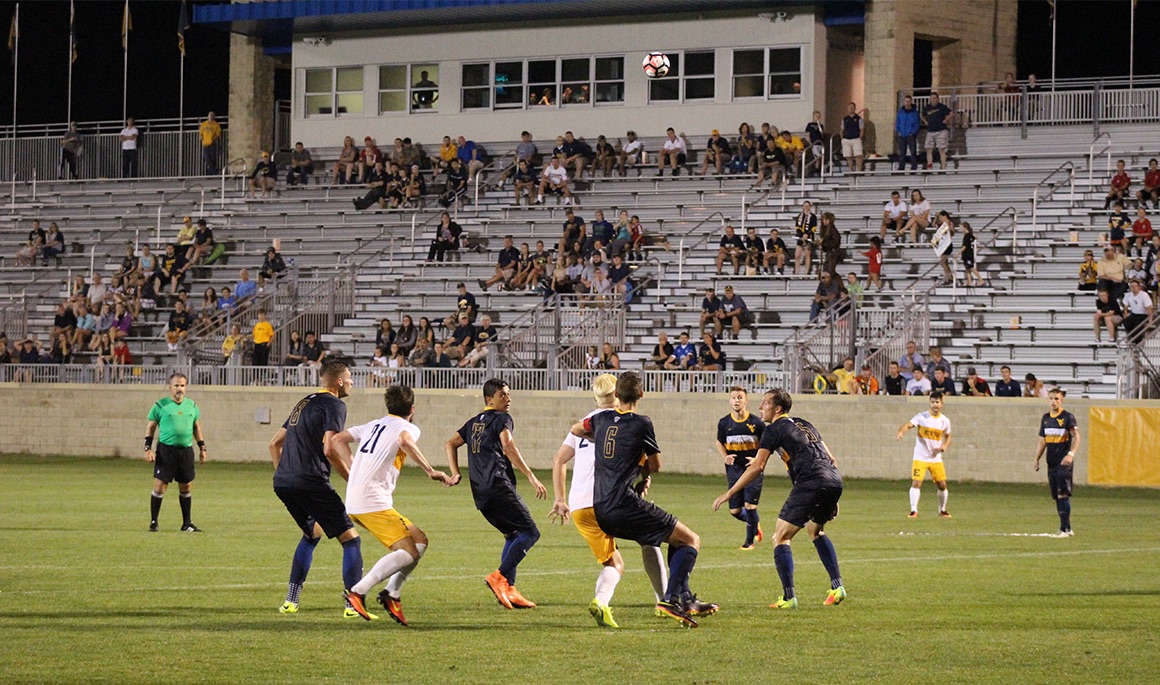 MORGANTOWN, W. Va. (Sept. 9, 2016) – Despite firing seven shots in the second half, the ETSU men’s soccer team fell to No. 22 West Virginia in overtime in Morgantown, W. Va. after the Mountaineers scored the golden goal in the 100th minute off a free kick.

The Bucs had solid defense all night including holding the Mountaineers scoreless in regulation even with WVU taking 17 shots with eight on goal. Sophomore goalkeeper, Jonny Sutherland (Chester, U.K.), made six terrific saves throughout the match including two team saves by the Buccaneer backline.

“The boys left it all on the field tonight against a very good West Virginia team,” said head coach Bo Oshoniyi. ”WVU is a good team, and we went toe-to-toe with them for 100 minutes.”

The first half was a slow attack for ETSU as it only struck three shots in the first half. Ben Holt (Knoxville, Tenn.) took the only shot on goal and made the Mountaineer keeper dive to his left to keep the game level.

The Bucs found offensive success in the second half as they took seven shots including six in the final 23 minutes of regulation. Mitchell Cecatiello (Passcagoula, Miss.) and Joao Ramalho (Monte Santo, Brazil) gave ETSU a glimpse of upsetting the nationally-ranked Mountaineers late in the match. With seconds remaining in the second half, Ramalho took a corner from the right side of the pitch, and with nine seconds left, Cecatiello put a head on the cross. However, the shot went above the cross bar to end regulation in a 0-0 tie.

In the first overtime match of the season, ETSU had chances to put the game away halfway through the period as Fletcher Ekern (Knoxville, Tenn.) and Holt each took a shot on goal. Even after getting called for three fouls in overtime, West Virginia was able to tap in the golden goal off a free kick.

The Mountaineers were awarded a free kick with 28 seconds left in the first overtime. They took advantage of the ball bouncing around in the box off the cross, and Logan Lucas tapped in his first goal of the season to survive the ETSU scare.