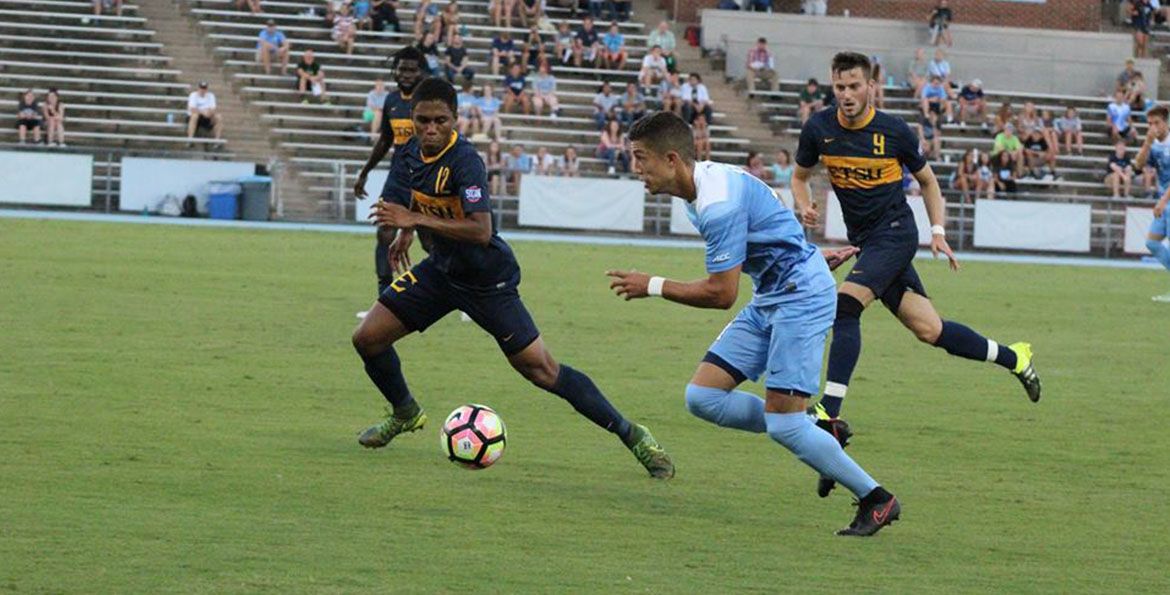 JOHNSON CITY, Tenn. (Sept. 16, 2016) – Coming off the biggest win in ETSU men’s soccer history, the Bucs will return home to face I-26 foe UNC Asheville at Summers-Taylor Stadium on Sunday, Sept. 18 with kickoff set for 7 p.m.

With the 1-0 upset of the top-ranked North Carolina Tar Heels, ETSU is 3-1 in its last four matches including going 2-0 on its home turf. In a span of the last four games, the Blue and Gold have allowed just three goals (0.75 goals per game) – which is the lowest goals allowed average in a four-game span since the end of last season.

The Buccaneer defense has been red-hot lately as it has only allowed one goal in the previous three games. Centrebacks Joe Pickering (East Sussex, England) and Chase Clack (Memphis, Tenn.) were pivotal players against the Tar Heels and have worked well together including pitching a pair of shutouts in the last three games – which is tied for second in the SoCon. Ben Holt (Knoxville, Tenn.), Warren Austin (Kingsport, Tenn.), and Charles Blankenship (Memphis, Tenn.) have also contributed to the defensive success as outside backs.

Jonny Sutherland (Chester, U.K.) has a save percentage of .909 in the last three matches with ten saves in the 282 minutes played between the posts. From the start of the season, he has raised his save percentage from .300 to .619 after allowing just one goal in the previous three games.

Offensively, ETSU averages 1.4 goals per game, which is fourth in the SoCon. Fletcher Ekern (Knoxville, Tenn.) scored the golden goal to defeat the top-ranked Tar Heels for his first goal of the season and his second game-winning goal of his career. Cameron Woodfin (Old Hickory, Tenn.) tallied his second assist of the season off Ekern’s goal, which is tied for second in the SoCon. Woodfin is also tied for third in the conference in points (6).

UNC Asheville started its season cold going 0-5 on the road and could only score three goals in that stretch. The team picked up its first win of the season in the home-opener against UNCG - the 2015 SoCon Regular Season Champs. The Spartans scored first in the 66th minute off a penalty kick, but the Bulldogs were able to retaliate and fend off 17 UNCG shots to win 2-1 at Greenwood Field.

The Bulldogs were predicted to finish seventh out of nine teams in the Big South. In 2015, they finished in eighth place with a 6-12-1 overall record. UNC Asheville was knocked out in the first round of the Big South Tournament by Winthrop, who ultimately claimed the title crown.

The Bucs and Bulldogs have met twice on the pitch in the regular season and both have come out with a win. ETSU won in Johnson City in 2010, 2-1, in double overtime but fell 1-0 at Greenwood Field in 2009.

UNC Asheville has been outscored (15-5) and out-shot (108-66) in the six matches this season. Each of its goals has been scored by a different player. Zach Joens scored the lone game-winning goal of the season for the Bulldogs in the win versus UNCG. The Big South leader in saves, Chris Katt, has started the bulk of the matches and has a .667 save percentage and has totaled 30 saves, an average of five per outing.

The Bulldogs rank second in the Big South with 31 saves and also second with 39 corners.