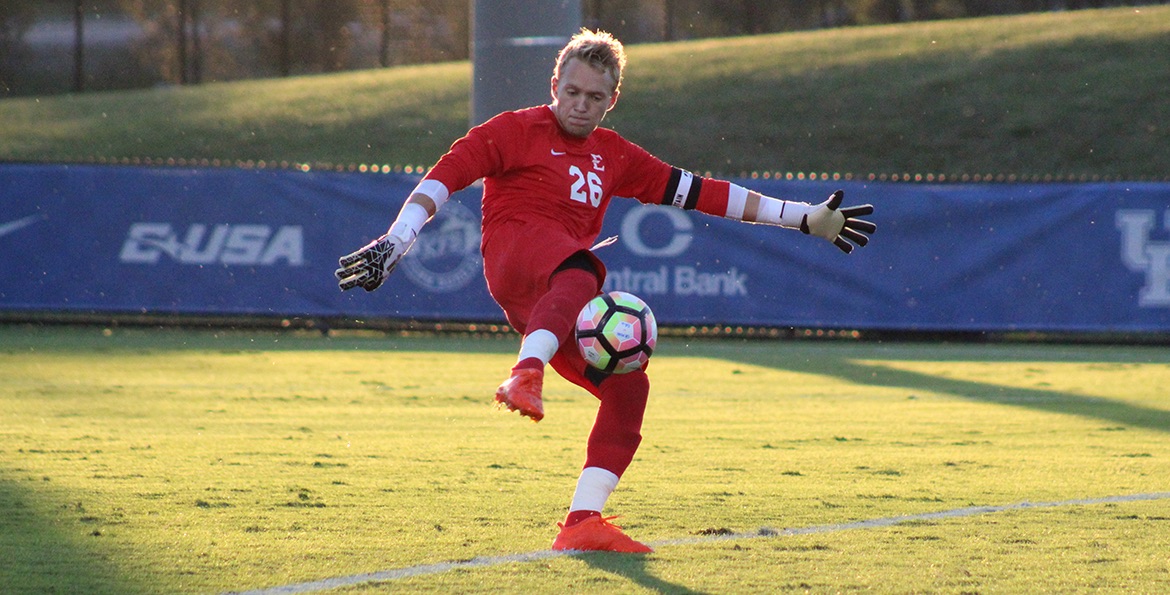 LEXINGTON, Ky. (Sept. 21, 2016) – The ETSU men’s soccer team took its third team of the season to overtime on Wednesday night as the Bucs fell in double overtime 1-0 to Kentucky at The Bell.

ETSU had a golden chance to get ahead early in the seventh minute as Fletcher Ekern (Knoxville, Tenn.) flicked the ball to Mitchell Cecatiello (Pascagoula, Miss.) on a counter attack. Cecatiello found himself in a two-on-one situation and drilled a shot on goal, but the Kentucky keeper made a dive to his right to keep the score level at 0-0.

The Wildcats went into halftime with the narrow lead in shots on goal (2-1) and total shots (7-3). Connor Probert took the two shots on goal for UK, and Cecatiello tallied the lone shot on goal for the Blue and Gold.

In a back-and-forth match in the second half, Kentucky had a chance to put the game away in the 86th minute off a set piece free kick. Charlie Reymann found the ball in the ETSU box and put a shot on net. Reigning TopDrawerSoccer.com National Team of the Week member, Jonny Sutherland (Chester, U.K.), made a tremendous save to keep the game tied at 0-0 and force overtime.

ETSU and UK fought to maintain possession in the first ten minute overtime period, but neither team was credited with a shot in the first overtime.

The second overtime was different as each team tallied a shot, but UK was able to find the net to sneak out with a 1-0 win. Kentucky took advantage of a failed clearance and allowed Andrew Mckelvey to tap in the goal with 2:38 left in the period.

Kentucky outshot ETSU 13-4 with 6-1 on goal. Sutherland made five saves against the C-USA foe, which tied a season high for the sophomore. The Wildcats have yet to lose a match at The Bell to ETSU in three previous meetings in Lexington, Ky.

ETSU (4-3) will continue the road trip with No.18 Furman Paladins at Stone Stadium on Sept. 27. Kickoff for the SoCon opener is set for 7 p.m.