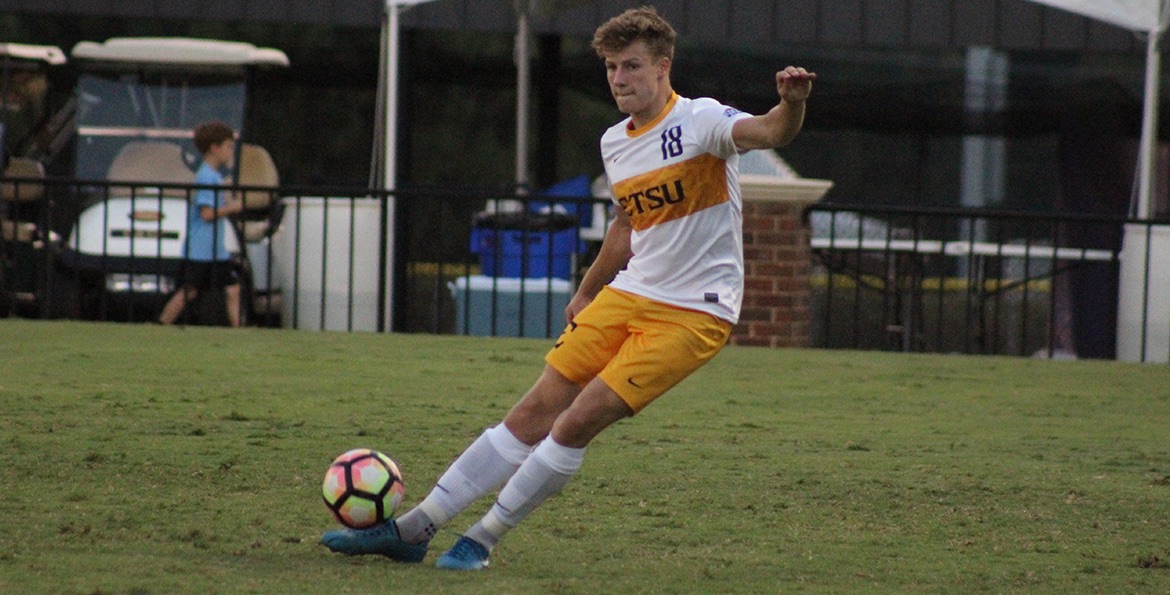 GREENVILLE, S.C. (Sept. 27, 2016) – The ETSU men’s soccer team continues to shutout opponents as it held No. 25 Furman to a 0-0 tie to open Southern Conference play on Tuesday night at Stone Stadium.

519 minutes…that is how long is has been since the Bucs have allowed a goal in regulation, which shatters the previous record of 332:05 minutes in 2013. ETSU extended the clean sheet record as it limited Furman to 14 shots with five on goal.

Furman dominated the first half where it took nine shots with four on goal. The Bucs could only muster one shot by junior midfielder Cameron Woodfin (Old Hickroy, Tenn.). Sophomore goalkeeper Jonny Sutherland (Chester, U.K.) tallied four saves to keep the sheet clean at the half.

The second half was a different match as the Bucs were able to gain momentum and possession in the half. ETSU took eight shots with three on goal in the final 45 minutes.

The best chance for the Blue and Gold came in the 67th minute when the Bucs worked off a counter attack. Fletcher Ekern (Knoxville, Tenn.) led the surge up the right side. He flicked a cross into the 18-yard box to Mitchell Cecatiello (Pascagoula, Miss.), but he mistimed the ball to end the threat.

The Bucs took the Paladins into overtime for their fourth overtime match in the previous five matches. Furman came out firing in the first overtime with two shots and held ETSU without a shot in the first ten minutes.

ETSU tried to put the game away as defender Ben Holt (Knoxville, Tenn.) took a shot on goal in the 103rd minute. After corralling the loose ball, the Knoxville native took a shot just outside of the penalty box, but the Paladins defended the ball away perfectly to keep the game knotted at 0-0.

“It was a great result. To open in the SoCon on the road against the defending champions and to get a draw here just allows us to move forward,” said Bo Oshoniyi. “We were able to weather the storm in the first half. Jonny makes a couple great saves in the first half to keep it at zeros.”

“We made some adjustments at halftime, and we played a little bit better of a game. We even had a chance to knick a goal, but I am proud of the boys. They are buying into our identity.”

The Bucs will return home on Saturday, Oct. 1 to face off against Mercer. The game is set to kickoff at 7 p.m. at Summers-Taylor Stadium.