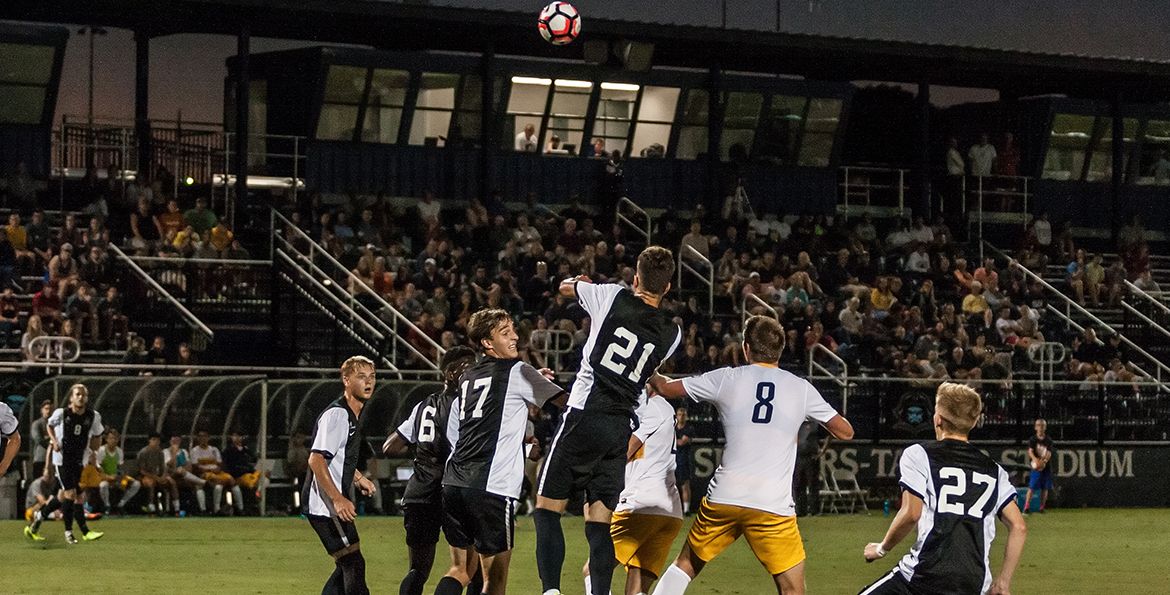 JOHNSON CITY, Tenn. (Sept. 30, 2016) – After tying with Furman to open SoCon play, the ETSU men’s soccer team will return to Summers-Taylor Stadium on Saturday at 7 p.m. to face off against Mercer in the first SoCon home match of the season.

Defense has been exceptional for the Blue and Gold. They have not allowed a goal in regulation in the last six matches. The active 519 minute scoreless record shattered the previous record of 332:05 minutes achieved in 2013. Jonny Sutherland (Chester, U.K.) has led the defensive surge in that span as he has totaled 23 saves with a 0.31 goals against average and a .920 save percentage. In the previous six games, Sutherland has totaled four shutouts to raise his career shutouts to nine.

The Bucs love playing at home this season as they tote a 3-0 record. ETSU has outscored the opposition 6-2 including pitching two shutouts at Summers-Taylor Stadium. Five different players have scored a goal at home led by junior midfielder Cameron Woodfin’s (Old Hickory, Tenn.) two goals, and the Bucs have outshot opponents 46-16 with 19-8 on goal on their home pitch.

Mercer has the second best RPI ranking in the conference at 71, behind ETSU. The Bears have played tough competition this year including then No. 24 South Carolina and playing two games in the SoCon/Big South Challenge in Spartanburg, S.C.

They opened conference play with a 2-0 win at home versus Wofford. The Bears scored both goals in the first half including one at 26 seconds into the match for the fastest goal scored in the SoCon this year.

The Bears are 2-1 on the road this season, and they look to spoil ETSU’s perfect home record as they did last season.

Junior forward Will Bagrou will be the player to watch for Mercer. He has scored the two fastest goals in the SoCon this year and is second in the conference in points (11), points per game (1.22), goals scored (5) and goals per game (0.56). However, the Bears have other threats to score this season including Max Poore and Conner Antley, who each have two goals this season.

Defensively, Mercer is led by its redshirt junior goalkeeper Jeremy Booth. He is tied for third in save percentage and tied for second in total saves in the SoCon. Booth is also fourth in the conference in goals against average with 1.10.