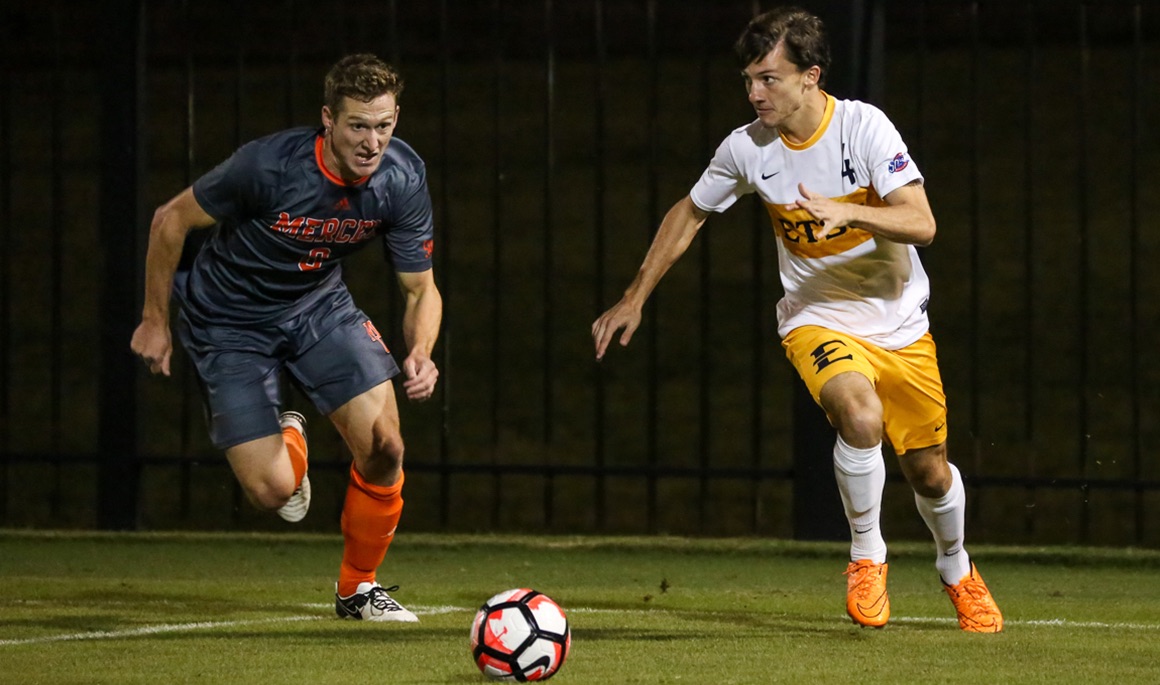 JOHNSON CITY, Tenn. (Oct. 1, 2016) – In just its third win in the last 12 head-to-head matchups, the ETSU men’s soccer team shutout Mercer 2-0 at Summers-Taylor Stadium on Saturday night for its fifth shutout in the previous seven games this season.

Mercer dominated the possession for most of the first half. However, ETSU has faced adversity in its last five games as it has allowed 34 shots including 16 in the last two matches. Tonight’s match was no different as Mercer took 14 shots to ETSU’s three.

The defense was pivotal as they limited Mercer to four shots on goal in the first half, and goalkeeper Jonny Sutherland (Chester, U.K.) made three saves to keep the game tied at 0-0 going into halftime.

In the second half, the Bucs came out firing with two shots in the first ten minutes. Chase Clack (Memphis, Tenn.) nearly netted a goal off a corner kick, and Cameron Woodfin (Old Hickory, Tenn.) took an open shot that sailed just right.

The Bears tried to score off a counterattack, but freshman centreback Joe Pickering (East Sussex, England) made a sliding tackle outside of the box to end the attack.

With 15 minutes remaining in the second half, Serge Gomis (Dakar, Senegal) struck a laser shot from nearly 25 yards out. However, the Mercer keeper, Jeremy Booth, made a diving save to his left to keep the game level at 0-0.

Just a minute later, Mitchell Cecatiello (Pascagoula, Miss.) rocketed a shot towards the right side of the net, but the Mercer keeper made another save to keep it tied.

ETSU scored its first goal in the 83rd minute for its first goal in the last two matches. The goal was setup by redshirt senior Joao Ramalho (Monte Santo, Brazil) who booted a shot on goal, but Booth made a diving save to his left. However, Woodfin beat Mercer to the rebound and tapped the ball into the right side of the net for his third goal of the season.

Gomis put the game away with seconds remaining in the match for his first goal as a Buccaneer. Woodfin worked off a counter attack and fed Gomis the ball to his right. Gomis went one-on-one with Booth and drilled the ball into the left side of the net.

With its fifth shutout in the last seven games, ETSU extends its scoreless record in regulation to 609 minutes, which dates back to Aug. 31 versus George Mason.

With the 2-0 win, ETSU moves to 5-3-1 on the season and 1-0-1 in the conference. Mercer falls to 6-4 overall and 1-1 in the SoCon. This was the second time ETSU has defeated Mercer at Summers-Taylor in seven previous matchups in Johnson City.

The Buccaneers will hit the road at Wofford on Oct. 4. The game is set to begin at 7 p.m. in Spartanburg, S.C.