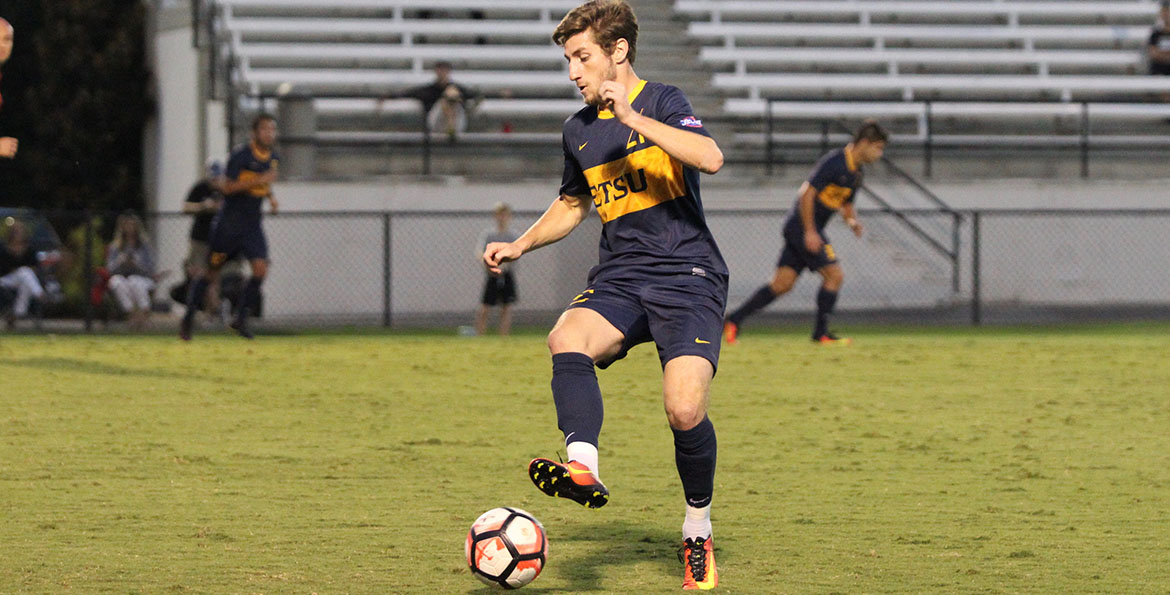 SPARTANBURG, S.C. (Oct. 4, 2016) – After holding opponents scoreless in the last 704:47 minutes in regulation, the ETSU men’s soccer team surrendered a goal in the 56th minute that allowed Wofford to sneak out a 1-0 win on Tuesday at Snyder Field.

Even though going into half tied 0-0, the Terriers dominated most of the first half. However, Wofford held a narrow 8-6 lead in shots and a 2-1 advantage with shots on goal.

Fletcher Ekern (Knoxville, Tenn.) and Serge Gomis (Dakar, Senegal) each recorded a pair of shots for ETSU, and Mitchell Cecatiello (Pascagoula, Miss.) put the only shot on goal in the first half.

To start the second half, the Blue and Gold came out with energy with multiple chances to find the back of the net. Jeffrey George (Safety Harbor, Fla.) hustled down the pitch a few minutes into the second half, but a teammate flicked the ball a little long and trickled over the end line before George could corral it.

Wofford got on the board first in the 56th minute as Johnson City, Tenn. native Lucas Altman netted his first collegiate goal. A cross from the left side found Altman’s head, and he snuck it past Sutherland to the left side to take the 1-0 lead.

Within a span of five minutes, the Bucs had three chances to tie the game but couldn’t find the net. Joao Ramalho (Monte Santo, Brazil) worked up the left side in a favorable advantage, but when he got the shot off, it sailed wide to end the threat.

Just three minutes later, Ben Holt (Knoxville, Tenn.) took a chance at goal within the 18-yard box. His shoe came off while on the ball. Nevertheless, Holt struck the ball without a shoe, but unfortunately, the attempt drilled the left post and went to a Terrier.

In the 61st minute, Charlie Machell (Newcastle, England) found Ekern off a free kick at the left post. Ekern was able to put a head on the ball at the near post, but the header went just above the cross bar.

Despite the multiple chances for ETSU to tie the game, the Terriers nipped the Bucs to move ETSU to 5-4-1 overall and 1-1-1 in SoCon play, and Wofford advances to 7-3 overall and 2-1 in the conference.

At the end of the game, ETSU out-shot the Terriers 13-12 and put more shots on goal (5-4). Cecatiello drilled three shots with all being on frame to lead the Blue and Gold.

The Bucs next game will be on the road at UNCG. The match between the Bucs and Spartans is set for 7 p.m. on Saturday, Oct. 8 at UNCG Soccer Stadium.