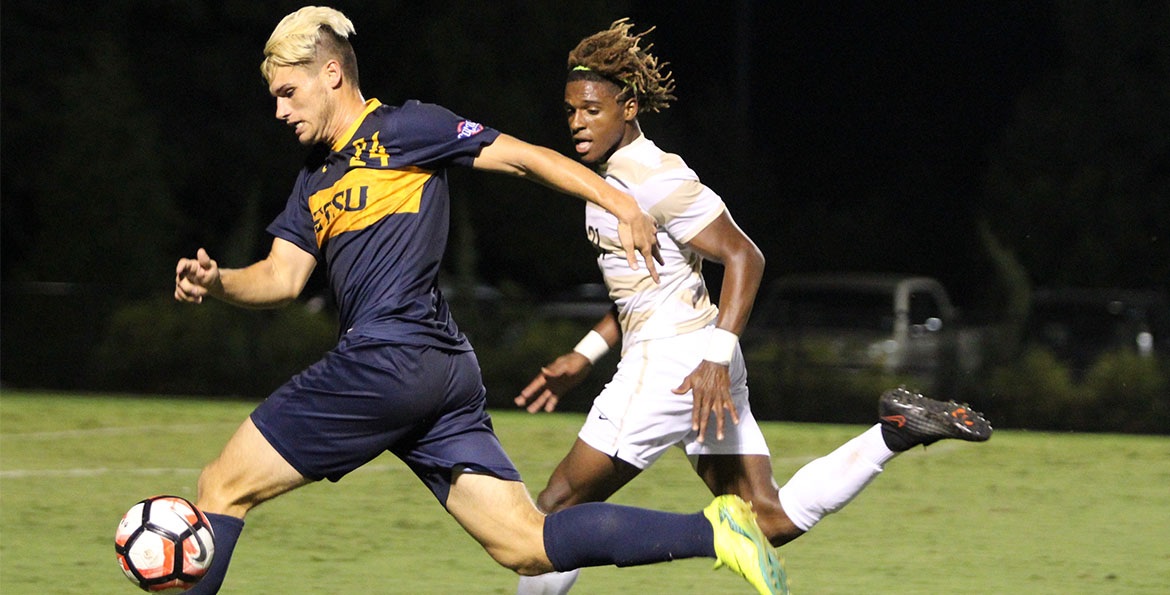 GREENSBORO, N.C. (Oct. 8, 2016) – In wet and rainy conditions on Saturday, Fletcher Ekern (Knoxville, Tenn.) led the ETSU men’s soccer team to a dramatic 4-3 win in double overtime after scoring a hat trick in the 102nd minute in Greensboro, N.C.

UNCG came out swinging early as it took two corners and three shots within the first eight minutes. The third shot found the back of the net off the second corner for the Spartans. Damieon Thomas took a shot within the 18-yard box, but the attempt was saved by ETSU. However, the rebound found Rouven Wahlfeldt who knocked the ball into the left side to take the 1-0 lead.

At the 31st minute, the Bucs were able to tie the game at 1-1 off a penalty kick. In the attacking third, ETSU attempted a shot at the right side of the box, and a UNCG centreback was called for a handball inside the penalty box. The error gave the Bucs a chance to tie the game, and Ekern knocked the ball to the right side just past the senior goalkeeper Logan Rhode to knot the game, 1-1.

Going into the half, the Spartans were out-shooting the Bucs by almost ten shots with 3-1 on goal. SoCon Player of the Month, Jonny Sutherland (Chester, U.K.), was leading the defense with three saves at the half.

Coming out of halftime, most of the possession was held at midfield as neither team was able to get a good chance at goal.

In the 75th minute, Cecatiello worked off a counter-attack and worked his way into the right side of the penalty box. He crossed the ball on the ground past two UNCG defenders and just missed Ekern’s extended foot right in front of the net.

Two minutes later, Leeroy Maguraushe scored his first goal of the season from 23 yards out. The goal put the Spartans up for the second time on the night, but the lead didn’t last long as the Bucs came back to tie the game up at 2-2.

At the 82nd minute, redshirt freshman Javier Alberto (Johnson City, Tenn.) drilled a shot from outside of the 18-yard box to knot the game. It was his second goal of the season for the Johnson City native.

Roughly five minutes later, Ekern worked off a counter with a man on his back. After working his way into the 18-yard box, he was pulled down by the UNCG defender, Casey Penland, inside the penalty box. He was instantly given a red card and gave Ekern a penalty kick. He found the top-right corner to give ETSU its first lead of the night, 3-2.

However, the lead diminished seconds later as the Bucs had an unfortunate bounce to tie the game for a third time. A Spartan drilled a shot inside the penalty box, and Sutherland made the save to his right. Unfortunately, the deflection found a Buccaneer a step away and just crossed the end line to tie the game, 3-3.

For the fifth time in the previous eight matches, ETSU forced an overtime period. It was also the fourth-straight game between ETSU and UNCG that went into overtime.

The first overtime was quiet as there was only one combined shot taken. UNCG’s Faisal Almubaslat took a shot from a few yards out at the 98th minute, but the shot sailed high.

For the third time in the last six games, the Bucs went into double overtime.

Quickly into the second overtime, Cecatiello made a cross to the right side towards Ekern. After faking a defender to his right, Ekern took a left-footed shot from the 18-yard line that curled into the left side of the net. It was his third goal of the night and his second game-winning goal of the season with his first game-winner coming against then No. 1 North Carolina.

"Great win by the boys. They had to battle back after going down a goal, and again, they showed great resolve to get the game-winner on the road in overtime", said head coach Bo Oshoniyi. "We still have a lot of work to do, but I'm proud of the boys".

ETSU will return home to face off against VMI on Oct. 11 at Summers-Taylor Stadium. Kickoff is set for 7 p.m.