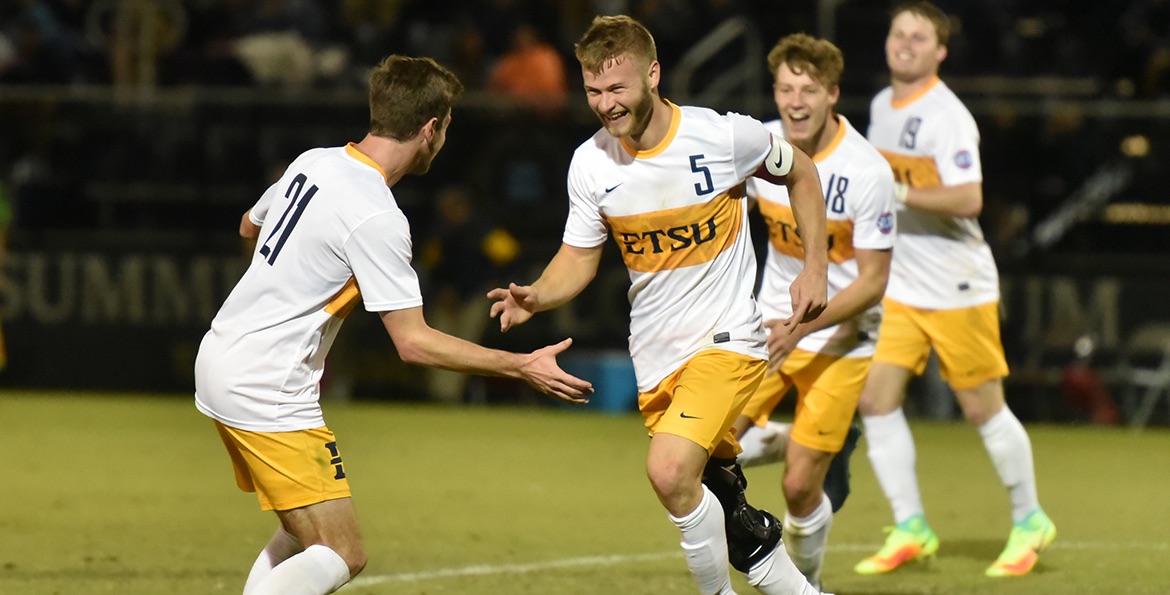 Jeff George celebrates with Mitchell Cecatiello and teammates as he scored his first collegiate goal on Tuesday.
ETSU shuts out sixth opponent in 3-0 win over VMI
VMI at ETSU | October 11, 2016
Related Links

JOHNSON CITY, Tenn. (Oct. 11, 2016) – The ETSU men’s soccer team shutout its sixth opponent of the year en route to a 3-0 win over VMI on Tuesday night at Summers-Taylor Stadium.

The Bucs dominated possession for most of the first half but didn’t fire their first shot off until the 29th minute. ETSU had a chance to pull ahead in the 37th minute when Serge Gomis (Dakar, Senegal) rocketed a left-footed shot. The attempt nearly curled into the top-right corner but missed by inches.

However, the Blue and Gold were able to get on the board late in the first half with a first collegiate goal by Jeffrey George (Safety Harbor, Fla.). Charlie Machell (Newcastle, England) took a corner from the right side, and after feeding a beautiful cross into the middle of the 18-yard box, George went airborne and put a head on the ball. The ball fell just behind the VMI keeper to make the game 1-0 ETSU.

Even with just three shots in the first half, the Bucs maintained most of the possession and led 3-0 in corner kicks.

The Buccaneer offense continued their second half success as the Bucs rattled off four shots in the first 16 minutes. Cameron Woodfin (Old Hickory, Tenn.) set up the second goal of the match after a scrum in the penalty box. He cleared the ball to the right and then flicked the ball to Ekern just a few yards away from the net. Ekern tapped in the easy goal to make it two straight games with at least one goal and four goals in the two-game span.

Gomis extended the ETSU lead by taking advantage of a VMI defensive miscue in VMI’s half of the field. He capitalized on the misplay as he struck his second goal of the year. He found the left side of the net to take the commanding 3-0 lead in 65th minute.

The Bucs tried to extend their lead late with six shots in the last ten minutes of regulation, but Robert Allen, the VMI goalkeeper, saved the attempts and held the game at 3-0.

With a pair of assists on the night, Woodfin has tallied either a goal or an assist in each of the five home games for the Blue and Gold. He has currently tallied at least one assist in four straight home games to lead the Bucs in total assists with six on the year.

ETSU dominated offensively maintaining most of the possession on the night and out-shot the Keydets 18-1 with 7-1 on goal. Six Buccaneers attempted at least two shots on the night, and Ekern put two shots with both on goal in the Tuesday nightcap.

The Buccaneers will continue their home stretch by seeking revenge on Wofford – who defeated the Bucs 1-0 in Spartanburg, S.C. earlier this year. The Bucs and Terriers will meet on Oct. 15th at Summers-Taylor Stadium with kickoff set for 7 p.m.