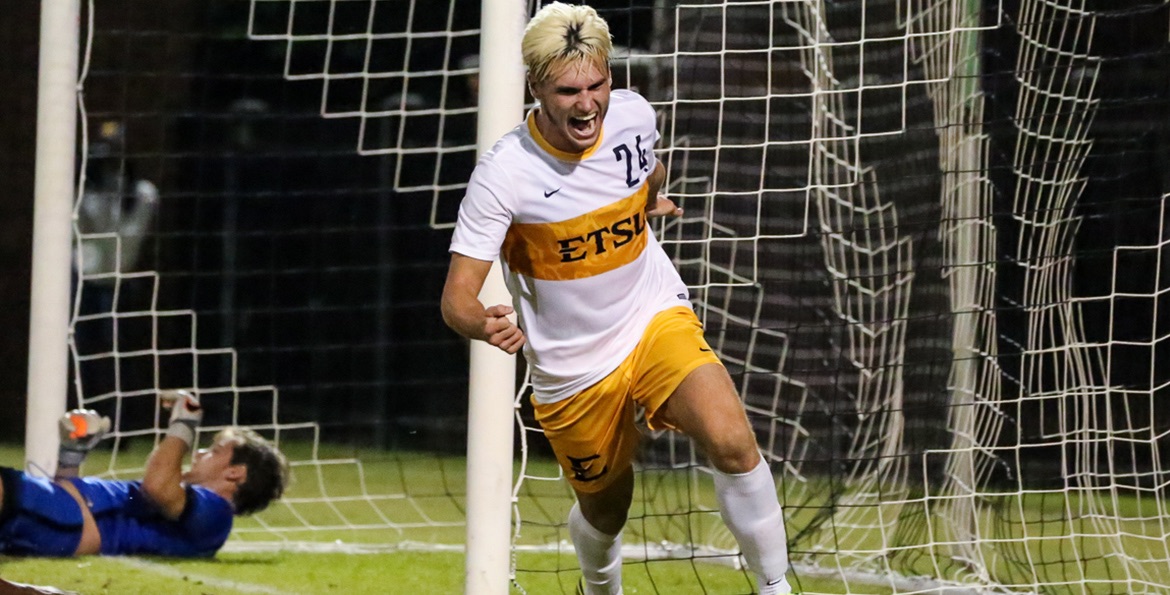 JOHNSON CITY, Tenn. (Oct. 15, 2016) – With a 2-1 comeback victory over Wofford at Summers-Taylor Stadium on Saturday night, the ETSU men’s soccer team jumped into first place in the SoCon standings after netting a pair of goals by Fletcher Ekern (Knoxville, Tenn.) and Joao Ramalho (Monte Santo, Brazil).

Within a few minutes of first touch, ETSU had some key chances to score including two breakaway opportunities that were ended by the Wofford backline. However, the Terriers got on the board first with an ETSU defensive miscue. A Buccaneer tried to clear the ball, but the ball found the left side of the ETSU goal to give Wofford the 1-0 lead in the 16th minute.

The Buccaneer attack didn’t give up as they tallied shot after shot throughout the first half. ETSU was able to capitalize late in the half with Ekern’s sixth goal of the year.

ETSU was counterattacking up the middle with Cameron Woodfin (Old Hickory, Tenn.) on the ball in the 41st minute. After knocking the ball up to his left, Ramalho worked up the left side to lay a cross into the box. Ekern ran up the middle into the Wofford penalty area and put a header on the ball, which found the left side of the goal to tie the game, 1-1

With the goal, Ekern has scored in three straight games dating back to Oct. 8 at UNCG, where he scored the only hat trick in ETSU program history.

Going into the half, ETSU had all the momentum and were out-shooting Wofford 6-5 with the Terriers leading 3-2 in corners.

Trying to keep the momentum going, head coach Bo Oshoniyi kept his same lineup in hopes to continue the success. The idea proved pivotal in the 66th minute when Charlie Machell (Newcastle, England) curled a long cross from almost midfield. The ball found red-shirt junior Jeff George (Safety Harbor, Fla.), and he put a head on the ball to give way to Ramalho. After fancy footwork inside the box, Ramalho drilled a shot that found the top right corner to pull ahead 2-1.

Wofford didn’t surrender even down for the first time in the match. In the 87th minute, senior forward Matthew Aurednik drilled a shot from within the 18-yard box, but sophomore goalkeeper Jonny Sutherland (Chester, U.K.) put a hand on the shot, which deflected the ball at the crossbar. The ball fell to an ETSU player, which was cleared to end the threat.

Wofford wasn’t able to muster another chance at goal, and the Bucs were able to watch time expire and secure the 2-1 win. With the victory, ETSU moves to 8-4-1 overall and 4-1-1 in the SoCon, and Wofford drops to 8-5 overall and 3-3 in the conference.

With the ETSU win and UNCG defeating Mercer on Saturday, the Bucs sit atop of the SoCon leaderboard with 13 points.

Woodfin was able to tally an assist off the game-tying goal, which extended his assist home streak to five games. The Bucs are now 7-0 when Woodfin tallies an assist or scores a goal this season.

ETSU’s next match will be against VMI in Lexington, Va. on Tuesday, Oct. 18th. Kickoff is set for 4 p.m.