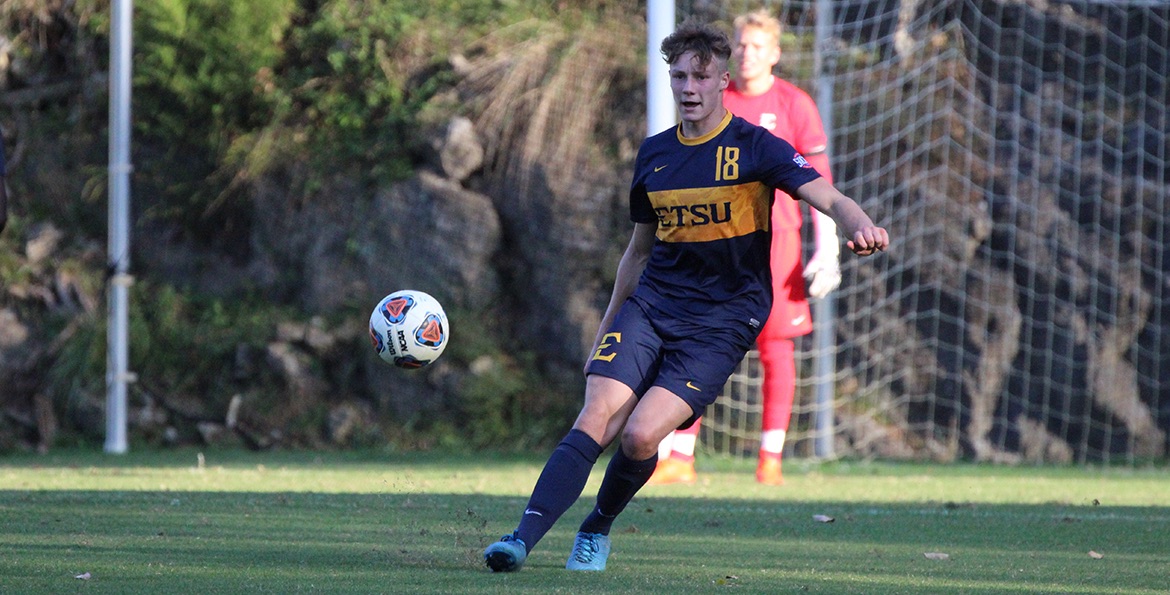 LEXINGTON, Va. (Oct. 18, 2016) – With multi-goal and multi-assist performances at Patchin Field on Tuesday afternoon by the Bucs, the ETSU men’s soccer team defeated VMI 5-1 after out-shooting the opposition 28-6 while putting 14 shots on goal.

Junior forward Fletcher Ekern (Knoxville, Tenn.) and freshman defender Joe Pickering (East Sussex, England) each scored a pair of goals in Lexington, Va., and Joao Ramalho (Monte Santo, Brazil) and Cameron Woodfin (Old Hickory, Tenn.) each recorded two assists against the Keydets. Pickering’s goal in the 3rd minute was the fastest goal scored this season and was his first collegiate goal at ETSU. In the last two games, Ramalho has recorded three assists and a game-winning goal against Wofford at home.

After scoring in the 23rd minute, Ekern extended his goal-scoring streak to four straight matches and has netted seven goals in that span. Woodfin tallied another assist on Tuesday and extends his streak to three straight games with an assist, and the Bucs are 8-0 when he is on the scoresheet.

The Buccaneers recorded their fastest goal this season in the 3rd minute when Pickering went up for a header a few yards out from goal. Ramalho took the corner kick from the left side, and he curled the ball into the middle of the box and found Pickering’s head who drilled the back of the net to take the early 1-0 lead.

Just 20 minutes later, the Blue and Gold extended its lead off another set piece. Just entering the game, Woodfin came in to take the corner kick for ETSU. He curled the right-footed cross into the box, and both teams fought for possession just steps in front of the VMI goal. Both the VMI keeper and Ekern went airborne, but Ekern won the battle and knocked the ball into the nylon to take the 2-0 lead.

Ekern and Woodfin matched up again in the 36th minute and took a commanding 3-0 lead. Woodfin worked up the left side of the field and found himself one-on-one with the VMI goalkeeper. Woodfin took a shot, but Robert Allen, VMI’s goalkeeper, saved the attempt. However, the rebound found Ekern who tapped in the open net goal for his second goal and Woodfin’s second assist of the match.

The Bucs went into halftime dominating possession and were out-shooting the home team 17-1 with 11-0 on goal. Ekern recorded eight shots with five on goal, and Woodfin recorded a pair of shots with both on goal. Seven other Buccaneers took one shot each with Pickering being the only one to find the back of the net.

ETSU came out of halftime sluggish, and VMI took advantage by drawing a foul inside the ETSU penalty box. The head referee gave two Buccaneers a yellow card on the play and awarded the Keydets a penalty shot. VMI’s leading goal scorer, Sam Moffatt, drilled the bottom right corner and pulled the game to 3-1.

After conceding the goal, the Bucs retaliated nine minutes later and did so off yet another set piece. Ramalho took the free kick a few yards outside of the 18-yard box from the left side. After feeding a low pass, Pickering redirected the ball into the right side of the net to pull back ahead by three goals.

Woodfin wanted to score a goal of his own and did so after being set up by a beautiful through pass from Javier Alberto (Johnson City, Tenn.). Alberto worked up the middle of the pitch and saw Woodfin in an advantage and fed a through pass to the junior midfielder. Woodfin corralled the ball and slipped past the VMI goalkeeper to score his fourth goal of the year.

With just over 20 minutes remaining in regulation, the Bucs sent in substitutions to get action off the bench. ETSU had several chances to score another goal but saw the final seconds of the game clock tick off to seal the 5-1 victory.

The Bucs will play their second-to-last home match of the season on Saturday, Oct. 22 against Furman. The game is set for 7 p.m. at Summers-Taylor Stadium.