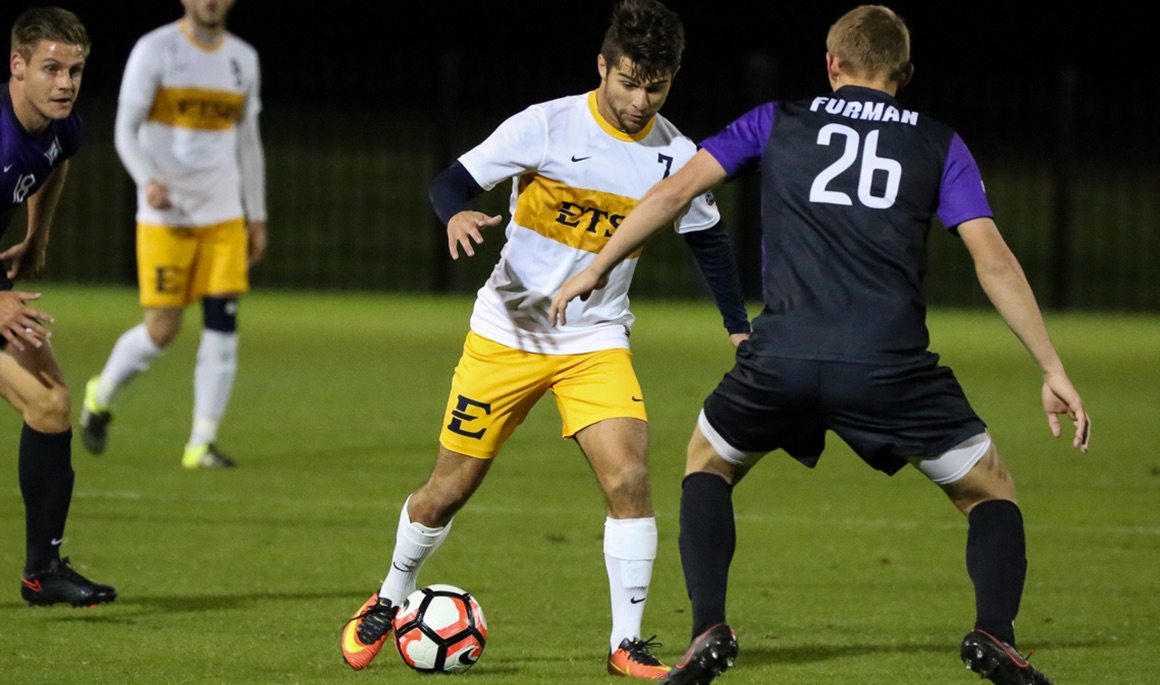 JOHNSON CITY, Tenn. (Oct. 22, 2016) – Even out-shooting the opposition 16-8, the ETSU men’s soccer team played to a scoreless tie with Furman at Summers-Taylor Stadium on Saturday night.

Fletcher Ekern (Knoxville, Tenn.) and Joao Ramalho (Monte Santo, Brazil) combined for nine shots on the night, and sophomore goalkeeper Jonny Sutherland (Chester, U.K.) tallied a save in the overtime thriller. The United Kingdom native and the ETSU defense pitched their seventh shutout of the season, and Sutherland picked up his 12th career shutout in front of the home crowd.

Mercer defeated VMI at home on Saturday and picked up three points, which vaulted them into sole possession of first place in the conference. By achieving a point in the draw, ETSU moves to second place in the SoCon and sits one point behind Mercer and two points ahead of UNCG after the Spartans fell to Wofford in Greensboro, N.C.

The Bucs and Paladins were fighting back and forth early in the game, but ETSU had the early advantage in shots, 3-1, in the first 15 minutes. Lewis Hawke –Furman’s leading goal scorer – drilled the Paladins first shot that clipped the right post and rolled out of harm’s way.

Neither team recorded a shot for the next 15 minutes until Furman’s Bobby Edet took an open shot that sailed wide right and out of play.

The Blue and Gold were awarded a corner kick in the 34th minute. Ramalho took the set piece kick, and Javier Alberto (Johnson City, Tenn.) found the ball and drilled a left-footed shot. However, the attempt sailed just to the right of the net to keep the game 0-0.

Both Furman and ETSU took just one shot each in the remaining time of the first half. The Bucs were narrowly out-shooting the Paladins 5-3 at the half with 1-0 on goal.

Just five minutes after halftime, Furman’s Eli Pinner rocketed a shot on goal, but an ETSU defender jumped in front of the attempt to clear the ball.

After that shot by Pinner, ETSU started to dominate possession for the next 25 minutes. However Furman almost scored off a corner in the 76th minute as Hawke connected with a header that just missed the ETSU cross bar.

Just a few minutes later, Ekern nearly took advantage of a Furman defensive miscue in the 82nd minute. Max Fisher – the Furman goalkeeper – came out in a one-on-one situation with Ekern. Ekern knocked the ball towards the Furman goal, but a Paladin defender cleared the ball just before it crossed the end line.

ETSU had one last chance at the end of regulation to put the game away, but Fisher made another save on the night. The Bucs had another corner with four minutes remaining, and Alberto took the corner and curled a pass into the penalty area. Jeffrey George (Safety Harbor, Fla.) was able to put a head to the ball, but Fisher made a save to keep the game level.

At the end of regulation, the Bucs and Paladins headed for overtime tied at 0-0. At the time, ETSU was out-shooting the Paladins 11-6 with 3-1 on goal.

The best chance for the Blue and Gold to score the golden goal came in the 97th minute on a counterattack. A Furman defender tripped up an ETSU player, and the Bucs were awarded a free kick from about five yards outside of the Furman box. Ramalho took the free kick, but the Paladin wall stopped the shot that was headed towards the net.

Going into the second 10-minute overtime period, ETSU had another chance in the 103rd minute off another free kick. Ramalho took the free kick and attempted to curl in a cross into the 18-yard box. However, Furman defended the pass well and cleared it with ease.

Ramalho had one last chance in the second overtime on a breakaway opportunity. A teammate snuck a through pass in between two Furman defender, and the Brazil native found himself one-on-one with Fisher. Ramalho took a shot from about ten yards out on the left side, but Fisher made a diving save to his left to preserve the 0-0 tie.