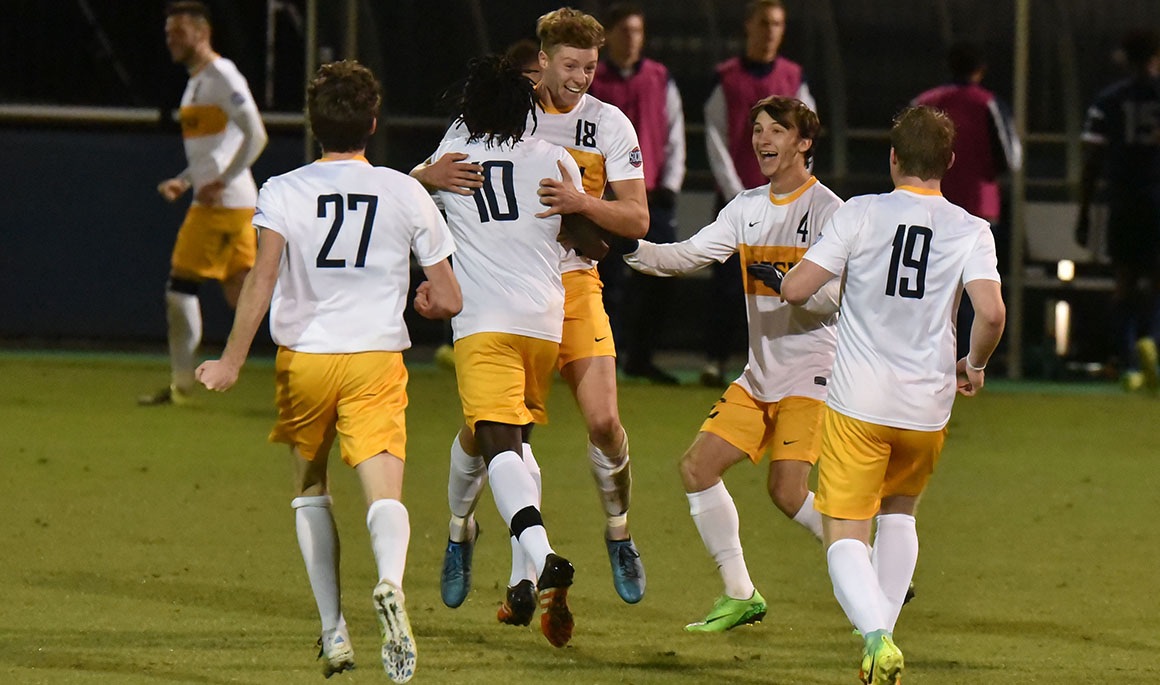 ETSU celebrates senior day with 1-0 shutout and bye into the semifinals of the SoCon Tournament
UNCG at ETSU | October 25, 2016
Related Links

JOHNSON CITY, Tenn. (Oct. 25, 2016) – Backed by a goal in the 31st minute by freshman defender Joe Pickering (East Sussex, England) on senior night, the ETSU men’s soccer team went on to shutout UNCG at home 1-0 on Tuesday for its eighth shutout of the year and clinched a bye into the semifinals of the SoCon Tournament.

With the win, ETSU at least claims the second seed in the SoCon Men’s Tournament, which is hosted by UNCG. But first, the Bucs will face Mercer on Saturday, Oct. 29 in Macon, Ga. to decide who the regular season champs will be. Mercer can tie or win on Saturday, since they have a one-point advantage over the Bucs, but ETSU needs to travel to Mercer and defeat the Bears to claim the regular season crown.

The win tonight over UNCG is the fifth match the Bucs have won or tied (3-0-2) in head-to-head matches with UNCG in program history. The Bucs also remain undefeated all-time at Summers-Taylor against the Spartans, and ETSU evened the all-time record with UNCG at 4-4-3.

With the 1-0 shutout, ETSU has captured eight shutouts this year and finished the season undefeated at home (7-0-1) with six of the eight shutouts coming at Summers-Taylor Stadium. The Buccaneer defense, Chase Clack (Memphis, Tenn.), Ben Holt (Knoxville, Tenn.), Jonny Sutherland (Chester, U.K.), Austin, Sissoko and Pickering, have been pivotal players this season in claiming the eight shutouts.

With the win, ETSU moves to 10-4-2 overall and 6-1-2 in the conference, whereas UNCG falls to 9-6-2 overall and 5-4 in the SoCon. This is the first time since 2013 the Bucs have won double-digit matches. The last time ETSU won at least ten matches, the Bucs won the Atlantic-Sun Tournament and made it to the NCAA Tournament.

ETSU had a chance early to find the back of the net in the 10th minute. Sophomore midfielder Luke Parker (Memphis, Tenn.) took a shot from just outside of the penalty area, but the shot sailed high on the Memphis native.

In the 22nd minute, the Bucs had a set piece opportunity in the attacking third. Serge Gomis (Dakar, Senegal) took the free kick that was straight on goal, but again, the attempt went high.

27 minutes into the game, the ETSU offense started to get chances to find the back of the net, but the UNCG defense stayed strong and fended off multiple threats. However, just four minutes later, Pickering made the Spartans pay with his third goal of the season.

For the remaining 15 minutes in the first half, neither team found momentum and ended the period with ETSU leading 1-0. The Spartans took just one shot with it being on goal. The Buccaneer defense shutdown the Spartan attack as UNCG is tenth in the country in shots per game (15.69) and fifth in shots on goal per game (7.31).

The action didn’t end there as the Bucs tried to extend their lead just ten minutes out of halftime. Fletcher Ekern (Knoxville, Tenn.) and Cameron Woodfin (Old Hickory, Tenn.) worked off a counter, but the UNCG defense stood tall again and cleared the ball.

In the 65th minute, UNCG attempted to knot the game up with two headers, but both chances went right of goal to preserve the 1-0 lead for ETSU.

The Buccaneer offense had two key opportunities to find the net with both coming in a four-minute span. In the 75th minute, Ekern had a breakaway chance, but four UNCG defenders caught up to the striker and forced a turnover. Just four minutes later, Javier Alberto (Johnson City, Tenn.) tried to double the lead but hit the post. The Johnson City native rocketed a left-footed shot from outside of the box, and the ball drilled the left post and trickled out of harm’s way.

With just a few minutes remaining in the match, the UNCG offense started to put strikes on the ball, but none of the attempts found the net. Pickering and Clack each had multiple key sliding tackles on counter attacks that deflated the momentum from UNCG.

The Buccaneers next game is set for 7 p.m. against Mercer in Macon, Ga. The winner of the match will win the regular season crown and the number one seed into the SoCon Tournament.