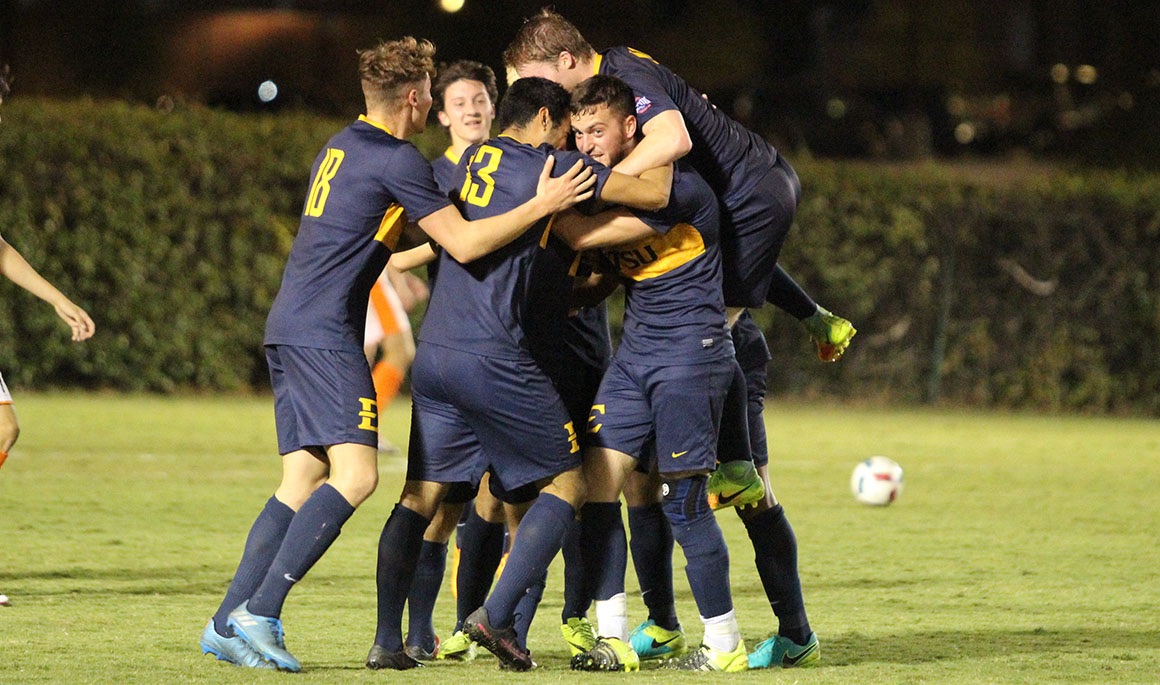 In the ninth year of the program, ETSU claimed its first-ever program regular season title, and its first SoCon crown in its existence.

With the win, the Bucs received their 11th win of the season, which is the second-most in the program. The last ETSU team that accomplished 11 or more wins, the Bucs won the Atlantic Sun Conference Tournament and advanced to their first-ever NCAA Tournament in 2010.

After claiming the title, the Bucs pick up the number one seed in the SoCon Tournament and will await the winner of the No. 4 UNCG/No. 5 Furman matchup that will take place on Nov. 5 in Greensboro, N.C.

Cameron Woodfin (Old Hickory, Tenn.) tallied two assists on the night to bring his season total to 11. The team is now 9-0 when the junior midfielder gets on the score sheet.

ETSU moves to 11-4-2 on the year and 7-1-2 in the conference. Mercer falls to 12-6 and 7-3 as the Bears concluded their regular season against the Bucs on Saturday.

Mercer stuck with its game plan by striking early in the match and did so in the 3rd minute. Ian Antley netted the first goal of the game to give Mercer the early 1-0 advantage.

Joe Pickering (East Sussex, England) tried to knot the game up in the 8th minute. He went up for a header off a cross from Yera Sissoko (Troyes, France), but the attempt went just above the cross bar.

ETSU had another chance in the 17th minute when Ben Holt (Knoxville, Tenn.) ripped a shot from outside of the penalty area. The line drive attempt forced the Mercer goalkeeper to make a diving save to his right to keep Mercer ahead, 1-0.

Mitchell Cecatiello (Pascagoula, Miss.) gave ETSU a chance to tie the game in the 28th minute, but his screaming shot dilled the left post and deflected out of harm’s way.

ETSU finally capitalized in the 32nd minute when Fletcher Ekern (Knoxville, Tenn.) scored his ninth goal of the year. Woodfin worked his way into the left side of the box. He took a shot with the Mercer keeper closing. Woodfin’s initial shot was deflected off the goalie, but Ekern found the rebound and knocked it into the middle of the net to tie the game 1-1.

The Bucs and Bears went into the half tied 1-1. Mercer was outshooting ETSU 9-5 with 5-3 on goal, and Jonny Sutherland (Chester, U.K.) recorded four saves in the first 45 minutes.

Again sticking their game plan, the Bears struck early coming out of the half. Just coming off a SoCon Player of the Week performance, Jordan Duru scored the second go-ahead goal for Mercer six minutes out of the half. The Bears scored off a set piece to net his fourth goal of the season.

For the next 20 minutes, both Mercer and ETSU were committing turnovers as neither team maintained possession during that stretch.

Will Bagrou of Mercer nearly put the game away in the 73rd minute, but coming off the bench to replace Sutherland, Daniel Adelman (Johnson City, Tenn.) forced Bagrou to take a shot that sailed over the ETSU crossbar on a breakaway. The Johnson City native closed on Bagrou, who was running full speed in a one-on-one situation, and Adelman forced Bagrou to shoot sooner than he wanted and caused the attempt to go high.

In a turn of events, the Blue and Gold netted its second game-tying goal of the game in the 77th minute. Mercer maintained possession in its defensive half and turned the ball over. Woodfin dished a pass to find the foot of Ramalho who netted his first goal of the game and tied the game at 2-2.

With just two minutes left in regulation, the Bucs were attacking hard and gave the team multiple chances on goal. The Bucs were able to capitalize as Ramalho drilled the top-right hand corner of the Mercer net.

After corralling a turnover by Mercer, Holt dribbled up the left side of the pitch and into the attacking third for the Bucs. After knocking a pass to his left to Javier Alberto (Johnson City, Tenn.), Alberto immediately touched the ball to his right to Ramalho. Ramalho dribbled around a Mercer defender and took a right-footed shot that curled into the top-right corner of the Mercer goal. With the goal, the Bucs took their first lead of the game, 3-2.

With just a few minutes remaining, ETSU was able to kill the clock and claim its first-ever regular season title.

Now with the number one seed in the SoCon Tournament, the Bucs await the winner of the No. 4 UNCG/No. 5 Furman match that takes place on Saturday, Nov. 5. The Bucs will play their next match in Greensboro, N.C. in the semifinals at 3:30 p.m. on Thursday, Nov. 10.