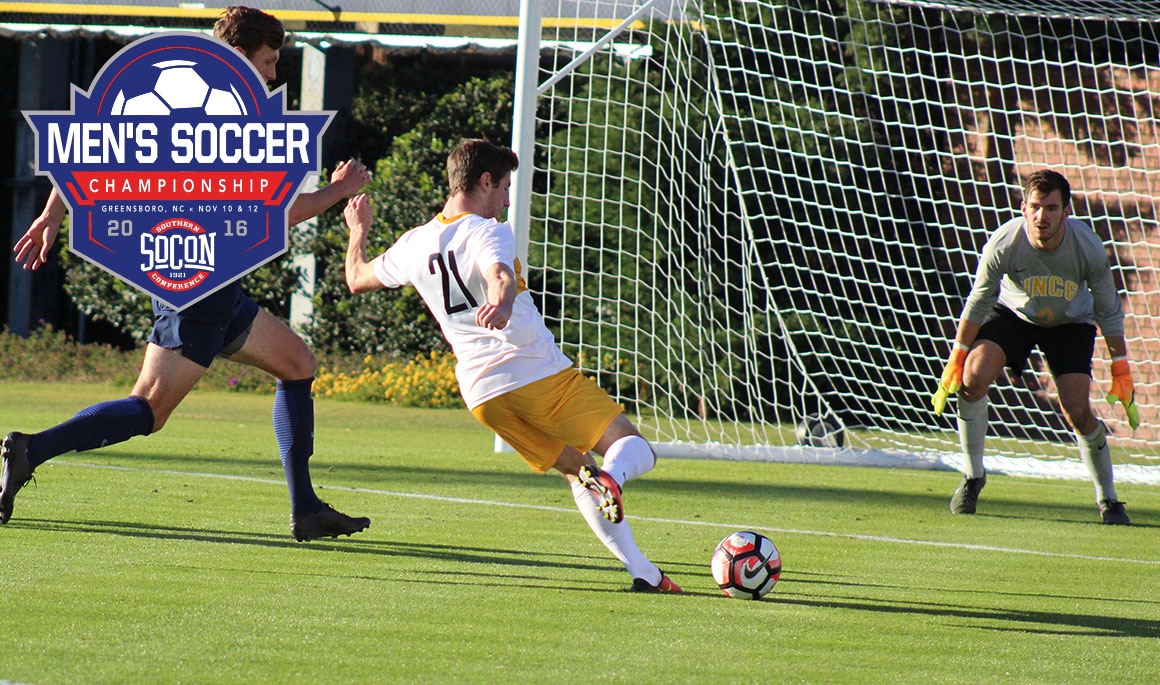 ETSU to play winner of No .2 Mercer/No. 3 Wofford in SoCon Championship

GREENSBORO, N.C. (Nov. 10, 2016) – For the second straight year, ETSU men's soccer upended UNCG in the SoCon Tournament Semifinals in 5-2 fashion as five different Buccaneers found the back of the net to advance to the SoCon Championship on Saturday, Nov. 12 at 5 p.m.

The biggest aspect of the match was defensive miscues and both teams took advantage of the opportunities. The first miscue was taken advantage by ETSU when Ramalho scored his fifth goal of the year. He worked right up the middle of the UNCG defensive half. Fletcher Ekern (Knoxville, Tenn.) flicked a ball to his left to Ramalho who rocketed the ball past the UNCG keeper to take the 1-0 lead in the 4th minute.

Given another opportunity in the 13th minute, Cecatiello took advantage by scoring his first goal of the season. The UNCG goalkeeper tried to kick the ball downfield but miss-hit the ball and fell to the feet of Cecatiello about 30 yards out from the UNCG goal. In a three-on-three scenario, Cecatiello worked his way into the penalty box on the right side and struck the ball under a diving Spartan goalkeeper. The goal pulled the Bucs to a 2-0 lead.

Going into halftime, the Bucs found themselves up 2-0, but the Spartans had a narrow advantage in shots in the first 45 minutes.

Just like they did to start the game, the Bucs scored two goals early. This time ETSU netted a pair of goals within the first 11 minutes of the second half.

Serge Gomis (Dakar, Senegal) scored his third goal of the season to take the 3-0 advantage in the 49th minute. Ramalho worked off another counter and worked past the UNCG left-back. After working into the attacking third, Ramalho dished a pass that ultimately found Gomis. Gomis put a foot on the ball and found the right place as it rolled into the bottom left-hand corner of the goal.

Redshirt freshman Javier Alberto (Johnson City, Tenn.) joined in on the scoring as he netted his third goal of the year. He snuck behind the UNCG backline and was fed a through pass into the UNCG penalty box. With the Spartan keeper approaching, Alberto snuck the shot past the sliding keeper to take the commanding 4-0 lead in the 56th minute.

Just six minutes later, UNCG scored off an ETSU defensive miscue that led to a Spartan penalty kick. Eric Gunnarsson took the kick and drilled the ball into the right side of the net to pull the game to 4-1.

The Bucs padded their lead in the 71st minute when Woodfin found the scoresheet for a second time in a match. Woodfin went streaking down the right side of the pitch and outhustled the UNCG defense. In a one-on-one situation with the UNCG keeper, Woodfin snuck a beautiful goal that just found the left side of the net. It was his third point of the match as he earned the assist on Gomis’ goal in the 49th minute.

The Spartans tried to comeback from four goals, but they were only able to net one goal in the 85th minute as Ethan Wells made the game 5-2.