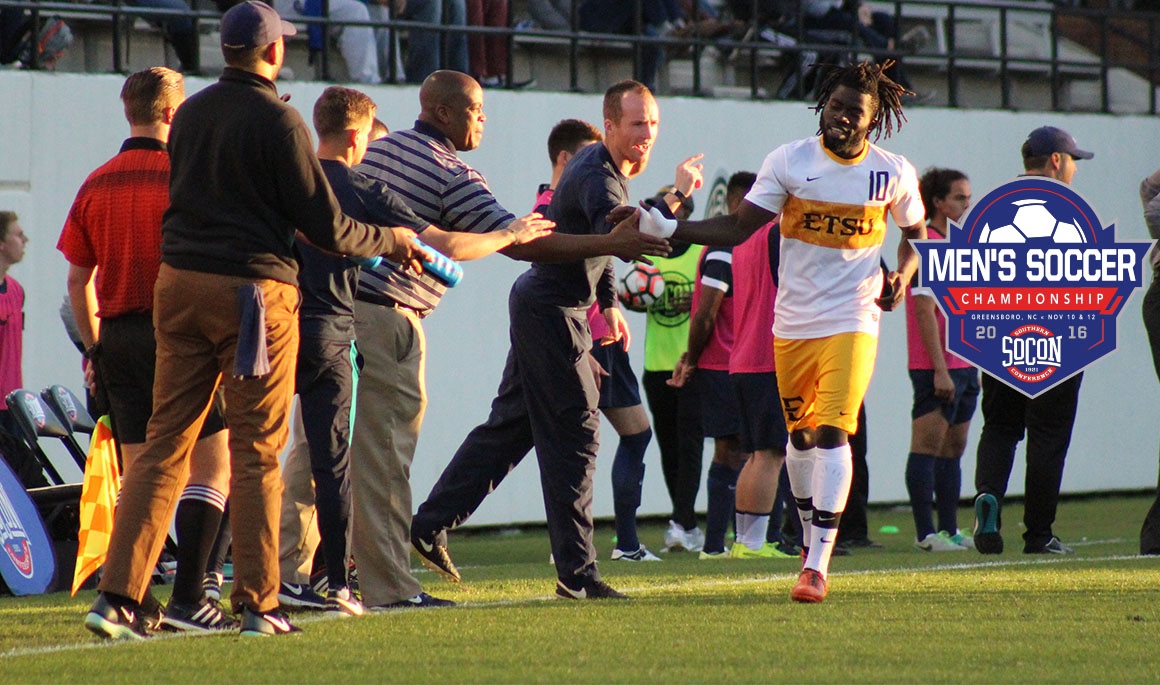 GREENSBORO, N.C. (Nov. 11, 2016) – For the second straight season, the ETSU men’s soccer team is preparing for the Southern Conference Championship set for Nov. 12 at 5 p.m. in hopes to claim its first-ever SoCon Tournament Title.

The Bucs will square off against Mercer on Saturday in Greensboro, N.C. This is the third time the Bucs and Bears have squared off this season. ETSU swept the regular season and looks to go for the trifecta in the SoCon Championship.

This is the third occurrence this season ETSU has played the same team twice in a span of three games. VMI and UNCG were the other two teams, and the Bucs are a perfect 4-0 in such games.

This is the second straight season for the Bucs to make an appearance in the SoCon Championship. In his third year at the helm, head coach Bo Oshoniyi has led the Blue and Gold to championship appearances twice.

Now winners of seven of the last eight matches, the Bucs are looking to finish the season 3-0 against the No. 2 seeded Mercer Bears at UNCG Soccer Stadium. In the first matchup this season in Johnson City, ETSU was being dominated in the first half as the Bears out-shot the Bucs 14-3. However, the Bucs rebounded in the second half and had ample opportunities to score. Junior midfielder Cameron Woodfin (Old Hickory, Tenn.) and junior midfielder Serge Gomis (Dakar, Senega) each netted a goal with both coming in the final 10 minutes of the game.

In the second head-to-head match of the season, Mercer struck early as it scored a goal in the 3rd minute. ETSU was able to knot the game before going into the half as junior forward Fletcher Ekern (Knoxville, Tenn.) tapped in a rebound off the goalkeeper. The hero of the match was Joao Ramalho (Monte Santo, Brazil) as he scored the second game-tying goal in the 77th minute and netted the game-winning goal with just two minutes remaining in regulation.

To open the Southern Conference Tournament, ETSU’s offense shined as five different players scored a goal. It was the first time in program history to net five goals by five different players. The closest the Bucs came to capturing that feat was last year in their first game of the SoCon Tournament. ETSU downed Wofford 5-0, but only four players recorded all five goals.

The Bears rebounded after losing to ETSU in the regular season finale in the SoCon Semifinals. Mercer opened its 2016 SoCon Tournament with a dominating 2-0 win over Wofford. Kobe Perez netted both goals against the Terriers with one goal coming in each half. The first goal for Perez came off a header on a corner, and his second shot was chipped over the Wofford goalkeeper, who was out of position.

The biggest threat for the Bear is Will Bagrou. The 2016 SoCon Player of the Year took two shots with one on frame against Wofford in the tournament semifinal. During the regular season, he finished tied for second in points (20) and tied for third in goals (8) in the SoCon. He has recorded 63 career points, which is the most for active players in the conference.

Alongside Bagrou, Mercer placed six other players on the First, Second and Freshman All-Conference Teams. Among those were midfielder Jordan Duru and twin brothers Ian and Conner Antley, who earned First Team honors. Redshirt senior goalkeeper Jeremy Booth was placed on the Second Team, and Roberto Arteaga and Jacob Chadwell earned All-Freshman honors.