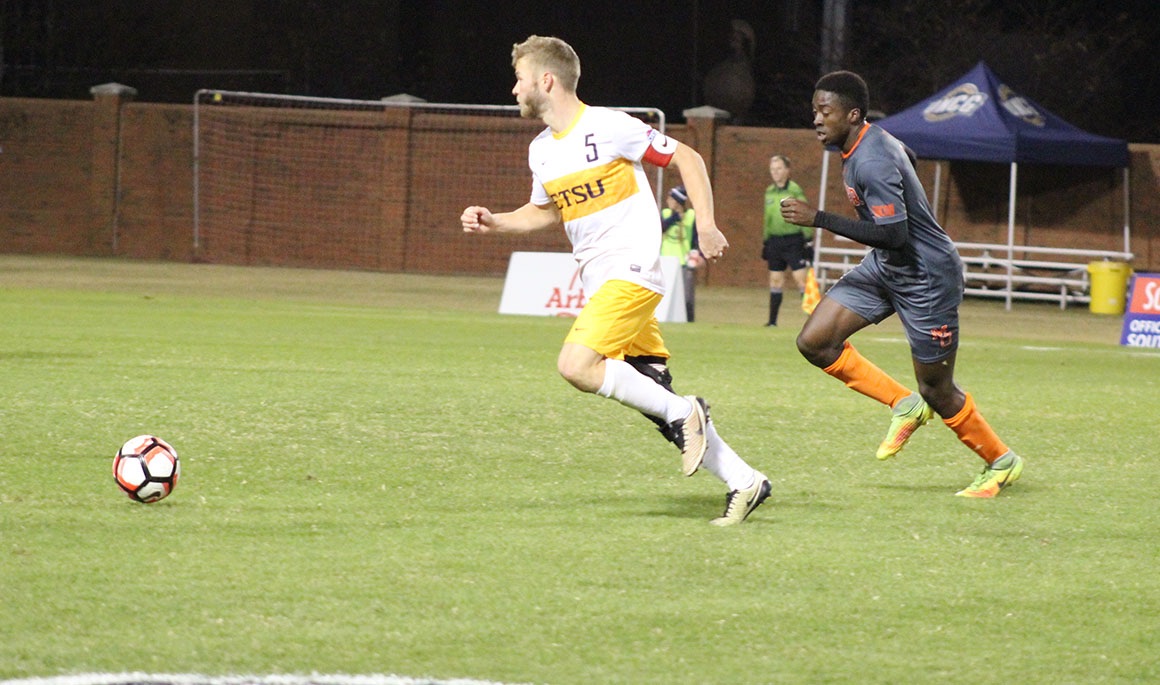 GREENSBORO, N.C. (Nov. 12, 2016) – The ETSU men’s soccer team fell on Saturday in penalty kicks, 4-1, to Mercer as the Bucs and Bears played to a scoreless tie in Greensboro, N.C. in the SoCon Tournament Championship.

The first half went slow as neither team was able to get a good chance at goal. In the 13th minute, ETSU had an opportunity as sophomore goalkeeper Jonny Sutherland (Chester, U.K.) knocked a pass downfield to Joao Ramalho (Monte Santo, Brazil). Ramalho tried to corral the long pass, but he was boxed out by the leftback as the ball trickled over the end line.

A similar chance occurred as Sutherland pinged a pass down the line. However, this time Ramalho corralled the loose ball and tried to put a cross into the box. His pass went low but was intercepted by the Mercer backline.

Going into halftime, ETSU was held without a shot, and Mercer was only able to get a pair of shots off.

The Blue and Gold tried to threaten early as they were awarded their first corner of the match in the 47th minute. The pass went into the box, but Mercer cleared the ball out of harm’s way.

In the 68th minute, Ramalho had one of the best looks for the Bucs as he unleashed a shot from the 18-yard line. He forced the Mercer keeper to dive to his left, but Jeremy Booth put a hand on the ball to save the shot.

Both teams were playing back-and-forth until the end, but neither team was able to find the back of the net in full time. ETSU threatened with under a minute remaining in regulation. The Bucs took two corners and attempted a pair of shots with seconds remaining, but none of the attempts found the net.

Going into their seventh overtime match of the season, ETSU held the Bears scoreless in the first overtime period.

The Bears had a golden chance in the second overtime in the 102nd minute. Will Bagrou worked through a pair of ETSU defenders and forced a one-on-one matchup with Sutherland. Bagrou ripped a shot towards the right side, but Sutherland made an unbelievable diving save to his left to deny the golden goal.

After playing for the next eight minutes, the Bucs and Bears ended in a 0-0 tie.

However, there had to be a team to take home to SoCon Tournament trophy, so both ETSU and Mercer squared off in a penalty shootout.

Both teams made its first penalty shot. However, the Bears made their next three penalty kicks whereas ETSU had its second shot saved and the final attempt hitting the crossbar.

With the 4-1 win in penalty kicks, Mercer claimed the automatic bid to the NCAA Men’s Soccer Tournament.