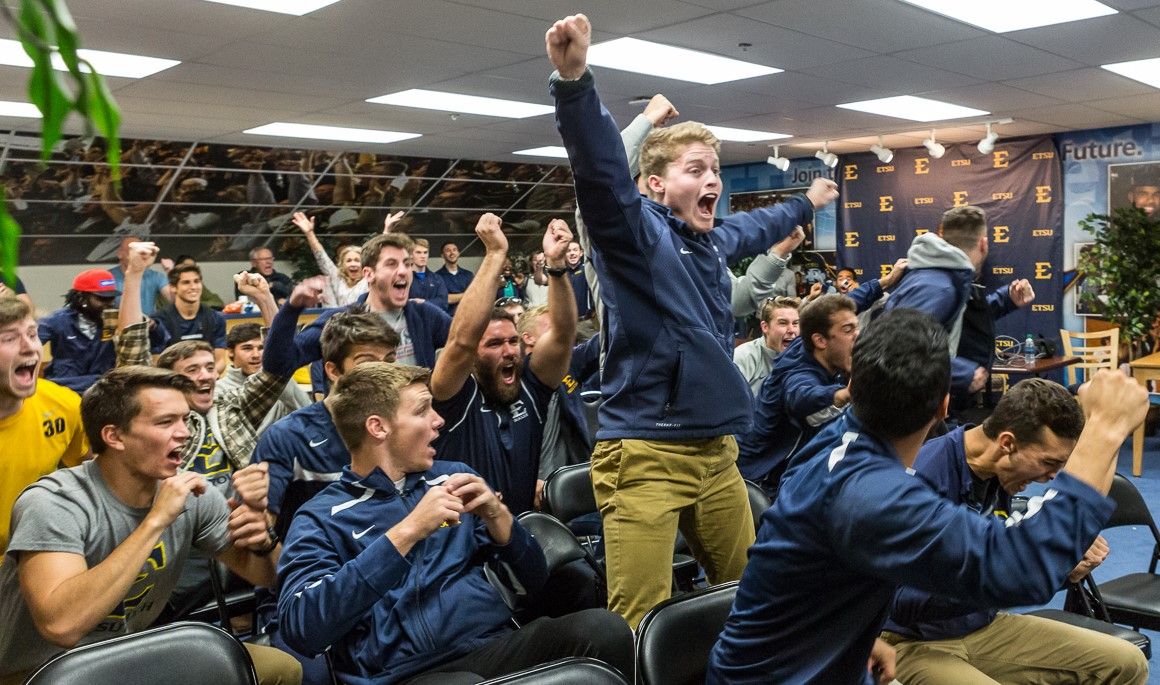 JOHNSON CITY, Tenn. (Nov. 14, 2016) – Eagerly awaiting to see if they received an at-large bid to the NCAA Tournament, the Bucs learned their postseason fate on Monday.

With players and staff members packed in the Ward Room inside the MSHA Athletic Center, the room erupted with celebration as ETSU saw its name appear on the NCAA selection show. The Bucs will see a familiar foe as ETSU heads to Blacksburg to face Virginia Tech on Thursday, Nov. 17. Game time for the first round matchup is set for 6 p.m. at Thompson Field.

The winner of ETSU-Virginia Tech will travel to take on 10th-seeded Charlotte on Sunday, Nov. 20.

The NCAA Tournament field features 48 teams – 24 of which are at-large teams.

“It’s huge to receive an at-large bid. Not only for our team but also for the program and the university. It’s the first time in soccer’s history, and it has been a long time in the university’s side as well. I think it’s something the boys can be proud of. It is tough for mid-majors and small schools to get an at-large bid, so the fact the guys were able to get that this season is huge,” said head coach Bo Oshoniyi.

ETSU has been to the NCAA Tournament twice in program history, the most recent time coming in 2013 when the Bucs won the Atlantic Sun Conference Tournament. However, this marks the first time in program history the Bucs have received an at-large bid after falling in penalty kicks to Mercer in the SoCon Championship on Saturday in Greensboro, N.C.

ETSU has squared off against Virginia Tech three times in the last two seasons - all of which were spring or preseason matches. The last time the Bucs faced the Hokies during the regular season came in 2011 when ETSU won 1-0 at Summers-Taylor Stadium.

“This is going to be a fun matchup. It is a common opponent for us because we play them every preseason and every spring, so we know each other quite well. We went up there several times where we have won some and they have also won some. I think, overall, it be great matchup of two teams that are very familiar with each other. We are excited to get up there and get a win,” Oshoniyi said.

In a season where ETSU has rewritten a lot of records, the Bucs’ resume was strong enough to receive an at-large bid to the NCAA Tournament. ETSU’s highlights this season include: defeating then-No. 1 North Carolina on the road, winning their first-ever regular season title, taking three ranked teams into overtime, never dropping out of the top-50 in RPI, and also going undefeated in the last nine games (7-0-2). The Bucs currently sit at 12-4-3, which is the second-most wins in program history.