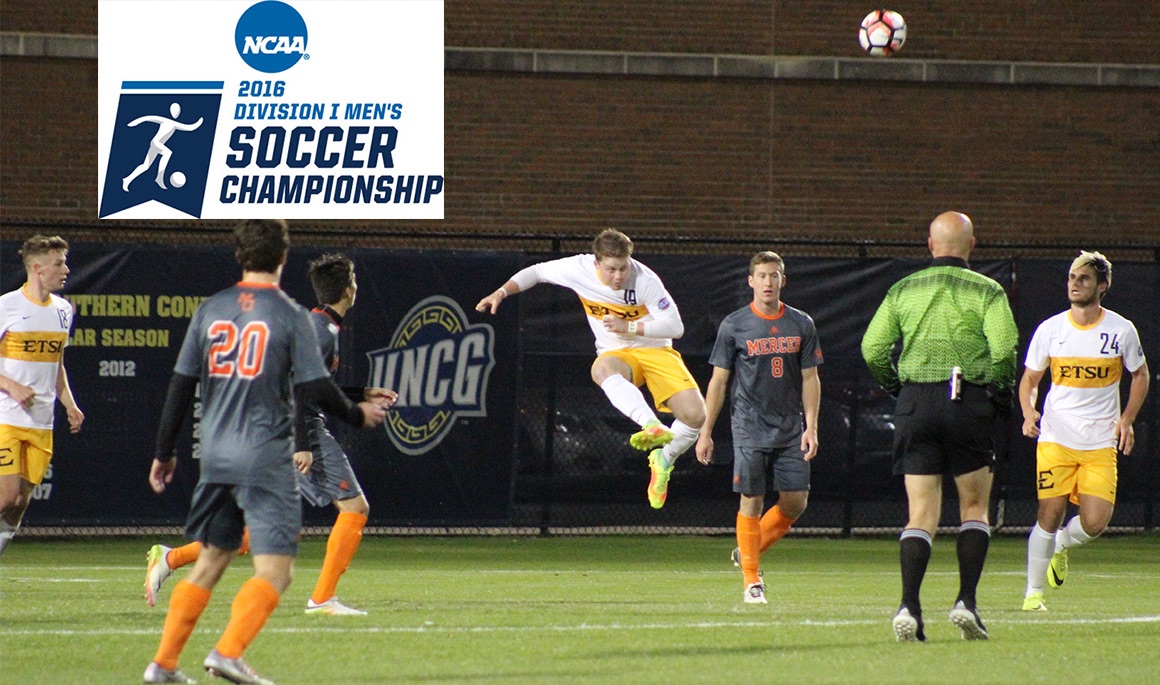 JOHNSON CITY, Tenn. (Nov. 16, 2016) – In a season where the record books have been rewritten, the ETSU men’s soccer team looks to capitalize on being named an at-large bid to the NCAA Tournament.

The Bucs will open their NCAA play on Thursday, Nov. 17 with Virginia Tech at Thompson Field. Kickoff for the opening round is set for 6 p.m. in Blacksburg, Va.

The Blue and Gold received one of the 24 at-large bids, which is a first in program history. This is the third trip to the NCAA Tournament in ETSU history. The Bucs earned two bids in 2010 and 2013 by winning the Atlantic Sun Conference Tournament, but both Buccaneer squads fell in the first round.

In just his third year at the helm, ETSU head coach Bo Oshoniyi earned his first postseason appearance as the Bucs currently sit 12-4-3 overall this season.

Scoring was key for the Bucs in the Southern Conference Tournament. They averaged 2.5 goals per game while allowing one goal per game. In the semifinals against UNCG, ETSU’s offense exploded as five different Buccaneers netted a goal as the team advanced to the SoCon Championship. ETSU and Mercer faced off in the championship, and the Bears were seeking revenge as the Bucs took away the SoCon Regular Season crown in Macon, Ga. to end the season. Neither team was able to score in regulation nor in two, ten-minute overtime periods, so the teams went to a penalty shootout. Mercer advanced as it outlasted ETSU 4-1 in penalty kicks and claimed the conference automatic bid.

In the nine game unbeaten stretch, the defense has been the backbone to the Buccaneer squad. Led by sophomore goalkeeper Jonny Sutherland (Chester, U.K.), ETSU pitched four shutouts in that stretch while accumulating nine shutouts this season – the second-most in a season in program history. Chase Clack (Memphis, Tenn.) and Joe Pickering (East Sussex, England) have also been the anchors to the central defense as both players have contributed to the 0.95 goals against average for ETSU this season. Ben Holt (Knoxville, Tenn.), Yera Sissoko (Troyes, France), and Warren Austin (Kingsport, Tenn.) have also been integral keys to the defensive success as outside backs.

This year, ETSU is out-scoring (33-19) and out-shooting (242-224) opponents. Leading the surge is junior forward Fletcher Ekern (Knoxville, Tenn.). He leads the Bucs with nine goals and 20 points this year. Since joining ETSU in 2014, the Knoxville native has recorded 20 goals, five assists and 45 career points as a Buccaneer. The Bucs also have six players that have scored at least three goals this season. Three of those have netted at least five goals: Ekern, Joao Ramalho (Monte Santo, Brazil), and Cameron Woodfin (Old Hickory, Tenn.). Ramalho is finishing his career at ETSU as he has recorded 21 goals, 11 assists and 53 career points at ETSU. Woodfin currently sits tied for first in NCAA Division I soccer with 12 assists – which is also a program-high at ETSU.

Virginia Tech is 10-4-4 on the season and 3-4-1 in Atlantic Coast Conference. For most of the season, the Hokies were ranked with their highest ranking being 15th. Virginia Tech has played eight ranked teams in the country, and ETSU has played three this year.

In the last six games, the Hokies are 1-2-3 including tying Boston College in the ACC Tournament but ultimately falling 4-3 in penalty kicks.

Even with the most potent offensives in the country, Virginia Tech is headlined by its defense. The backbone of the Hokie defense is junior goalkeeper Ben Lundgaard. He is ranked 34th nationally in save percentage (.802) and 45th in goals against average (0.87). He and the Hokie defense have limited opponents to 11.2 shots per game and just a .079 shot percentage.

Offensively, Marcelo Acuna is the biggest threat for the Hokies. He leads the team in goals (9), points (20), shots (81), shots on goal (35), game-winning goals (5), and tied for second in assists (2). Aside from Acuna, Alessandro Mion is another offensive threat as he has recorded four goals and is second on the team in points with nine. Two of the four goals for Mion were scored in the first round of the ACC Tournament.

Fans that are planning on attending the game in Blacksburg, tickets will be sold at Thompson Field. Adults will be $10, and students with a valid school ID will be $5.

Students interested in attending the game have the opportunity to ride on a student bus. The bus is set to leave ETSU's campus Thursday, Nov. 17 at 2:30 p.m. and will return to Johnson City approximately at 11:30 p.m. To reserve your seat, email [email protected] with the student name and mobile phone number or go by the SORC Suite A office in person to sign up. The cost of transpotation and ticket to the game will only cost students $5.