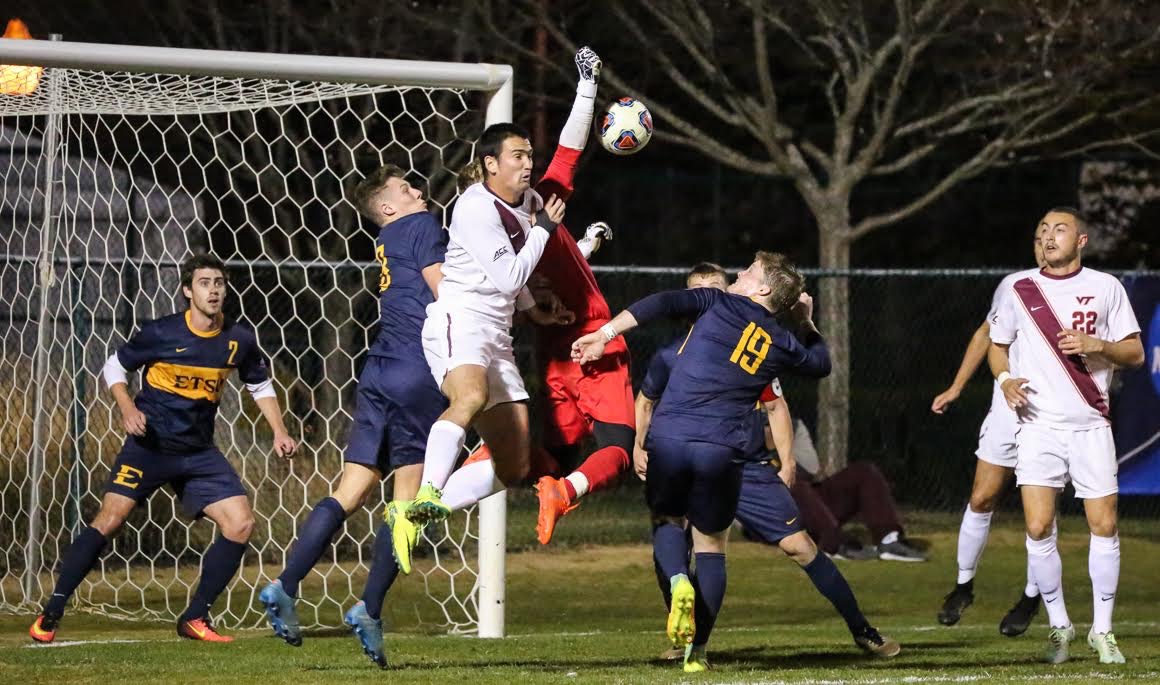 BLACKSBURG, Va. (Nov. 17, 2016) – In a tale of two halves, the ETSU men's soccer team dominated the second half, but the Bucs fell 1-0 to Virginia Tech in the first round of the NCAA Tournament on Thursday night in Blacksburg, Va.

ETSU finishes its historic season at 12-5-3. In a season of firsts, the Bucs were able to claim its first-ever regular season title, defeat then-No. 1 North Carolina, receive the first-ever at-large bid to the NCAA Tournament and many more accomplishments.

From first touch, both ETSU and Virginia Tech had a few looks at goal. Neither team was able to capitalize, but the Hokies gained all the momentum after the 6th minute.

In the 20th minute, the Hokies worked up the right side and into the attacking third. After flicking a pass forward and into the right side of the ETSU box, a Hokie took a shot on goal. However, sophomore goalkeeper Jonny Sutherland (Chester, U.K.) made a dive to his right to keep the game level.

Just eight minutes later, Virginia Tech was awarded a corner kick after the Blue and Gold defended a strong Virginia Tech attack. From the right corner flag, the Hokies curled a ball to the back post. As a sub, Nico Quashie came into the box, unmarked, and put a head on the ball and knocked it into the left side of the net to take the 1-0 advantage.

At the 34th minute, the Bucs were awarded a free kick in their attacking half after Virginia Tech was called for the foul. ETSU was able to put two shots toward the Virginia Tech net, but neither found the net.

Another chance occurred for ETSU in the 43rd minute as junior forward Fletcher Ekern (Knoxville, Tenn.) knocked a line drive pass to Charles Blankenship (Memphis, Tenn.), who came off the bench just several minutes before. Blankenship tried to beat the Virginia Tech goalkeeper to the ball, but the Hokie keeper covered it up before the Memphis native could put a foot on it.

Going into the half, ETSU was down 1-0 and was being out-shot 8-2. Not getting as much pressure as the Bucs would like, ETSU went into the locker room and changed strategies by putting two strikers up top. The small change worked for the Blue and Gold as it was able to rifle off eight shots in the second half with two on goal.

A chance came early in the second stanza for ETSU as it was awarded its first corner of the match. Joao Ramalho (Monte Santo, Brazil) took the set piece opportunity and laid it into the box. Mitchell Cecatiello (Pascagoula, Miss.) put a head on the ball, but the attempt went right of frame.

In the 62nd minute, the Bucs worked off a counter attack. Cecatiello took control of the ball and tried to fling the ball down field to Javier Alberto (Johnson City, Tenn.). A Hokie defender jumped the pass and intercepted the ball to end the threat.

In a span of seven minutes, ETSU fired off four shots including one on frame by Alberto.

For the final 15 minutes, Virginia Tech was able to maintain most of the possession and fend off the Buccaneer attack in the final minutes.

With the 1-0 win, Virginia Tech goes on to the second round and will travel to UNC Charlotte on Sunday, Nov. 20.