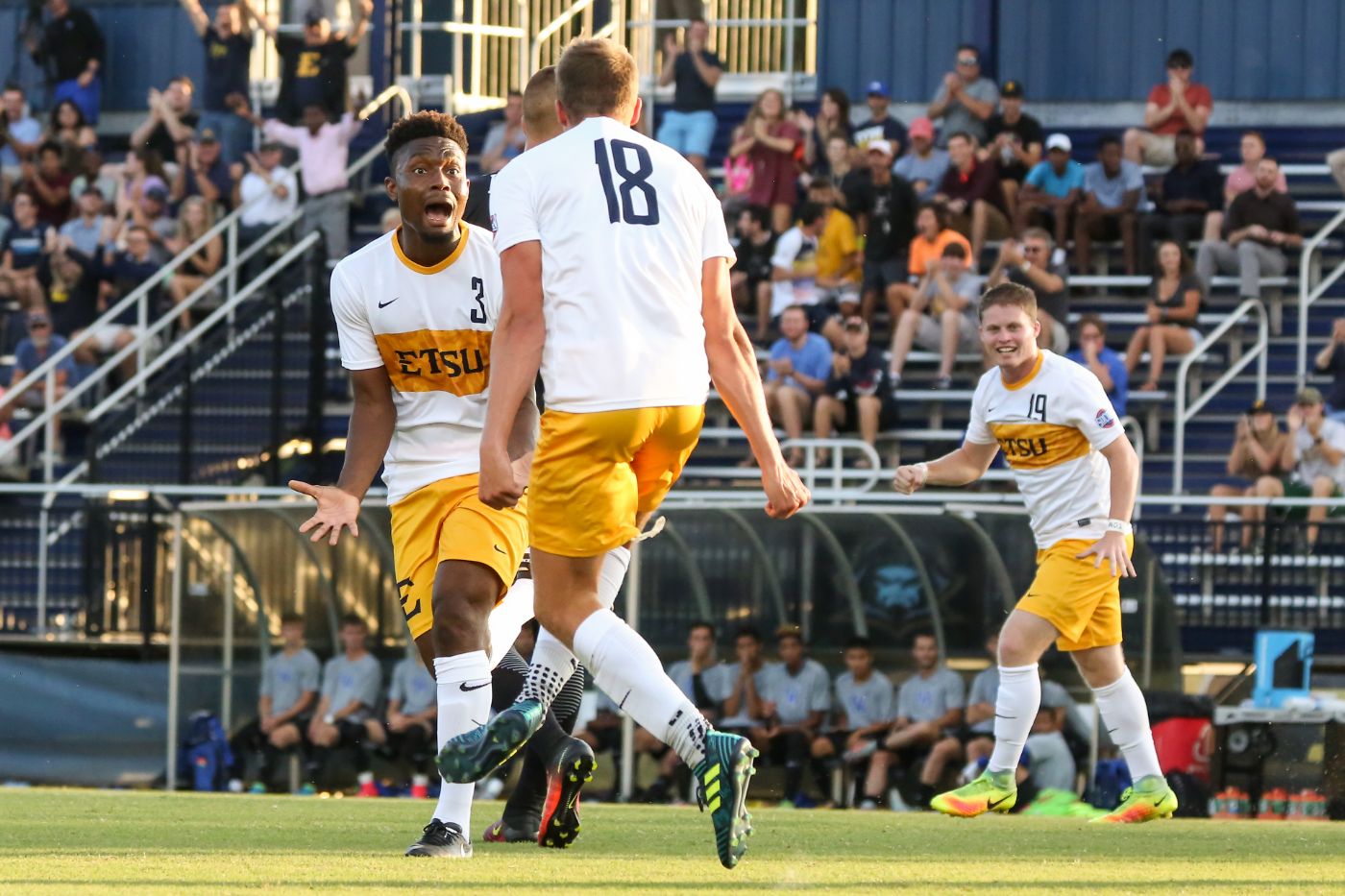 JOHNSON CITY, Tenn. (Sept. 8, 2017) – After picking up its first win of the season against Lipscomb Tuesday, the ETSU men’s soccer team hits the road to face Appalachian State Saturday, Sept. 9 at 7 p.m. at the Ted Mackorell Soccer Complex.

The Bucs (1-1-1) have tested their endurance in the first three games of the 2017 season, going to overtime in each contest. After leaving the first two games empty handed with a tie and a loss, ETSU broke through and earned a 3-2 golden goal victory just two minutes into extra time.

The game-winner came courtesy of freshman midfielder Ryan Madondo (Franklin, Tenn.), who tickled the twine after receiving a deep pass from senior defender Chase Clack (Memphis, Tenn.) and driving from outside the right side of the box toward the right post. His shot hit the left corner of the net, giving ETSU a hard fought win after a two-hour rain delay in Johnson City.

The scoring started in the 23rd minute with an ETSU goal by senior forward Fletcher Ekern (Knoxville, Tenn.), who took a quick shot near the left post after receiving a pass from sophomore forward Bruno Andrade (Sao Paulo, Brazil). Ekern, who has 21 career goals, is now five goals away from tying the school career record for goals set by David Geno in 2013 (26).

Lipscomb went to halftime trailing, but would storm back with two goals early in the half to take a 2-1 lead. ETSU answered six minutes later after a shot by junior midfielder Nick Spielman (Melbourne, Fla.) was deflected off the goalkeeper into the friendly foot of Clack. Clack walked into the net for the equalizer, which would hold until the end of regulation.

The Mountaineers will end a three-game home stand Saturday, as it previously hosted contests against Central Arkansas (2-1 win) and LIU-Brooklyn (1-1 tie). Appalachian is 2-1-1 on the season and finished 2016 with a 5-9-4 record.

The program has been in existence since 1962. Prior to joining the Sun Belt Conference in 2014, the Mountaineers spent 41 years as a member of the SoCon. They claimed one SoCon tournament championship in 1990 and 13 regular season championships while in the conference, including a stretch of six consecutive titles from 1977-82.

Approximately one hour and 22 minutes separate these two schools, as Appalachian State is located in Boone, N.C. Sixteen of the 28 roster members are North Carolina natives.

The team is led by Jason O’Keefe, who is in his second season at the helm. Appalachian State is O’Keefe’s first head coaching stop, where he is now 7-10-5 overall.

Appalachian State, much like ETSU, has a good mix of experienced veterans to compliment a large freshman class. The Mountaineers returned nine starters – four seniors and five juniors – while adding 14 newcomers to the program – 12 freshmen and two transfers.

One freshman that has already impacted the team is forward Juan Hernandez. He leads the team with two goals, both of which came in a 2-1 victory against Central Arkansas. He has five shot attempts with three shots on target for a .600 SOG percentage.

A key returner for the Mountaineers is Daniel Avila, who appeared in 17 of 18 games last season and scored one goal with two assists. Avila has already tied last season’s assist total, helping on two goals in a 3-2 victory over VCU.

The one man not donning a Black and Gold kit for Appalachian State is junior goalkeeper Jake Chasteen. Chasteen served as a backup last season and has been quite busy in his transition season, recording 18 saves on 65 total shots faced. He owns a .750 save percentage so far.

Since ETSU started its program in 2008, Appalachian State has become a regular opponent for the Bucs. Excluding 2014, the two squads have faced off once each season since 2008 in either regular season play or exhibition.

In regular season action, the Mountaineers own a 5-2 series lead. With the exception of 2008, each match has been decided by one goal.

In last year’s contest, the Bucs came away with a momentum-building 1-0 victory after a game-winning goal came courtesy of senior forward Cameron Woodfin (Old Hickory, Tenn.). The home victory snapped a four game losing skid to the Mountaineers, while Jonny Sutherland’s (Chester, U.K.) perfect game gave ETSU its first shutout over Appalachian since 2010.

As mentioned earlier, Ekern is five goals away from tying the program career goal record. Tuesday’s goal tied him for second with former teammate Joao Ramalho at 21. Ekern passed Alesi Osorio Tuesday night for fourth place on the all-time list for shots on goal with 50. The current record holder in that category is Geno with 100.

After a breakout 2016 season that saw a NCAA-high and ETSU single-season record 12 assists, Woodfin is second on the all-time career list at ETSU with 17 total assists. Woodfin needs four more assists to break the program record held by Geno (20).

Sutherland is in line to become one of the greatest keepers in ETSU history, as he came into the season with the career record for highest save percentage at .766. With 15 saves this season, Sutherland ranks second on the career saves list at 155, trailing Ryan Coulter who has 182. Sutherland also needs 11 shutouts this season to tie the program career record held by Coulter (25).