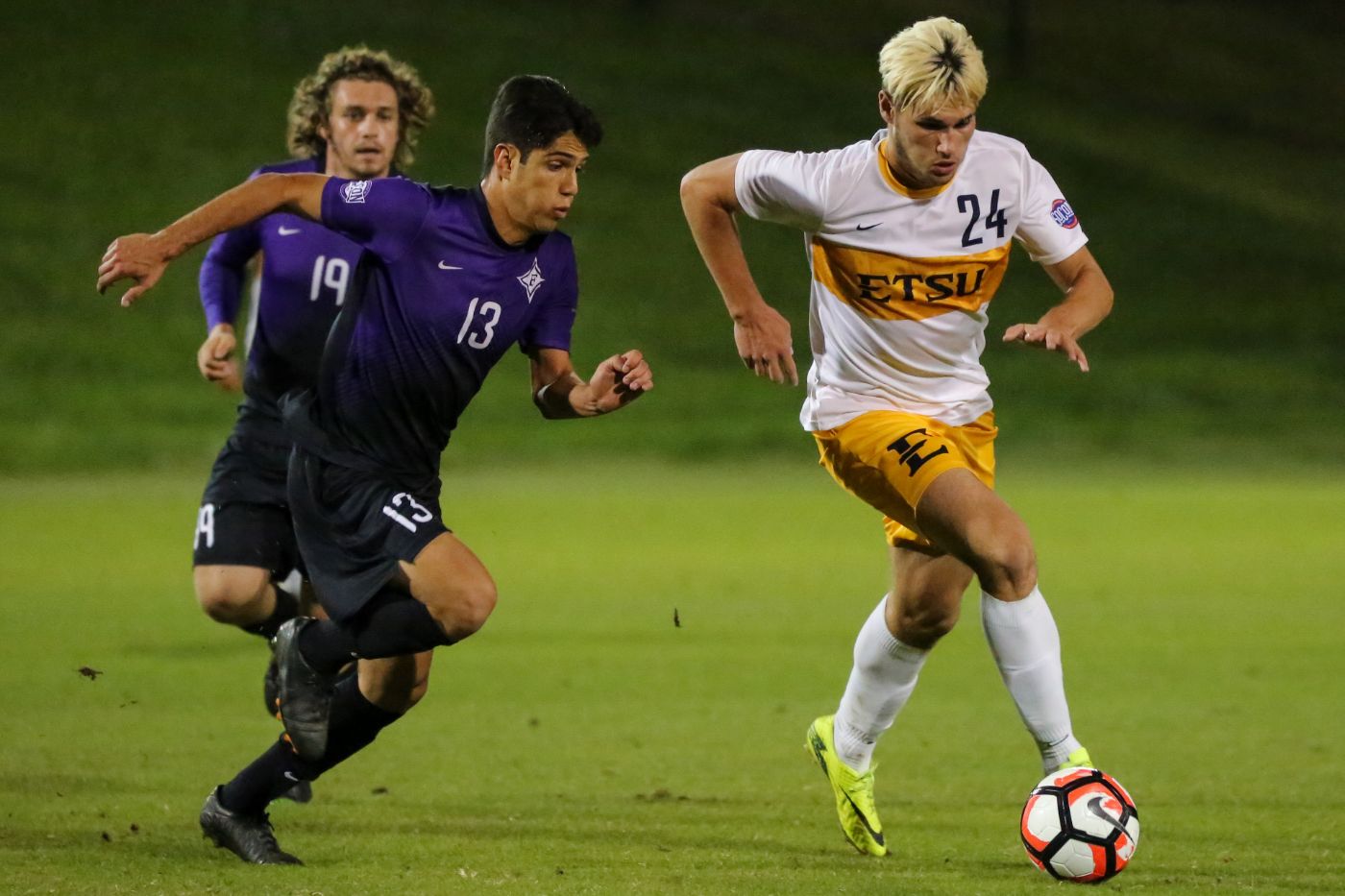 JOHNSON CITY, Tenn. (Oct. 5, 2017) – Coming off back-to-back conference road wins over Wofford and VMI, the ETSU men’s soccer team will look to defend its home turf Friday, Oct. 6 at 8 p.m. against No. 25 Furman in a contest of two top Southern Conference teams.

The Bucs are now 5-2-3 on the season and lead the conference with a 2-0-1 record. Furman fell to third in the conference standings with a 1-1-1 record after tying 0-0 with Mercer Tuesday night. The Paladins do hold the best overall record, however, at 7-3-1.

The first two goals came from players who have now scored in back-to-back games, as senior Ben Holt (Knoxville, Tenn.) broke through first before junior Nick Spielman (Melbourne, Fla.) found twine for the third time in two games with a header. The half ended with a goal from sophomore Bruno Andrade (Sao Paulo, Brazil) off a double-assist from senior Fletcher Ekern (Knoxville, Tenn.) and Gomis.

In the second half, freshman Danny Barlow (Newcastle, England) nailed a penalty kick to put the Bucs up 4-0 before senior Richmond Taylor (Hendersonville, Tenn.) capped the scoring off an assist from freshman Josh Denton (Knoxville, Tenn).

Junior goalkeeper Jonny Sutherland (Chester, U.K.) earned his fourth shutout of the season with help from a strong performance by the backline. The Bucs limited the Keydets to just one shot in the game, which missed wide.

The first four goals for ETSU were scored by a senior, junior, sophomore and then a freshman, respectively.

After opening the season with a 6-0 record, the Furman Paladins have worked their way into the Soccer America Men’s Top 25 and remain ranked No. 25 heading into tomorrow. The Paladins now stand at 7-3-1 and are 1-1-1 in conference play.

The Paladins are longtime members of the SoCon and have been established since 1967. Furman has claimed 13 conference tournament titles, including back-to-back victories in 2014-15. The program has produced many notable soccer players over the years, including USA National Team standout Clint Dempsey.

Furman is led by longtime head coach Doug Allison, who has spent 22 years with the program.

Allison ranks among the top 20 active coaches in the NCAA, coming into the season with a 267-118-48 overall record (.678). He has nine Southern Conference regular season championships and eight conference tournament wins since taking over in 1995.

Furman leads the conference in offensive production, scoring 1.82 goals per game. The Paladins also lead the SoCon with 1.55 assists per game and 5.18 points per contest. ETSU is second in each category with totals of 1.70 in scoring offense, 1.50 in assists and 4.90 in points.

The Paladins have five players who have scored multiple times this season, led by the junior duo of Laurence Wyke and Connor Hubbard who have four goals and 51 combined shots.

Coming off a hot start to the season, redshirt senior defender Kevin Edelmann is another impact player for Furman. Edelmann took home the first Southern Conference Player of the Week award this season and has three goals so far.

Furman’s other player of the week winner is goalkeeper Ben Hale, who has played in 11 games and has allowed 11 goals. The keeper has 25 saves and is coming off a shutout against a high-powered Mercer offense. Hale holds a .694 save percentage.

Furman hold the all-time advantage over ETSU with a 5-2-4 record over 11 contest.

Last season, neither team managed a goal in two attempts, as the season series ended in two 0-0 draws. In 2015, the teams faced off three times and split the regular season series before Furman knocked ETSU out of the conference tournament with a 1-0 victory.

In 10 of the 11 matchups, at least one of the two teams suffered a shutout. The only time both teams scored was in a 2012 non-conference contest, where both teams tied 1-1 in Greenville, S.C.

Ekern has 22 career goals and is four goals away from tying the program career goal record held by David Geno (26). His last score against Radford broke a tie for second place with former teammate Joao Ramalho at 21.

Sutherland is in line to become one of the greatest keepers in ETSU history, as he came into the season with the career record for highest save percentage at .766. With 29 saves this season, Sutherland ranks second on the career saves list at 169, trailing Ryan Coulter who has 182.

Sutherland also needs seven shutouts and six wins to tie the program career records held by Coulter in each category.