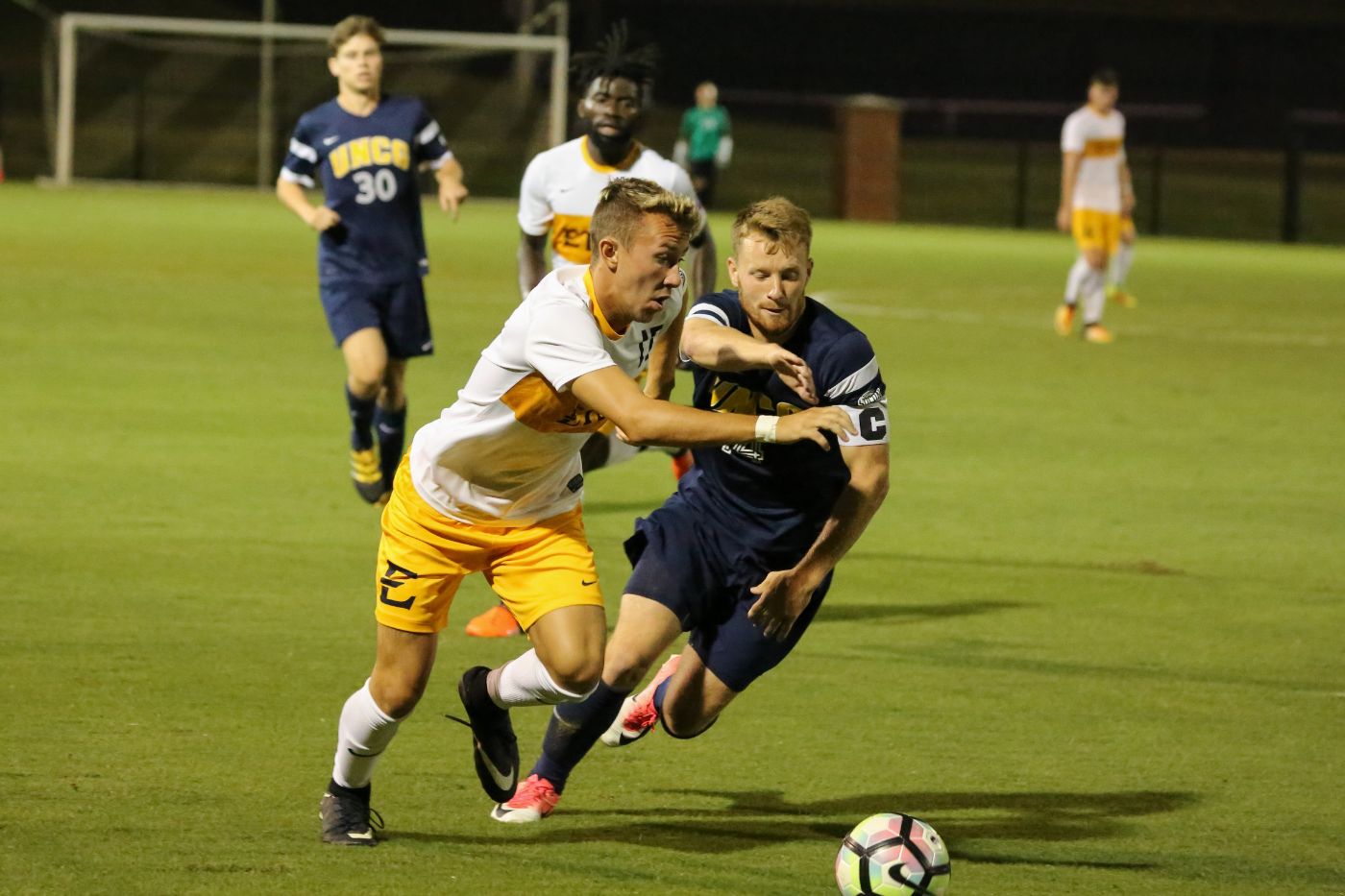 ETSU battles Spartans to start second half of conference schedule

The Bucs are the only unbeaten team through five SoCon games, as they claim nine points and second place in the standings with a 2-0-3 conference record.

Meanwhile, UNCG is on a two-game winning streak and overtook the top spot last Tuesday with a win over VMI, improving to 3-1-1. They own 10 points in SoCon action, one better than the Bucs.

For the second straight contest, the Bucs recorded a shutout but could not find the net, settling for a nil-nil tie against Mercer Tuesday. Each of ETSU’s three home conference contests this season have resulted in scoreless ties (UNCG and Furman were the others).

Coming off a 10-save performance against Furman, junior goalkeeper Jonny Sutherland (Chester, U.K.) had an opportunity to break a career program record, and did so.

The junior tallied four saves, helping him surpass Ryan Coulter’s previous record of 182 career saves. Sutherland now has 183 saves and currently has not allowed a goal in over 360 minutes.

The Spartans had the most successful first half in conference action, emerging as the frontrunner with back-to-back wins over Mercer and VMI. UNCG, who tied with ETSU Sept. 26 in Johnson City, will look to pull away in the second half and earn a regular season title.

Since last seeing ETSU, the Spartans have won three of their last four games and look to prove a point in Greensboro.

The Spartans’ men’s soccer program has been in existence since 1971 and competed on the Division III and Division II levels until jumping to Division I in 1991. UNCG is 330-186-42 all-time on the D1 level and has turned in 11-win seasons the last two years.

To add spice to the rivalry, ETSU has eliminated UNCG from the conference tournament in each of the last two seasons. Prior to those games, UNCG welcomed ETSU to the SoCon by eliminating the Bucs from the tournament back in 2014.

The team is led by head coach Justin Maullin, who is in his eighth season with UNCG. Maullin’s offense led the conference last season with 116 points and 39 goals. He’s also the first rookie coach to lead his team to a SoCon conference title, which came in 2010 after removing the “interim” title and becoming the team’s official head coach. The championship was later vacated due to previous NCAA infractions that dated back to 2007.

UNCG’s true strength comes from its defense, as the Spartans allow a conference-low 0.69 goals per game and nine total goals in 1233:14 minutes. Their team goals against average ranks 14th nationally, while ETSU trails in 32nd.

In goal for UNCG is two-time SoCon player of the week, junior Jon Milligan. Milligan has a conference-high eight shutouts this season, which ranks second in the nation. He also posts a conference high .816 save percentage.

Much like the Bucs, UNCG spreads the wealth when it comes to scoring. Nine different Spartans have found net this season, including junior forward Matt Mattis who has a team-high three goals – tying him with ETSU junior midfielder Nick Spielman (Melbourne, Fla.).

Another junior to watch is midfielder Leeroy Maguraushe, who appears to be the catalyst offensively with two goals and three assists on the season for a team-high seven points. Maguraushe was also the lone representative for UNCG on the All-SoCon preseason team.

Tomorrow marks the 14th match between the two sides all-time and the 11th since ETSU joined the Southern Conference in 2014. The Bucs hold a narrow edge in the series with a 5-4-4 record.

The last contest between the two occurred just two weeks ago in Johnson City, as both teams opened conference play with a scoreless tie.

Prior to this season, the Bucs had walked away victorious in the last four contest, including three wins last season and a tie where ETSU would edge the Spartans 6-5 in penalty kicks to advance in the 2015 SoCon tournament.

The two schools met in ETSU’s inaugural season to open the rivalry, with UNCG winning 3-1 on the road. Two later meetings in 2011 and 2012 would mark the only other non-conference matchups with ETSU as a member of the ASUN conference.

Eight of the last nine contests between the sides ended in either a tie or by a one-goal margin.

After Sutherland’s record-breaking 183rd save, the keeper now has his eyes set on a couple more records. Sutherland needs also needs five shutouts and six wins to tie the program career records held by Coulter in each category.

Senior defender Chase Clack (Memphis, Tenn.) is approaching another milestone in minutes played. The Iron Horse has 4,986 consecutive minutes of nonstop action on the pitch, dating back to the 2015 season opener.

Clack can hit 5,000 straight minutes this coming Saturday at UNCG, needing only 14 minutes to hit the mark. He would become only the second player in ETSU history to hit 5,000 career minutes (Coulter) and the first non-goalie to accomplish the feat.