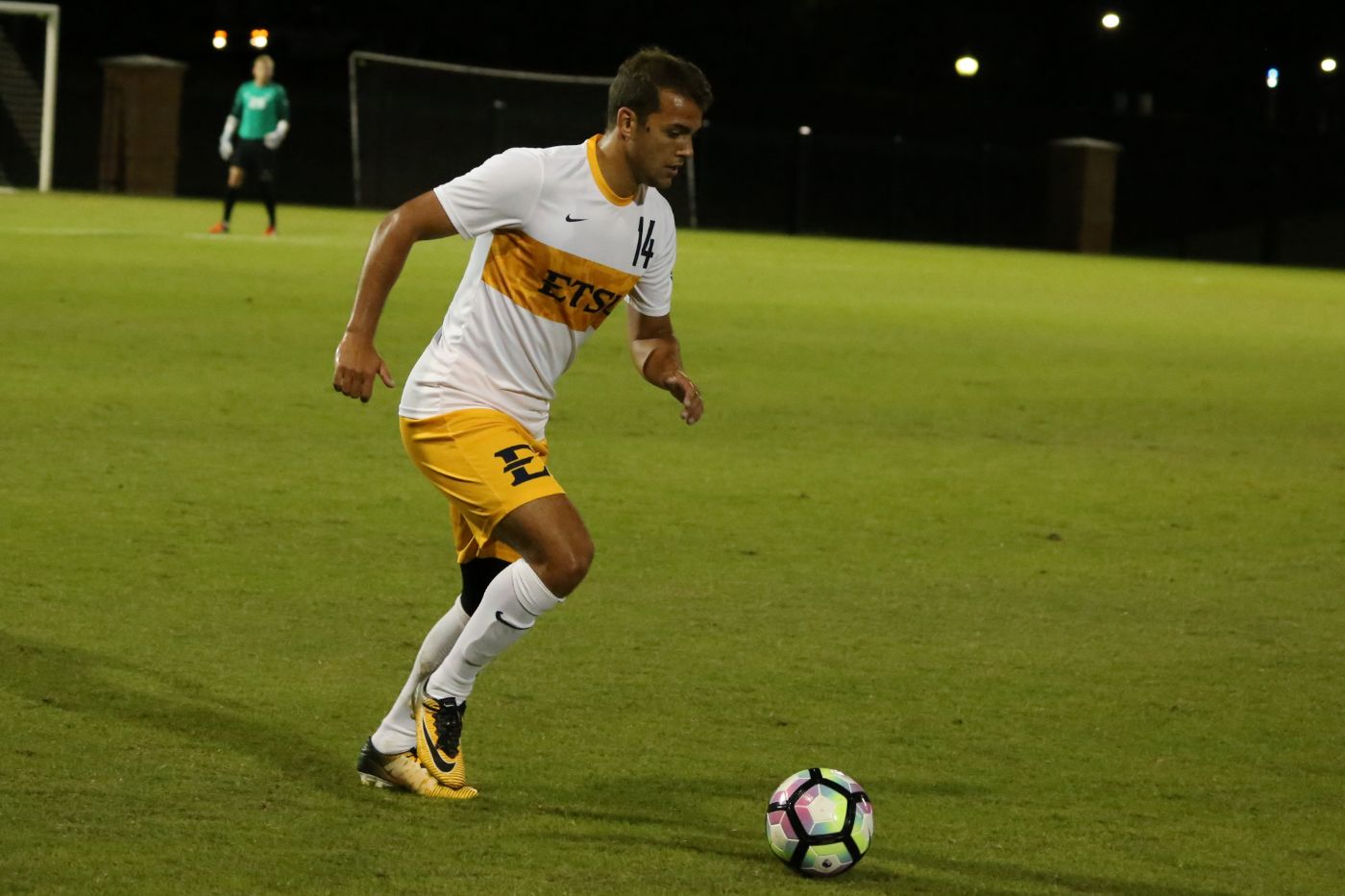 JOHNSON CITY, Tenn. (Oct. 16, 2017) – After picking up a 2-1 win in a crucial Southern Conference match at UNCG last Saturday, the ETSU men’s soccer team – who now leads the conference standings with 12 points – will host VMI Tuesday night, Oct. 14 at 7 p.m.

Heading into Saturday trailing UNCG by one point for the conference lead, the Bucs took over the top spot with the win and now has 12 points in conference play. ETSU is followed by Mercer (11), UNCG (10), Wofford (9), Furman (8) and VMI (0).

After a slow first half that totaled a combined three shots from both teams, UNCG broke through first to take a 1-0 lead early in the second half. ETSU answered quickly with an equalizer six minutes later from freshman Danny Barlow (Newcastle, England).

The deadlock would last until the 83rd minute, as senior Ben Holt (Knoxville, Tenn.) crossed just outside the box on the right side to junior Luke Parker (Memphis, Tenn.) who was standing seven yards away from the goal line. Parker volleyed the pass to the right of the keeper and into the net, giving ETSU the game-winning goal.

The Bucs outshot the Spartans 9-7 in the match, but ETSU turned in a more efficient game with six shots on goal compared to UNCG’s three. The Bucs also fought off six UNCG corner kicks, including four in the second half, to keep the Spartans at bay.

In the game, senior defender Chase Clack (Memphis, Tenn.) hit a career milestone. Clack has now played in over 5,000 consecutive minutes, now totaling 5,076 straight minutes played dating back to the 2015 season opener. Clack is the only position player to accomplish this feat.

Virginia Military Institute comes into Tuesday’s game at 0-11-2 overall and 0-6 in conference play. The Keydets are on a nine-game losing skid and have been held scoreless in the last four games.

VMI is led by head coach Michael Bonelli, who in his second season is seeking his first win in 30 attempts. Bonelli came to VMI from St. Mary’s in San Antonio, Texas, where he led his team to 16 victories over two years to give the program one of the best two-year spans in its history.

VMI averages 5.1 shots per game and 0.31 goals per game, but leads the conference with 99 saves and 7.62 saves per game. The Keydets also show their discipline with a conference-low 131 total fouls.

Two of VMI’s four goals came off the foot of senior David Wright, who toggles between midfielder and forward and leads the team with 18 shots and nine shots on goal.

The other two goals came courtesy of freshman Willson Tuck, who has appeared in 11 of 13 games with four points on four shots this season.

ETSU holds an 9-0 all-time record against VMI, with five wins in Lexington and four wins at Summers Taylor Stadium.

The Bucs have outscored VMI by a combined 29-4 in the nine contests, two of which took place in 2008 and 2009 while the others have all been in SoCon action dating back to 2014.

ETSU earned a 5-0 shutout victory in Lexington Oct. 3, as five individuals each scored in the contest. The Bucs have shutout the Keydets in six all-time contests.

After junior goalkeeper Jonny Sutherland (Chester, U.K) earned his record-breaking 183rd save, the keeper now has his eyes set on a couple more records. Sutherland now needs five shutouts and five wins to tie the program career records held by Coulter in each category.

As mentioned above, Clack has now played in 5,076 straight minutes, becoming only the second player in ETSU history to hit 5,000 career minutes (Coulter) and the first non-goalie to accomplish the feat. Coulter has 5,855 straight minutes, meaning Clack would need to log 780 minutes to break the cumulative record.