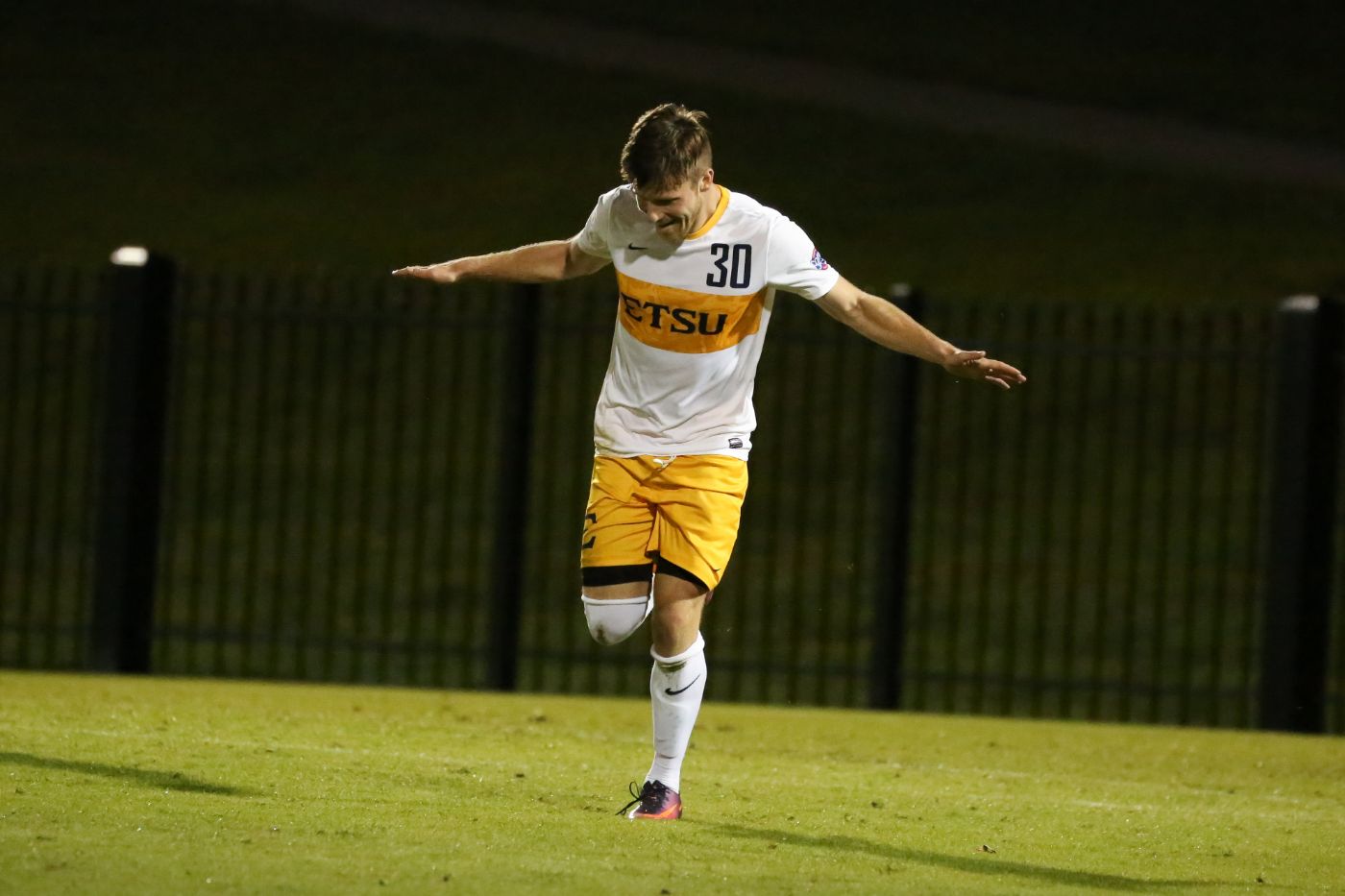 JOHNSON CITY, Tenn. (Oct. 20, 2017) – After earning its second straight victory in a 4-0 shutout over VMI Tuesday, the ETSU men’s soccer team will look for another three points Saturday in Greenville, S.C. against the Furman Paladins.

The Bucs (7-2-5, 4-0-3 SoCon, 15 points) increased their lead in the Southern Conference standings with Tuesday’s win, currently holding a two-point lead over UNCG (13). Furman is in a third place tie with Mercer (11 each), while Wofford falls to fifth (9) and VMI remains last (0).

The Bucs strung together four goals to take down VMI in Johnson City Tuesday, racking up a season-high 31 shots and 15 shots on goal to pressure the Keydets. Junior forward Luke Parker (Memphis, Tenn.) finished with a team-high seven shots and four shots on goal while recording an assist.

The first goal came courtesy of senior Jeffrey George (Saftey Harbor, Fla.), who tapped one in off a play-saving header in bounds from senior Chase Clack (Memphis, Tenn.) for the assist.

Two minutes later, senior Fletcher Ekern (Knoxville, Tenn.) took a clean shot with the VMI keeper out of position to give the Bucs a 2-0 lead in the 38th minute. Ekern was the recipient of a missed 50-50 ball that took a stray bounce his way, forcing the keeper to move out of net.

In the second half, freshman Danny Barlow (Newcastle, England) added his team-high fourth goal this season off an assist from Parker to increase the lead to three-nil. Senior Richmond Taylor (Hendersonville, Tenn.) capped the scoring in the 87th minute off a pass from Josh Denton (Knoxville, Tenn.) for the final score.

After opening the season with a 6-0 record, the formerly ranked Furman Paladins own a 9-4-2 record, giving them the most overall wins among SoCon teams. The Paladins are 3-2-2 in conference matchups, good enough for third place in the standings.

The Paladins are longtime members of the SoCon and were established as a program in 1967. Furman claims 13 conference tournament titles, including back-to-back victories in 2014 and 2015. The program has produced many notable soccer players over the years, including USA National Team standout Clint Dempsey.

Furman is led by longtime head coach Doug Allison, who has spent 22 years with the program.

Allison ranks among the top 20 active coaches in the NCAA, coming into the season with a 267-118-48 overall record (.678). He has nine Southern Conference regular season championships and eight conference tournament wins since taking over in 1995.

Furman has found success on both sides of the ball this season, outscoring opponents 27-13, outshooting while outshooting its opposition 225-114. Furman leads the conference in scoring and in shooting, averaging 1.80 goals per game and 15.50 shots per game.

Leading the charge for the Paladins is junior midfielder Laurence Wyke, who leads the conference with 3.08 shots per game and is second behind Mercer’s Will Bagrou with six goals and 15 points.

The set-up man for Furman this season has been fellow junior midfielder Danny Kierath, who leads the SoCon with six assists (one more than ETSU’s Bruno Andrade). Kierath also nailed a free kick between the pipes in overtime to give his team a 2-1 victory over Mercer Tuesday – his second goal of the season.

Redshirt freshman Ben Hale had started all but one game in goal for the Paladins and has allowed 13 goals this season for a 0.92 goals against average. Hale has five shutouts this season and has recorded 30 saves.

Furman leads the all-time series over ETSU 5-2-5, marking Saturday as the 13th contest between the two schools.

The Paladins are 3-1-2 all-time at Stone Stadium when the Bucs are in town, but are winless in the last two attempts against ETSU.

In each of the last three contests, ETSU and Furman have battled to 0-0 draws, including this year’s contest in Johnson City Oct. 6.

Furthermore, 11 of the 12 matchups have ended in shutouts for either side. The only exception dates back to 2012, where the Bucs and Paladins battled to a 1-1 draw as non-conference foes.

After Sutherland’s record-breaking 183rd save last Tuesday against Mercer, the keeper now has his eyes set on a couple more records. Sutherland now needs four shutouts and four wins to tie the program career records held by Ryan Coulter in each category.

Clack has now played in 5,166 straight minutes, becoming only the second player in ETSU history to hit 5,000 career minutes (Coulter) and the first non-goalie to accomplish the feat. Coulter has 5,855 straight minutes, meaning Clack would need to log 690 minutes to break the cumulative record.

Adding in the 141 minutes he played as a freshman in 2014, Clack also has 5,307 career minutes and needs 548 more to tie Coulter for total career minutes.

After adding his third goal of the season Tuesday, Ekern has 23 career goals and is four goals away from breaking the program career goal record held by David Geno (26).