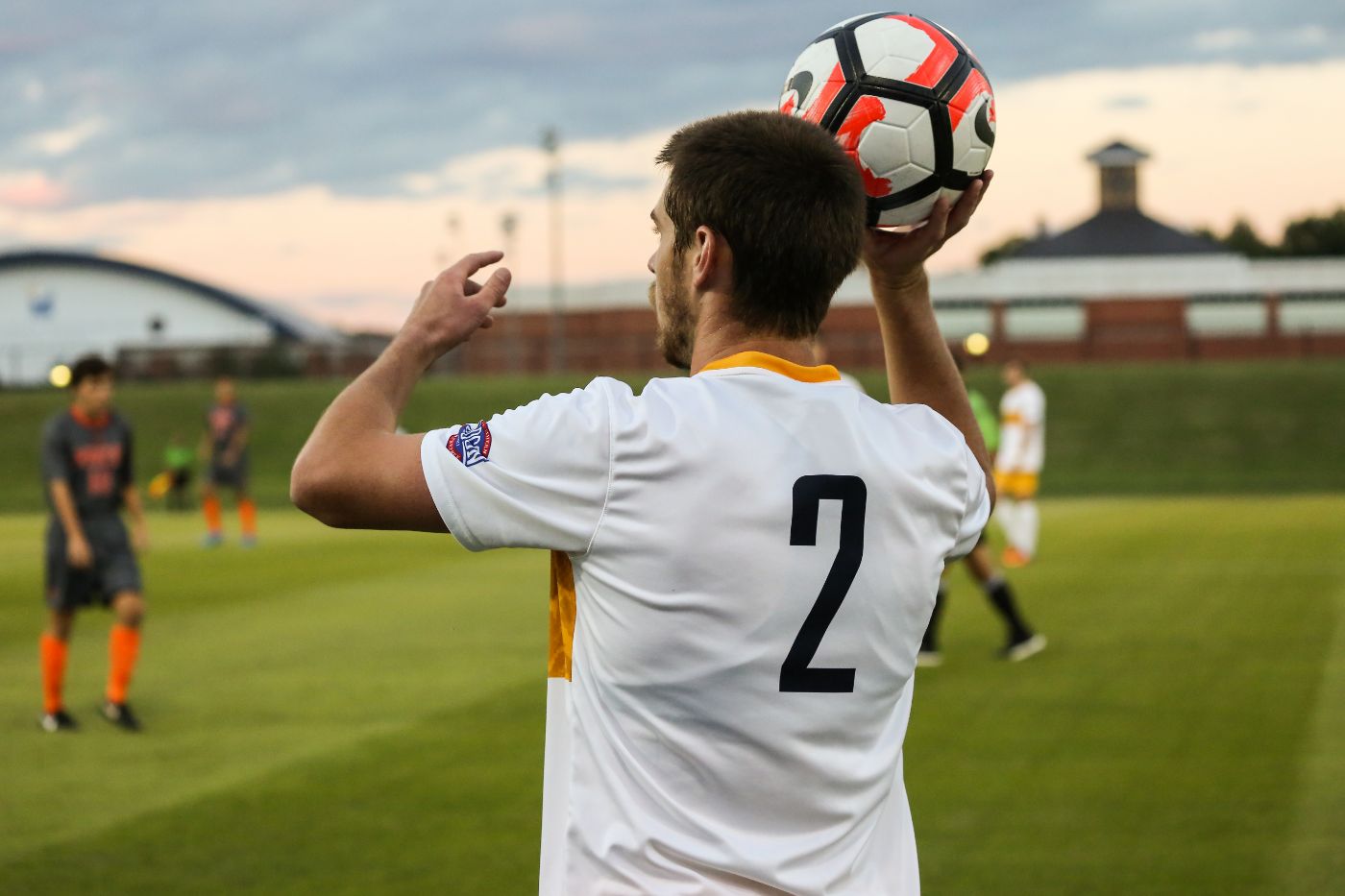 JOHNSON CITY, Tenn. (Oct. 20, 2017) – After clinching a first round bye in the Southern Conference tournament, following a 1-0 overtime win at Mercer, the ETSU Bucs return home to close the regular season against Wofford. Kickoff is set for 7 p.m. at Summers Taylor Stadium.

The Bucs currently sit atop the Southern Conference – tied for first with UNCG – with 19 points. Neither team can finish lower than second in the seeding, meaning both teams will receive byes in the conference tournament.

ETSU holds the tiebreaker over UNCG after winning the head-to-head series 1-0-1, meaning a win or matching result with UNCG Saturday would result in ETSU earning the top seed for the second season in a row.

After battling to overtime with a scoreless draw, ETSU stunned the Mercer Bears with a late goal in the 98th minute to earn a 1-0 victory in Macon, Ga. Tuesday, Oct. 24.

The play started when Ekern crossed a pass intended for freshman forward Danny Barlow (Newcastle, England) from the right side of the box. Barlow, who was heavily defended, forced enough pressure to cause a deflection and ultimately an own goal for Mercer, giving the Bucs the pivotal road win.

In the process, junior goalkeeper Jonny Sutherland (Chester, U.K.) recorded three saves and his eighth shutout of the year.

After starting the season 0-10, Wofford has found new life in conference play with a 4-5 record. After falling 3-2 to ETSU for its 10th loss, Wofford turned around and upset UNCG and Furman on the road to spark momentum. It’s other two wins have come against VMI, including a 6-0 victory last Saturday.

The Terriers began its men’s soccer program in 1975 and has recently seen its fair share of winning records, including five consecutive seasons dating back to 2012. Last season, Wofford compiled its second highest win total in program history, finishing 12-7.

Wofford is coached by 10th year head man Ralph Polson. Polson led his team to two conference titles within his first seven seasons and is responsible for the second-most wins in program history.

Wofford has scored 19 goals since its last meeting with ETSU Sept. 30, a large improvement from its previous total of four goals through the first nine games. Wofford now averages 1.35 goals per game.

Furthermore, Wofford has only suffered one shutout since kicking off conference play. That shutout came in the Terriers’ last game against Furman, which spoiled Wofford’s senior night in a 2-0 final.

In goal, sophomore Matthew Reynolds and junior Hunter Wages have split time almost equally, with Reynolds receiving nine starts and Wages earning eight. Each have played a little over 700 minutes apiece, and both have near identical save percentages (Reynolds .586 and Wages .581).

Tomorrow will mark the 12th all-time meeting between ETSU and Wofford, dating back to 2008. Polson has been on the sideline for every meeting in the series, while ETSU head coach Bo Oshoniyi will face the team for the ninth time.

ETSU leads the all-time series with a 6-3-2 record, including a 3-0-2 mark in Summers Taylor Stadium. The Bucs have also won four of the last five contests.

Home field advantage meant something to both teams, as ETSU’s 3-2 win earlier this year marked the first time the Bucs have beaten Wofford on the road in the Bo Oshoniyi era. The previous three attempts, dating back to 2014, eluded the Bucs.

Last season, the teams spilt the regular season. Wofford struck first with a 1-0 victory at Snyder Field in early October before ETSU would answer 11 days later with a 2-1 win in Johnson City.

After Sutherland’s record-breaking 183rd save two weeks ago against Mercer, the keeper now has his eyes set on a couple more records. Sutherland now needs three shutouts and three wins to tie the program career records held by Ryan Coulter in each category.

Sutherland is also two saves away from the 200 save milestone and would become the only ETSU keeper in history to hit that number.

Senior defender Chase Clack (Memphis, Tenn.) has now played in 5,375 straight minutes, becoming only the second player in ETSU history to hit 5,000 career minutes (Coulter) and the first non-goalie to accomplish the feat.

Coulter has 5,855 straight minutes, meaning Clack would need to log 481 minutes to break the cumulative record. Adding in the 141 minutes he played as a freshman in 2014, Clack also has 5,516 career minutes and needs 339 more to tie Coulter for total career minutes.

After adding his third goal of the season last Tuesday, Ekern has 23 career goals and is four goals away from breaking the program career goal record held by David Geno (26).