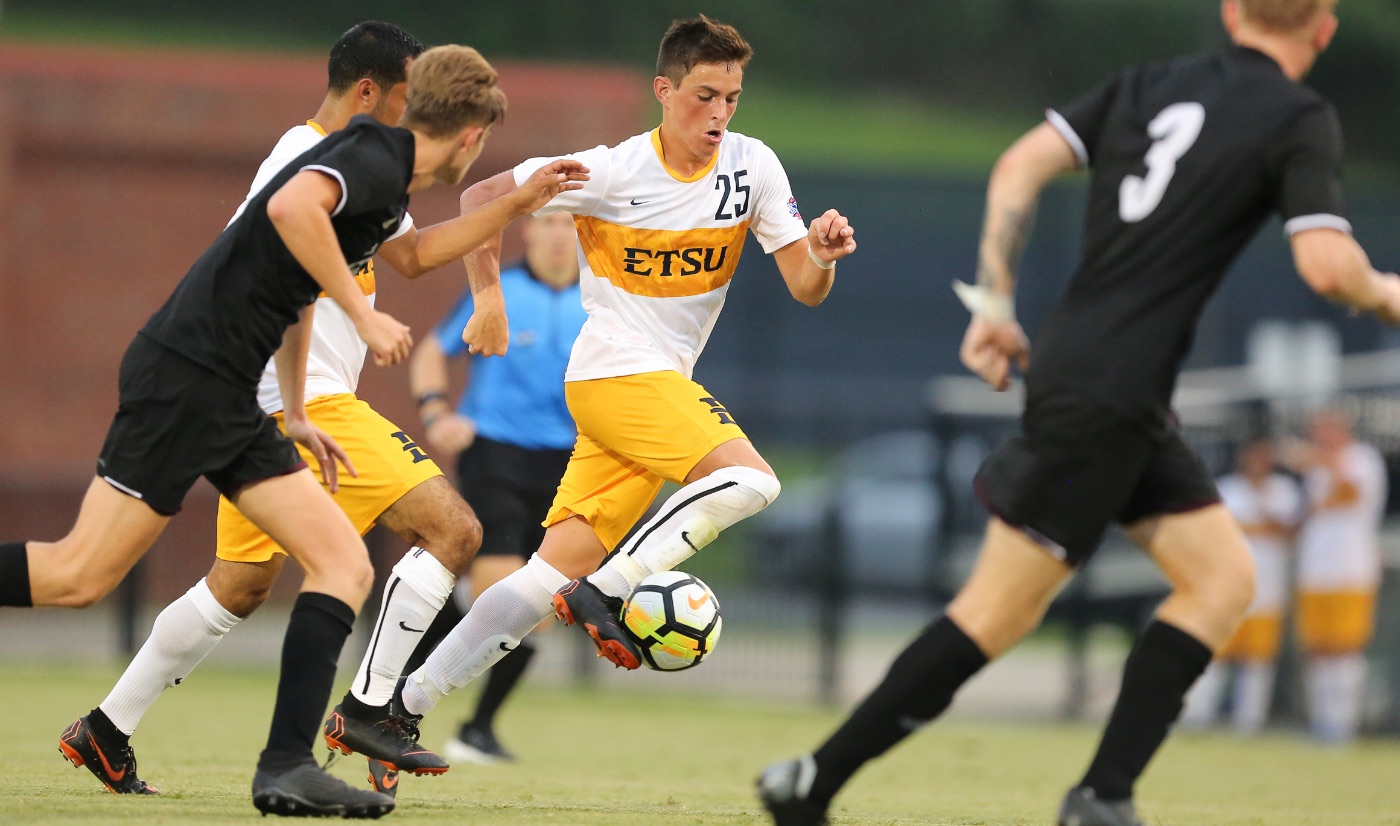 JOHNSON CITY, Tenn. (Aug. 15, 2018) – The ETSU men’s soccer team had its hands full Wednesday night at Summers-Taylor Stadium, but surged to a 5-4 come-from-behind victory over the Campbellsville Tigers.

After an up-and-down first half that ended in a 4-4 tie, the Bucs would score the go-ahead goal in the 51st minute and hold on for the win. ETSU maintained possession for the majority of the second half, attempting five corner kicks with 18 shots while limiting Campbellsville to three second half shots.

After setting foot on campus for the first time 48 hours prior to tonight’s contest, freshman newcomer Luke Howson (Sheffield, England) scored the game-winner for ETSU. The score rolled past a diving keeper to the right corner off an assist from senior Cameron Woodfin (Old Hickory, Tenn.).

A high-scoring affair started rough for ETSU in the opening minute, as an intercepted pass from the goalkeeper position allowed Campbellsville to take an early 1-0 lead 50 seconds into the friendly.

The ETSU equalizer set the tone for a back-and-forth half in the fifth minute of play, as sophomore Danny Barlow (Newcastle, England) buried a pass from junior Bruno Andrade (Sao Paulo, Brazil) to tie the game at 1-1.

The Tigers would shock ETSU with a swift shift in momentum the next 10 minutes of play, scoring three goals off a trio of defensive miscues. Campbellsville’s Lucas Batistela was the catalyst, scoring the first two goals before forcing an own-goal with his set piece on the third score.

Trailing 4-1, ETSU would not give up.

Barlow gave the Tigers a taste of their own medicine with an intercepted outlet pass from the goalkeeper, burying a 10-yarder for his second score of the night. Fellow sophomore Josh Denton (Knoxville, Tenn.) followed up Barlow with two scores of his own to tie things up before the half.

Denton’s first goal came off an assist from Javier Alberto (Johnson City, Tenn.) just inside the 18’ with 20 minutes remaining until halftime. ETSU ended the half on a positive note with Denton’s second score, receiving a deep set-up pass from Dehai Abraham (Orlando, Fla.) to even the score.

ETSU finished with 24 shots, 10 shots on target and six corners for a solid night offensively. The Bucs also limited Campbellsville to eight shots and a lone corner on the night.

Goalkeeping duties were split in the two halves between Josh Perryman (Sheffield, England) and Trevor Mulqueen (Bradenton, Fla.), respectively, as each recorded one difficult save apiece. Mulqueen turned in a solid collegiate debut, helping shut out the Tigers in the second half.

The Bucs will travel to Radford for its final exhibition Tuesday, Aug. 21 at 7 p.m. before commencing regular season play at No. 3 North Carolina Aug. 24 in Greensboro, N.C. at Bryan Park.