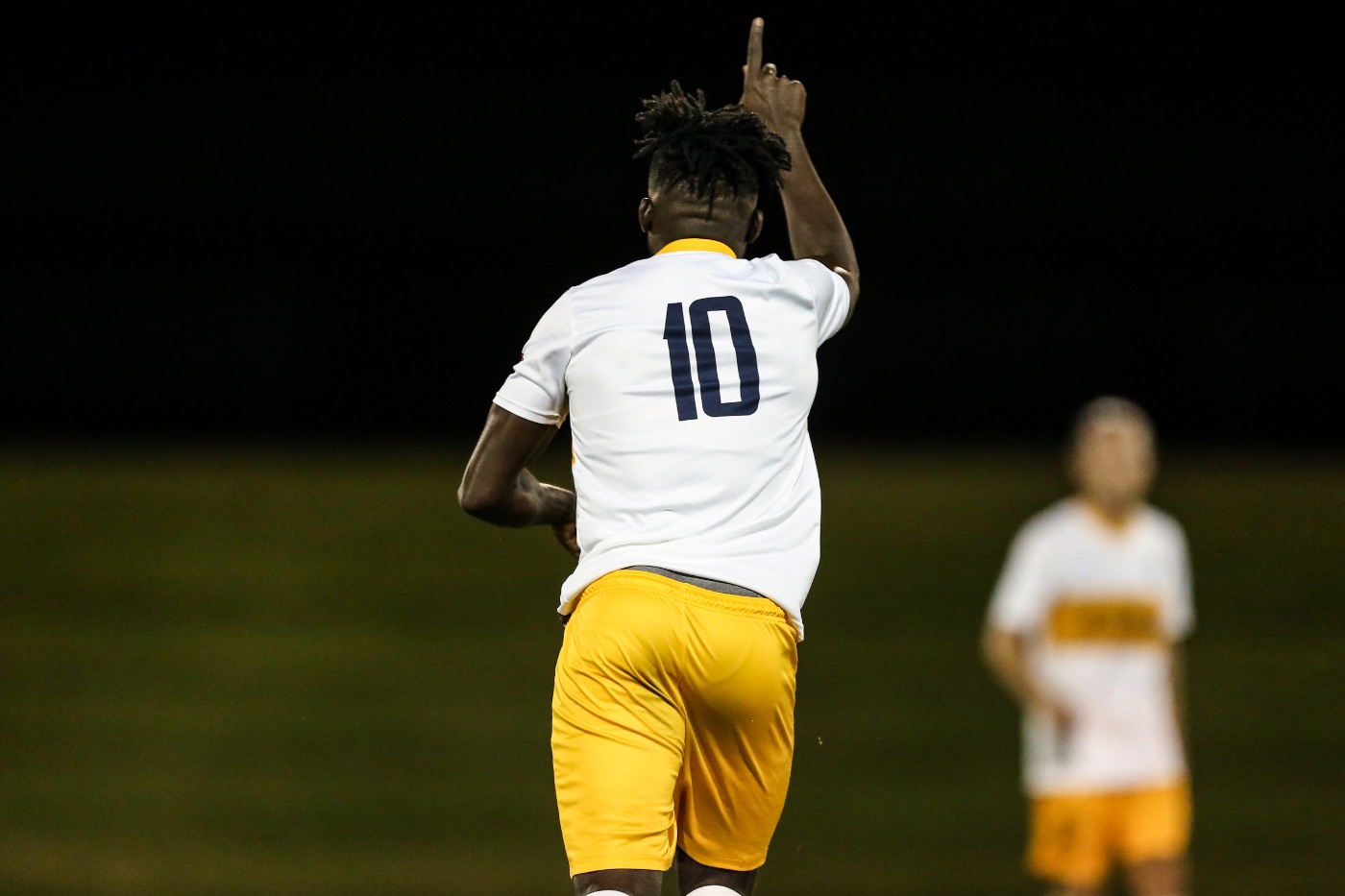 Following the men’s soccer match Tuesday afternoon, the ETSU volleyball team continues the evening in Brooks Gym as it hosts the Tennessee Volunteers in its season opener at 7 p.m.

Fans are encouraged to wear blue to both events tomorrow, as the ETSU volleyball game will be a “Blue Out” game.

The Bucs opened its home schedule against High Point last Friday, falling in a double-overtime heartbreaker to the Panthers, 3-2.

The ETSU home opener saw a scoreless first half, a second half loaded with offense with two goals on each side, capped off by a golden goal in the 102nd minute.

The game-winning goal for High Point saw a heads-up play by Jonathan Bolanos inside the ETSU box, taking advantage of a defensive miscommunication to intercept a goalie toss-in for the winning score.

Both ETSU goals came as answers to an High Point score, as Bruno Andrade (Sao Paulo, Brazil) took a pass from Austin Bihlmeyer (Knoxville, Tenn.) and centered a shot from two feet outside the box and into the net for his first score of the year. Andrade’s goal brought the score to 1-1 in the 63rd minute.

Behind 2-1 with less than 10 minutes remaining in regulation, redshirt freshman Kyle Hellmann (Nashville, Tenn.) scored his first-career goal in clutch fashion. Hellmann took a pass from Javier Alberto (Johnson City, Tenn.) and tied the game in the 82nd minute. His kick came from about 25 yards out, sailing in past a diving keeper.

The sides headed to overtime tied up 2-2, with the only second half shot coming off the foot of Serge Gomis (Dakar, Senegal). Gomis, who entered late in the game after missing his first start of the year, beamed one at goalkeeper Keegan Meyer, who corralled it in for the save to set up the second overtime golden goal.

ETSU completed the 2017 season with a 9-2-7 record that included its first undefeated run in conference play at 6-0-4. Mercer, who went on to win the tournament in Greenville, S.C, edged the Bucs in the SoCon semifinals on penalty kicks.

The Bucs — who were picked to finished third behind UNCG and Furman, respectively, in the SoCon preseason poll this year — had two all-conference preseason selections in senior Cameron Woodfin (Old Hickory, Tenn.) and redshirt sophomore Joe Pickering (East Sussex, England).

Woodfin led the entire nation in assists in 2016 with 12, but due to injuries, Woodfin cut his season short after three games in 2017. Pickering, who was the SoCon Freshman of the Year in 2016, played one game last season before joining Woodfin on the injury redshirt list. He scored on his only shot of the season versus Kentucky. Each played finished with one goal last year.

Last season, the Flames finished 10-6-1 with a 5-3 record in the Big South Conference. The team also finished 7-2 at home last year — with one of the two losses coming against ETSU. This season, Liberty will compete in the ASUN conference as a first-year member.

Liberty senior forward Tresor Mbuyu leads the team with three goals so far this year — all of which came against the Keydets for his first career hat trick. He also has two assists this season for eight points.

In goal, the Flames typically roll with redshirt freshman Logan Engbers. Engbers has played in all but 27 minutes this season and holds a goals allowed average of 1.47. The Ontario native has nine saves for a .692 save percentage.

The Bucs are a perfect 2-0 against Liberty in the all-time series.

The most recent contest came last season on the road, as ETSU grinded out a 1-0 victory over the Flames in Lynchburg, Va. Former ETSU player Richmond Taylor scored the winning-goal off an assist from Andrade.

The sides first matched up in 2015 at Summers-Taylor Stadium in a competitive battle, as the Blue and Gold earned the 1-0 win.

The lone goal came in the 79th minute on a penalty kick by former Buc James Smith. Smith played for ETSU in 2015 before moving to the bench as a graduate assistant coach in 2016.