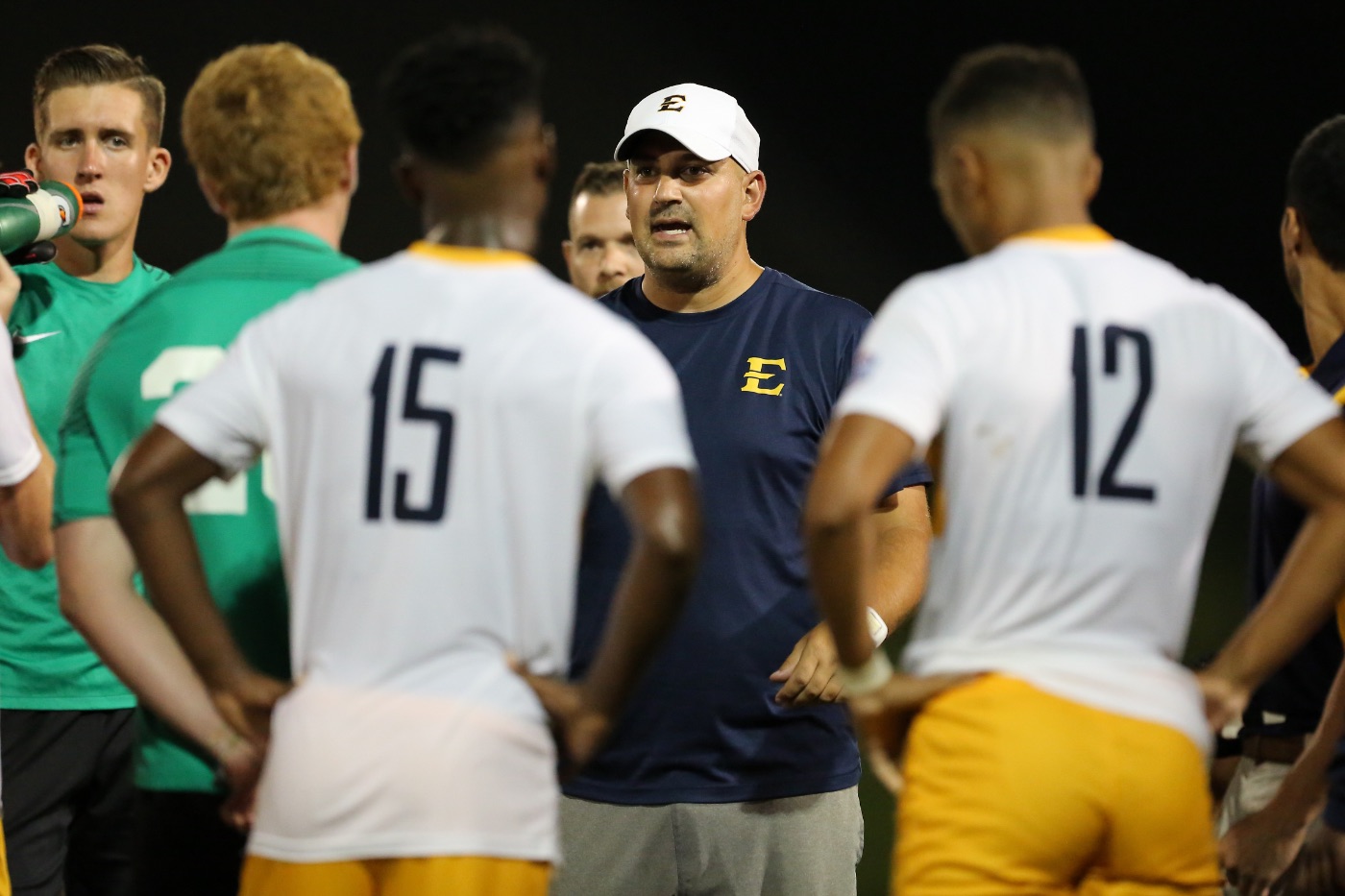 JOHNSON CITY, Tenn. (Sept. 25, 2018) – Coming off back-to-back road wins, the ETSU men’s soccer team hopes to achieve the trifecta Wednesday night as it ends a road swing against No. 7 Kentucky in Lexington.

For the first time since leaving Lexington to join the Bucs on March 29, 2018, first year ETSU head coach David Casper will lead the team against his former school. Casper spent five years with the Wildcats as an integral part of the staff, helping the team achieve national success.

Tomorrow’s match will mark ETSU’s third top-ten opponent of the season, putting ETSU high among the NCAA leaders in strength of schedule. Kickoff between the No. 7 Wildcats and the Bucs is set for 7:30 p.m.

Tomorrow night's contest will be streamed on SEC Network+ and can be found in the links below. Live Stats are also available.

With the score level at 1-1, junior Bruno Andrade (Sao Paulo, Brazil) blasted a shot off a Georgia Southern defender, which ricocheted into the net for to go-ahead score.

In the first half, the Bucs took an early lead thanks to Danny Barlow (Newcastle, England) scoring his fifth goal of the season off an assist from Cameron Woodfin (Old Hickory, Tenn.). Woodfin’s assist was his 20th career assist, tying him with David Geno for the all-time program record.

The Eagles answered in the 43rd minute, stealing momentum heading into halftime. ETSU continued to fight its way to the win, outshooting Ga. Southern 14-12 for the game.

Tomorrow marks the seventh all-time matchup between ETSU and Kentucky. All seven games have taken place each year since the 2012 season.

Kentucky has won the last two contests by one-goal margins, including last season’s 2-1 victory late in double-overtime. The Bucs took the early lead, but two late goals allowed UK to avoid the draw and pick up the win just before time expired.

The last time ETSU and Kentucky played in Lexington was in 2016. UK won in double-overtime with a late goal, 1-0.

ETSU’s last win over UK came in 2015 over in Johnson City by a final of 3-1. Cameron Woodfin, Luke Parker, Javier Alberto and John Lucchesi are the only remaining members of that 2015 team.

So far, ETSU holds a 4-4 record through a tough eight-game stretch. In some RPI ratings, ETSU’s strength of schedule has been ranked as high as third in the nation out of 206 Division 1 teams.

Five of the Bucs’ eight opponents so far finished with a top-100 RPI, including its two season-opening ACC opponents in No. 3 North Carolina and then-No. 5 Wake Forest — who has been the top-ranked team in the country in most polls. No. 7 Kentucky will be ETSU’s third top-ten opponent this season. Additionally, Appalachian State held a 4-0 record prior to falling to ETSU.

The team continues to be captained by preseason All-SoCon selection Cameron Woodfin (Old Hickory, Tenn.). Woodfin, who has three assists so far, led the entire nation in 2016 with 12 assists to become a statistical champion. Woodfin redshirted last season due to injury.

Last time out, Woodfin tied the all-time career assists record at ETSU. He currently has 20 for his five-year career, joining David Geno (2010-13) atop the record board.

Replacing ETSU’s first-ever All-American Jonny Sutherland in goal, redshirt freshman Josh Perryman (Sheffield, England) has started all eight games and has recorded 25 saves against stiff offensive competition. He has two shutouts and had a career-high five saves at Lipscomb.

The No. 7 Wildcats are off to a remarkable 6-0-1 start this season. More impressively, Kentucky has conceited only two goals through seven games all season, leading the nation with a .857 shutout percentage.

Statistically, the Wildcats have proven to be a defensive team. Sophomore Enrique Facusse is the key cog in the machine, accounting for a nation-leading six shutouts and a .900 save percentage — the fourth best in all of NCAA Division 1.

The offense has also helped Kentucky remain unbeaten with 11 goals in seven contests. Junior forward JJ Williams leads the team with five goals. Williams has made the scorebook in five of the last six games with either a goal or an assist.

The only common opponent between ETSU and Kentucky is Lipscomb. The Wildcats held off Lipscomb 3-2 in overtime, allowing its only two goals of the season against the Bisons. The Bucs defeated Lipscomb 3-1 in Nashville.