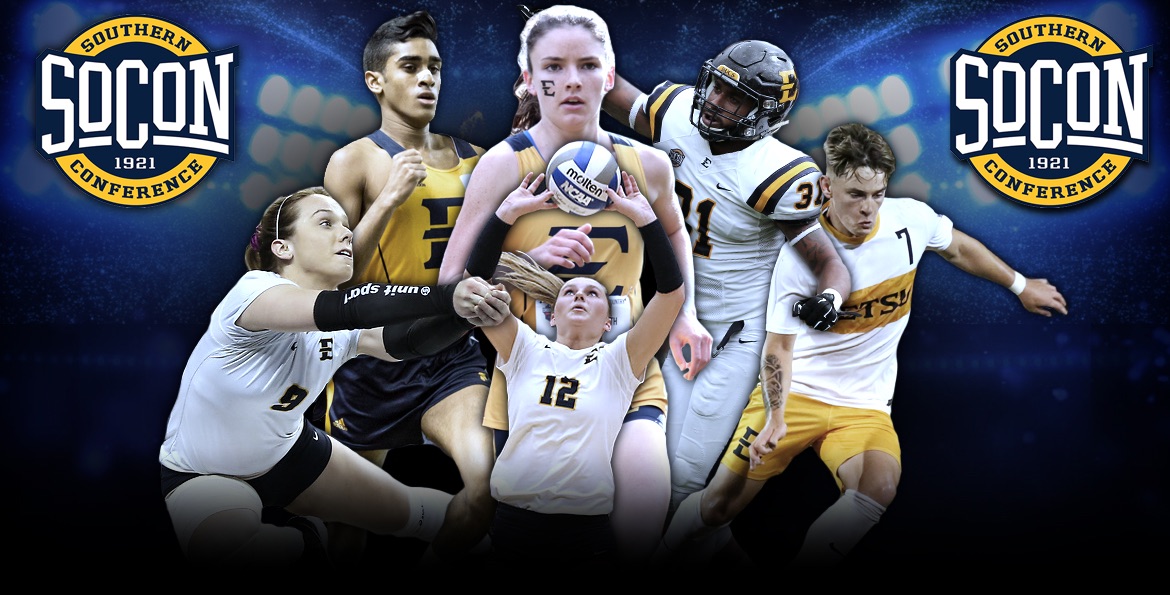 SPARTANBURG, S.C. (Oct. 4, 2018) – After a month of highlights for the ETSU Athletics Department, the awards kept pouring in for the Blue and Gold, as six Buccaneers earned Southern Conference Athlete of the Month honors for September, announced the league office on Thursday.

Folks, who was tabbed Defensive Player of the Month, registered 37 tackles, 6.5 tackles for loss, 4.5 sacks, one forced fumble, one interception and six hurries in five games for the Blue and Gold, while helping lead ETSU to a 4-1 overall record and 3-0 mark in SoCon play. Folks has totaled at least seven tackles in all five games, while combining for at least a sack in three contests and combining for a tackle for loss in four games in the month of September.

The Buccaneer linebacker was named SoCon Defensive Player of the Week after his 8-tackle, 3.5-sack, 1-interception in the win over VMI. Folks’ 3.5 sacks against the Keydets are the second-most by an FCS player this player. Folks also added half-sacks in wins over Mars Hill and Chattanooga, while adding eight tackles and 1.5 tackles for loss against the Mocs.

With his presence, Folks has the Bucs leading all FCS teams in tackles for loss (9.8), ranking third in sacks (4.0), fourth in rushing defense (72.8) and ninth in fumbles recovered (6.0). Individually, Folks ranks 29th among FCS players in sacks per game (0.9).

Stallworth ended September with three strong finishes in distance races, including a fourth-place finish in the Virginia Tech Alumni Invite 6K with a time of 22:16. For her performance in that race, Stallworth was named SoCon Runner of the Week. Stallworth also logged a 31st place showing out of 226 runners in a loaded field at the Louisville XC Classic.

Varghese paced the Bucs in two top-five team finishes for September. At the Virginia Tech Alumni Invite, Varghese finished as the top attached runner of the 89-man field with a 24:05 time. Varghese ended the month finishing third out of 252 athletes in the Louisville XC Classic in the 8K, averaging an impressive 4:47 mile throughout the race.

Barlow’s second-half goal at Lipscomb broke a 1-1 tie in the 57th minute, helping ETSU to a 3-1 road win. The following weekend at Georgia Southern, Barlow gave the Bucs momentum with an impressive move to beat the keeper and give the team a 1-0 early lead — ultimately resulting in a 2-1 win. Barlow played in 484 minutes in September, taking 19 shots and 10 shots on goal to lead the team in both categories.

Senior setter Kvarta helped lead the Bucs to a 9-3 record in month of September with wins over Tennessee, Duke and No. 22 Washington State. Kvarta played in 12 matches registering 36 kills, 25 total blocks, 12 service aces, 104 digs and 496 assists. Throughout the month of September, she recorded five double-doubles, was named the Bruiser Showcase MVP, named to the Duke Invitational All-Tournament Team and was named the SoCon Offensive Player of the Week on Sept. 10. In the Bucs’ 3-2 win over Tennessee, Kvarta tallied 47 assists and a new personal-high of 21 digs. She had three straight matches where she recorded 45 or more assists in the match. She recorded a new season-high of 53 assists in the Bucs’ upset over No. 22 Washington State and then registered 2,000 career assists in ETSU’s sweep against Western Carolina on Sept. 19.

Throughout the month of September, libero Popovic played in 12 matches to record 12 service aces, 239 digs and 53 assists. She has recorded 10 or more digs in all of the Bucs’ matches so far this season. She has four straight performances of 20 or more digs. Popovic recorded 33 digs against Samford last weekend was just one dig away from tying her career-high. She was named the Defensive Player of the Week on Sept. 3 and has been a key player in the Bucs’ success this season.