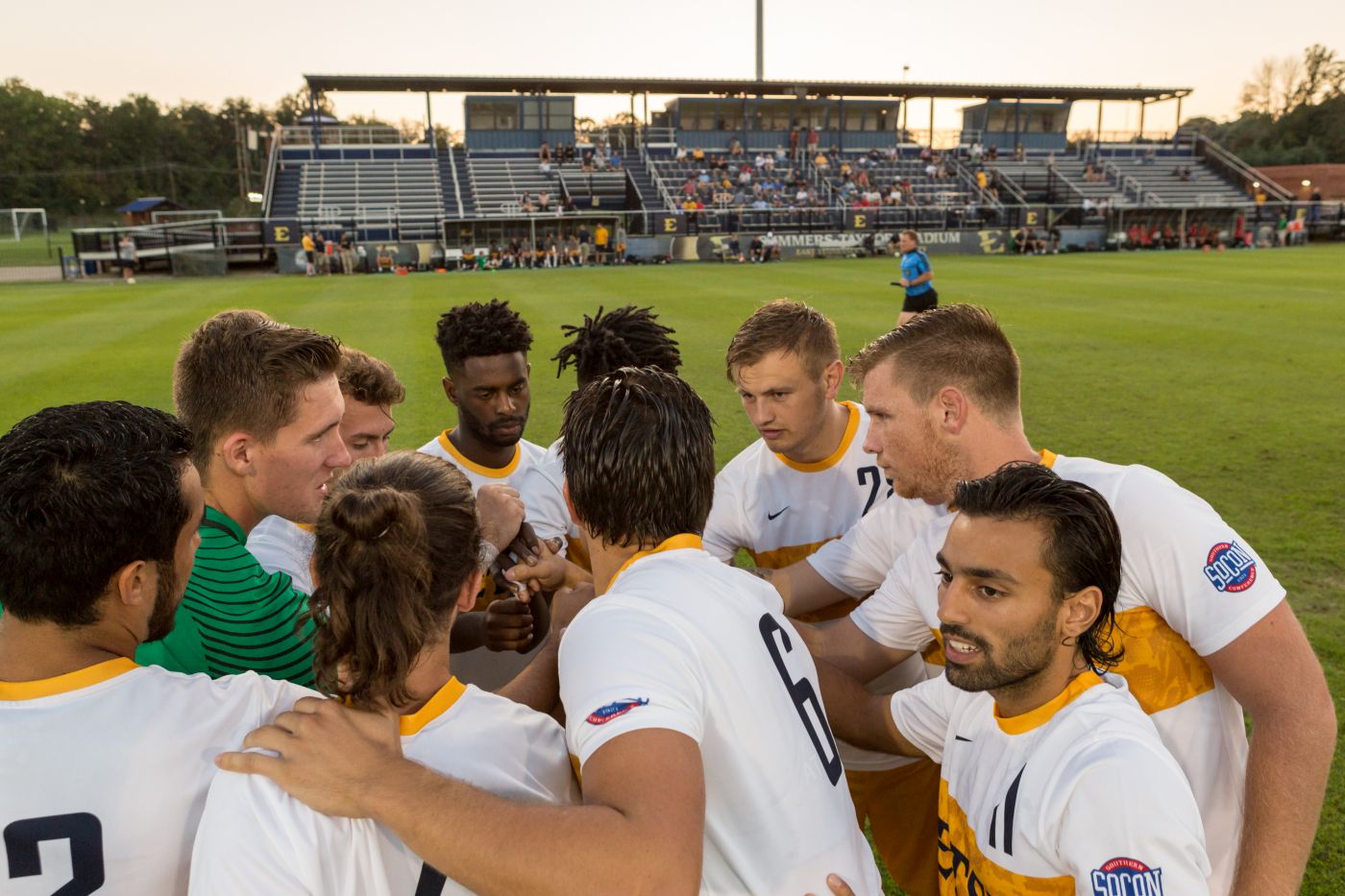 JOHNSON CITY, Tenn. (Oct. 2, 2018) – After ending a tough non-conference slate with a 5-5 record and a No. 20 RPI ranking in some polls, the ETSU men’s soccer team moves into the Sothern Conference portion of the 2018 campaign.

The Bucs open SoCon season on the road against Wofford in Spartanburg, S.C. on Saturday, Oct. 6 with kickoff set for 7 p.m.

The game will be streamed on the SoCon Digital Network free of charge. Live stats will also be available for the contest.

ETSU pulled out its most dramatic win of the 2018 season, scoring two late goals in the 80th and 81st minutes to overcome a 1-0 deficit and defeat Marshall 2-1 in Johnson City Wednesday night.

After falling behind in the 75th minute and feeling a sense of dejection that comes with a late score, the Bucs did not quit. With under 11:00 remaining, sophomore newcomer Mohamed Jawara (Paris, France) took a lead pass from Dehai Abraham (Orlando, Fla.) and rolled it through to tie the game and send the Buccaneer fans into a frenzy.

Less than a minute later, the Summers-Taylor crowd erupted again as ETSU took the lead. Freshman Danny Barlow (Newcastle, England) reversed roles from his usual goal-scoring ways, setting up senior Cameron Woodfin (Old Hickory, Tenn.) who headed in the game-winner inside the six.

So far, ETSU holds a 5-5 record through a tough ten-game stretch. In some RPI ratings, ETSU’s strength of schedule has been ranked as high as second in the nation out of 206 Division 1 teams. It’s currently ranked fourth in the latest RPI projection.

Six of the Bucs’ 10 opponents so far finished with a top-100 RPI, including thee top-ten teams in No. 3 North Carolina, No. 5 Wake Forest and No. 7 Kentucky. Additionally, Appalachian State held a 4-0 record prior to falling to ETSU.

The team continues to be captained by preseason All-SoCon selection Cameron Woodfin (Old Hickory, Tenn.). Woodfin, who has three assists so far, led the entire nation in 2016 with 12 assists to become a statistical champion. Woodfin redshirted last season due to injury.

Two weeks ago at Ga. Southern, Woodfin tied the all-time career assists record at ETSU. He currently has 20 for his five-year career, joining David Geno (2010-13) atop the record board.

Replacing ETSU’s first-ever All-American Jonny Sutherland in goal, redshirt freshman Josh Perryman (Sheffield, England) has started all nine games and has recorded 30 saves against stiff offensive competition. He has two shutouts and had a career-high five saves at Lipscomb.

The Terriers are off to a 1-7-1 start and are in the midst of a five-game losing streak. Their lone with this season came on the road at Winthrop in a 1-0 victory.

Statistically, low-scoring games favor the Terriers as both its win over Winthrop and draw with Gardner-Webb came via shutouts. Power Five opponents South Carolina (C-USA for men’s soccer) and Duke are the only two schools to score more than three goals on Wofford.

Wofford’s lone representative on the 2018 SoCon preseason all-conference team is junior midfielder and Johnson City native Lucas Altman. The Science Hill graduate has started every game and is among the team leaders in minutes. He is tied for the team-lead in shots with 11, but has not scored so far this season.

Redshirt freshman Shane Berson stands between the pipes for Wofford and has recorded 23 saves for a .561 save percentage. He has two shutouts so far and holds a goals against average of 2.20.

ETSU holds the all-time series advantage over Wofford with a 7-3-2 record against the Terriers.

The last matchup between ETSU and Wofford took place in the 2017 season finale, as the Bucs defeated Wofford 4-1 to secure the SoCon regular season championship. The game was called in the 71st minute due to heavy rainfall and unplayable field conditions, and ETSU was awarded the victory.

In the last contest, Austin Bihlmeyer (Knoxville, Tenn.) recorded his first career goal as he put one through with 16 seconds left before the half. That was the fourth of ETSU’s four goals, as Danny Barlow had a three-point game with a goal and an assist earlier in the contest.