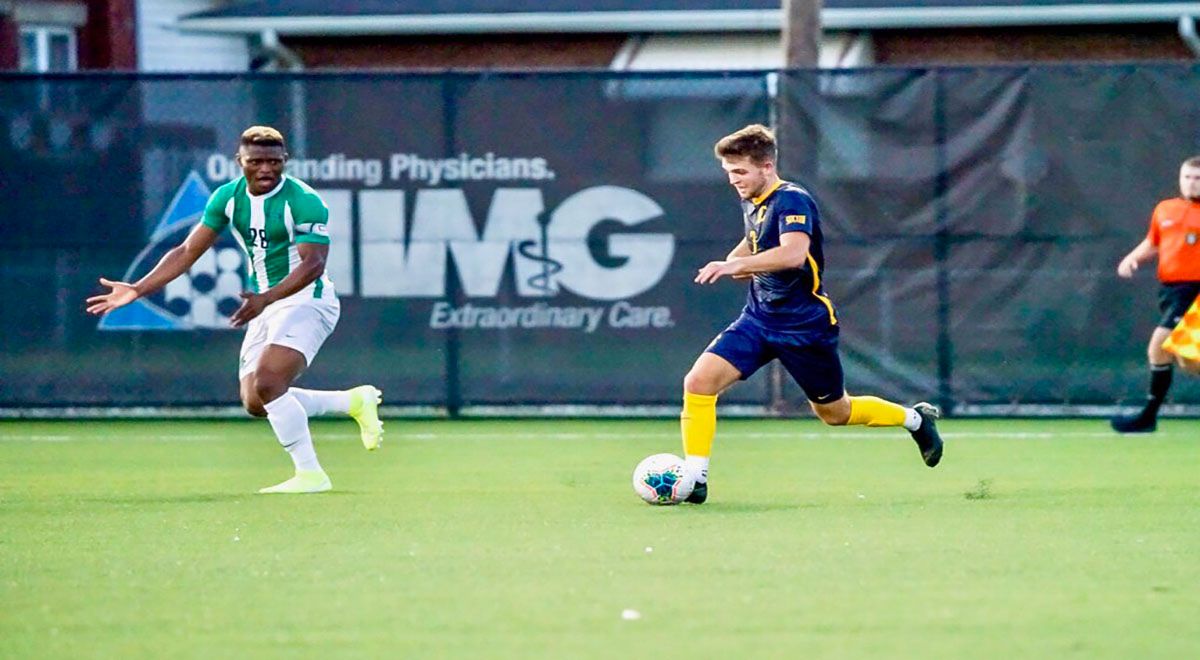 HUNTINGTON, W. Va. (Sept. 10, 2019) – In a heated contest both on and off the field, the ETSU men’s soccer team fell in a narrow 2-1 scoreline to Marshall on Tuesday afternoon at Hoop’s Family Field. The Bucs fall to 1-3 on the season as the hosts improve to 3-0-1 on the year.

The Bucs created the best opportunity in the early stages of the match through a set piece. Freshman Bradley Empson (London, England) found the head of Luke Parker (Memphis, Tenn.) as the senior’s shot was cleared off the line from a Marshall defender before a second effort went well over the goal, not threatening the Herd keeper.

Both sides struggled to settle in, with 18 fouls being called between the two teams in the half. In one of the best chances in the first half for Marshall, Jonas Westmeyer stepped up to take a free kick, sending his shot over the Buccaneer wall and heading to the top left corner. Josh Perryman (Sheffield, England) equaled the task, stretching well to parry the effort out of danger.

The Thundering Herd soon turned their late pressure into fruition, as Pedro Dolabella met a Jamil Roberts pass and sent his header into the goal to put the hosts ahead just three minutes before the half.

After an initial wave of shots from Marshall on the other side of the break, the Bucs would restore the scoreline in the 55th minute through Hauk Andreas Fossen (Moely, Norway).  The forward bundled home a scramble in the box on his second effort, scoring his second of the year for the Bucs.

The hosts reestablished their lead just moments later from Max Schneider. The freshman scored his first goal for his side after being the capitalizing from a Herd corner kick as Marshall retook a 2-1 lead.

The Buccaneers spent the next half hour searching for the second equalizer of the evening, coming closest from Jeremiah Edouard (Pompano Beach, Fla.). The freshman received a ball on the right side of the box and curled his effort over the keeper, but the attempt rippled the top of the netting and went out as a Marshall goal kick as the hosts held on for the win.

The Herd outshot ETSU 13-9 on the night, just edging the Bucs in shots on target 5-3. Both sides committed 14 fouls throughout the contest. Perryman ended the night with three saves as six different Bucs registered at least one shot on the night.