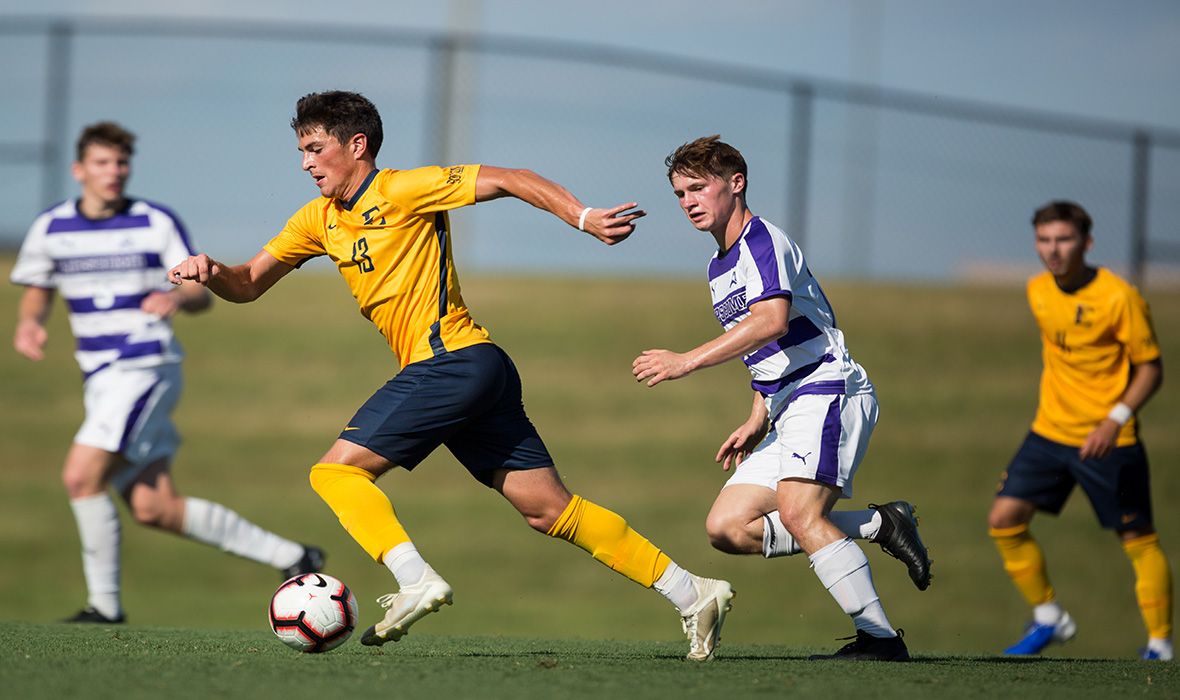 Bucs Return From Week Hiatus Against the Blue Hose
Presbyterian at ETSU | September 17, 2019

JOHNSON CITY, Tenn. (Sept. 16, 2019) – ETSU men’s soccer continue their non-conference action on Tuesday evening, taking on Presbyterian in their second game of the season in the friendly confines of Summers-Taylor Stadium at 7 p.m.

The Bucs had a week off in between their last contest, heading to West Virginia to take on the Marshall Thundering Herd. After conceding in the first half, the Bucs replied early in the second to equalize. The Herd responded with an immediate reply, replenishing their one goal advantage and their eventual scoreline, sending the Bucs home in a narrow 2-1 fashion.

Mike Gallagher takes the call on play-by-play for the Bucs on ESPN+. Live stats will be available for the evening’s contest as well.

Head coach David Casper has kept a steady rotation in the midfield for the opening four games of the season. Freshmen Bradley Empson (London, England) and Kieran Richards (Hamilton, New Zealand) joined returner Luke Howson (Sheffield, England) to hold down the center of the pitch in all four starts. Josh Salinas (Stafford, Va.) started in the first three matchups of the season, while Jeremiah Edouard (Pompano Beach, Fla.), Gilly Miller (London, England), Simon Chretien (Christchurch, New Zealand) and Jordan Broadwater (Kingsport, Tenn.) all provided depth amongst the midfield throughout the first two weeks of the season.

Leading the attack in its early stages has been Luke Parker (Memphis, Tenn.) and Mathias Aannestad (Tønsberg, Norway). Both Hauk Andreas Fossen (Moely, Norway) and Josh Denton (Knoxville, Tenn.) split duties up front over the course of the early stages of the season.

The Blue Hose have started off their season on a rocky note, opening with an 0-5 record in the young campaign. All but one of their contests have been decided by one goal, their 3-0 defeat to UNC Wilmington being the only outlier on the season thus far.

Opponents hold a 10-3 advantage in goals on Presbyterian, only outshooting the Blue Hose 54-48. Goals have came through Sergio Pinto, Riccardo Turcis and Luca Ziegler, while Chris Salamatou has the solo assist on the year for the visiting side.

Valentin Kliebe has held down the Presbyterian net in the early going stages, playing in all 450 minutes of the season. The redshirt sophomore has 15 saves on the year, collecting a .600 save percentage while allowing two goals per game.

ETSU hosts Presbyterian for their third matchup in the series history and the first since 2012. The last time the two sides met at Summers-Taylor, ETSU cruised to a 3-0 victory in the 2011 season. The following year, both sides played out to a 0-0 draw after 110 minutes.