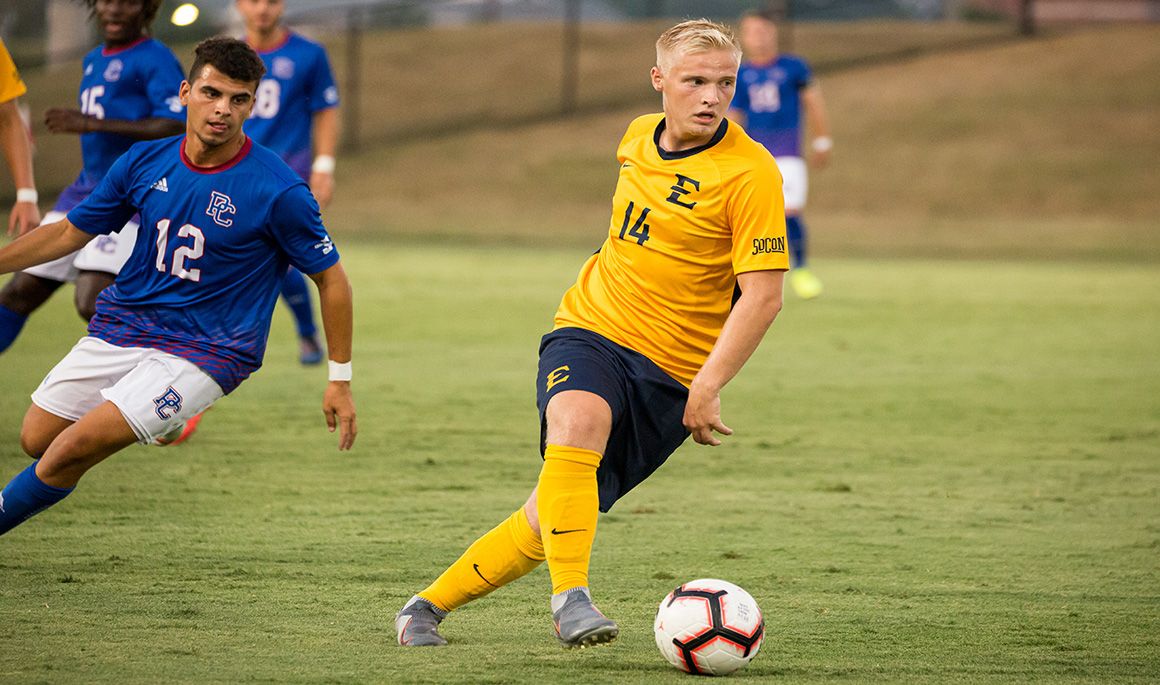 JOHNSON CITY, Tenn. (Sept. 27, 2019) – The ETSU men’s soccer team (3-3) prepares for a home-and-away trip over the next four days, as the Bucs take on Georgia State at Summers-Taylor Stadium on Saturday at 7 p.m. before taking the short trip to Boone, N.C. for a matchup against Appalachian State on Tuesday evening.

In back-to-back matches the Bucs have recorded a clean sheet, knocking off High Point on the road in a strong 2-0 win. Hauk Andreas Fossen (Moely, Norway) grabbed a first-half brace on his way to winning the SoCon Offensive Player of the Week while Josh Perryman’s (Sheffield, England) second consecutive shutout helped sweep the accolades as he earned the SoCon Defensive Player of the Week.

Play-by-play commentator Mike Gallagher will be on call for the action against Georgia State. Kickoff is slated for 7 p.m. and will be broadcasted through ESPN3

App State and ETSU head to battle and can be found AppVision, the Tuesday contest taking place at 7 p.m.

Norwegian strike partners and Mathias Aannestad (Tønsberg, Norway) and Hauk Andreas Fossen (Moely, Norway) have helped operate in the forward position early on, scoring five goals between the pair of them. Josh Denton (Knoxville, Tenn.) has provided cover in the early stages while Parker has also been deployed up front in a two-striker system.

Georgia State’s 4-0-2 mark is the best six-game start under 10th-year head coach Brett Surrency. The Panthers are two wins/draws away from the best start to a season in school history. The Panthers are ranked No. 8 in the latest United Soccer Coaches Association Southeast Region rankings.

Aris Briggs has tallied eight goals through six matches, leading all Division I men’s soccer players with a 1.33 goals per game average. Briggs’ eight goals are also tied for the second-most in the country in Division I. Junior midfielder Dylan Morris has tallied three assists this season, tied for the most among all players in the Sun Belt.

GSU goalkeeper Paul Tyson finished with three saves against Winthrop and recorded his second shutout of the year. The redshirt junior has been an ever-present in the Georgia State lineup in all six games, recording 17 saves on the season.

After a 6-2-0 record to start the season, the Mountaineers will host their seventh in nine matches in the confines of their own Ted Mackorell Soccer Complex. App State has held a strong resolve at home, tallying a 5-1 record.

Leading the team in points and goals is sophomore forward Kelan Swales. The England native has netted three goals and one assist in only three starts for the Mountaineers, leading the team with seven points on the season. Both Zeiko Harris and Nick Rogers follow the lead with two goals apiece for the side from Boone.

As such as the Georgia State keeper, redshirt freshman Jacob Madden has been an ever-present at the goalkeeper position for ASU, recording a .818 save percentage while collecting 27 saves on the season, allowing just six goals this year.

Saturday’s matchup between the Bucs and Panthers will be the first in series history. The two sides have both taken on UNC Asheville, the only common opponent to this point on the schedule. The Bucs went to Asheville to grab a 2-0 win in the opening game of their preseason, schedule, while the Panthers and Bulldogs fought to a 2-2 draw in double overtime in North Carolina in the third game of the season.

A more familiar foe in App State, the Bucs are on the wrong side of a narrow 5-4 series advantage for the Mountaineers. The positive news for the Bucs, however, is they hold a 3-2 advantage when heading to Boone in matchups between the two. The Bucs have slowly been turning the series around, winning the last three contests all by a 1-0 margin.