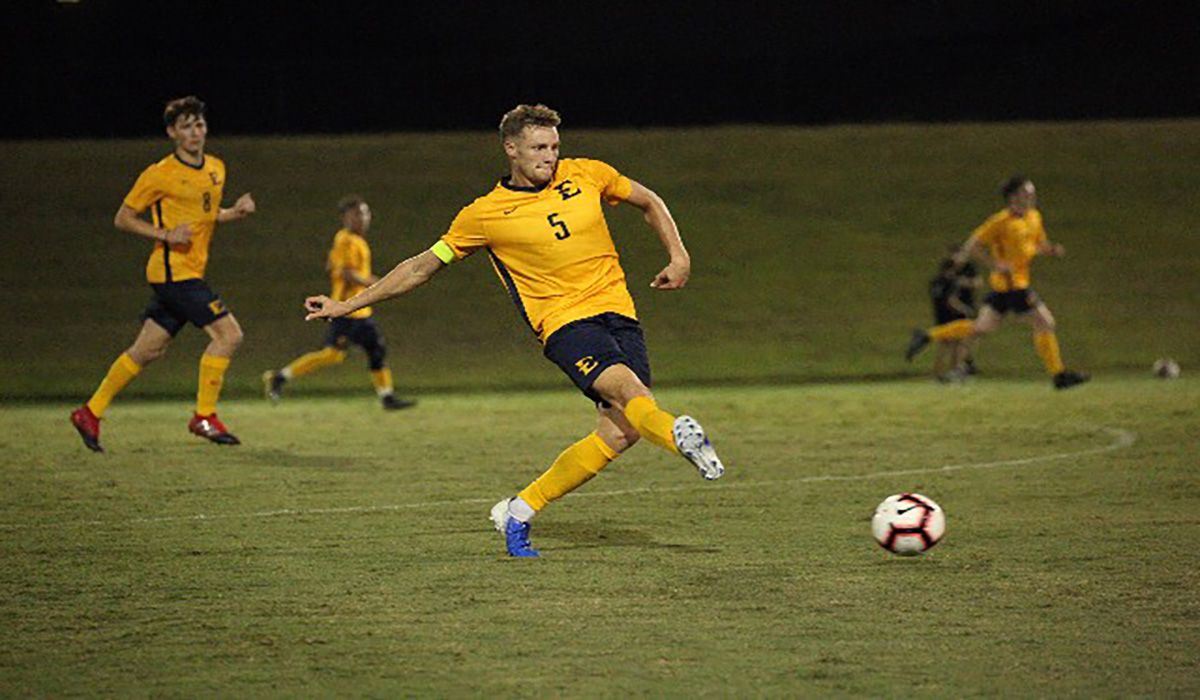 JOHNSON CITY, Tenn. (Sept. 28, 2019) – In a game of ups and downs, both ETSU and Georgia State entertained a Summers-Taylor Stadium crowd in a 2-2 slugfest Saturday night in Johnson City. The Bucs move to 3-3-1 on the year while the Panthers remain unbeaten at 4-0-3.

Despite chances between the sides coming few and far between, the Bucs dominated possession in the early going as the home side always looked like the more threatening side to get on the board. That reflected on the scoreboard as well, owning a 5-0 advantage in shots in the opening 45 minutes of action.

The best chance of the first half came through Kieran Richards (Hamilton, New Zealand). The freshman drove to the edge of the area and faked a shot on his right foot and cut it to his left side. Richards struck a clean effort on frame, being matched by Panther goalkeeper Paul Tyson to keep the score level where it would remain heading into the second half.

The second half turned into the complete opposite of the first as both teams combined to triple the amount of shots of the first half. In their first real threat on goal, the Panthers opened the scoring on the evening through Aris Briggs. Briggs, who came into the evening third in the NCAA for goals, tallied his ninth of the season as he was the first to a rebound off an initial Josh Perryman (Sheffield, England) save.

Despite the Bucs coming out on the other side of the goal with another foothold on the game in chances and possession, Georgia State eventually doubled their lead in the 78th minute. After a turnover in the defensive third from the Bucs, Frank Rosenwald picked up the loose ball and turned on goal, rifling a shot out of the reach of Perryman to double the Panther advantage.

The Bucs thought they had their equalizer in the 82nd minute after a loose ball in the Panther penalty area fell to the foot of Bruno Andrade (Sao Paulo, Brazil). The senior lashed on to the effort and cannoned it off of the crossbar, shooting straight down on the goal line before bouncing out as the rebound went crashing out for a Buccaneer corner.

Just two minutes later, the Buccaneers finally found a breakthrough with a pair of freshman. Craftily moving in the box, Gilly Miller (London, England) felt a challenge and crashed to the ground, earning a penalty for his side. Without hesitation, Richards stepped up to take the shot, his second penalty shot of the season. Just like his first, Richards sent the keeper the wrong way and netted the chance (3rd of the season), racing to collect the ball and go on for an equalizer.

That equalizer found its way through in the 90th minute with only 40 seconds on the clock. After breaking down the right side, Miller again found his way in to the opposing penalty area. Shifting it out wide, Philip Hildebrandt (Charlottenlund, Denmark) raced onto it and sent a driven cross into the box. Joe Pickering (East Sussex, England) met the effort with one touch, lasering a side-footed volley into the bottom right corner that sent Summers-Taylor Stadium into a frenzy as the scoreboard showed level between both sides after the 90 minutes. Pickering’s strike marked his first of the season and the fifth of the defender’s career donning ETSU colors.

Neither side were able to take full advantage of the 20 minutes of extra time, the Bucs unable to convert on their 3-1 advantage in opportunities in the overtime period. ETSU settled for their first draw of the season, but in circumstances a draw that could be considered a victory for David Casper’s side after being nearly down and out with six minutes left.

The Blue and Gold logged a 20-5 advantage in shots on the night, forcing Tyson into seven saves on the evening. Perryman recorded two saves in the contest after his 270 minutes without allowing a goal came to a close. Richards led the offense with six shots, five on goal, while Andrade followed with five shots on the night.

ETSU returns to action on Tuesday, October 1st as it makes the short trip to Boone, N.C. to take on Appalachian State in a 7 p.m. kickoff.