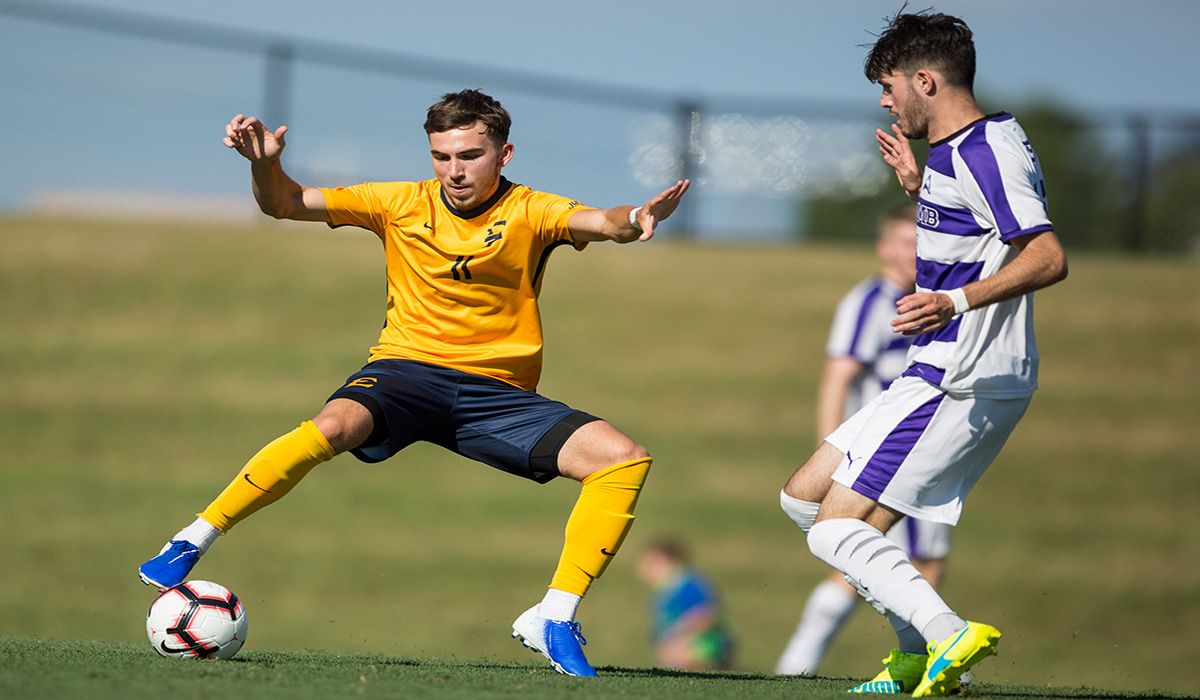 BOONE, N.C. (Oct. 1, 2019) – For the second straight time, the ETSU men’s soccer team received late game heroics to send their match into extra time and came out on the other side with a draw. The Bucs played the Mountaineers of Appalachian State to a 2-2 draw at Appalachian Soccer Stadium on Tuesday evening, moving their season mark to 3-3-2. App State collected their first draw of the season, moving to 6-2-1.

The Bucs grabbed the best chance in the early goings of the contest. After a Mountaineer foul, ETSU almost opened their account through Merveil Bilomba (Tours, France). The defender sent his header off the crossbar before Appalachian State cleared out of danger.

Kieran Richards (Hamilton, New Zealand) almost buried a chance as well in the 32nd minute as a Mountaineer defender scrambled the ball away to earn a team save. Despite the opportunities, it was the Mountaineers that opened the scoring on a low driven strike in the bottom left corner, proving the difference between the two in the opening 45 minutes.

The Buccaneers looked to get back level early and often in the second half. The stingy Mountaineer defense held well to try and maintain their fifth shutout of the season. App State eventually dropped numbers deeper to try and get more defenders behind the ball, allowing ETSU to outshoot them 11-8 in the second half.

It was the 11th shot that provided the breakthrough for ETSU behind the foot of Gilly Miller (London, England). Bruno Andrade (Sao Paulo, Brazil) looked to get a last cross into the box from the byline after a Mountaineer foul. The ball scrambled in the box before a clearance fell to Miller at the top of the area. The freshman lashed his right foot onto the ball and it snuck through a host of defenders before beating the keeper to his left with just under 30 seconds left in the game. It was the second time in two games that the Bucs left it late to equalize and send a match into extras, as Joe Pickering’s (East Sussex) right footed volley found the bottom corner of the net in the previous match against Georgia State.

In similar fashion to the Georgia State game at Summers-Taylor Stadium last Saturday, the Buccaneers went into the two overtime periods and outshot their opponents. The Bucs held a 5-2 advantage but were unable to find a winner, and for the second straight time ETSU clawed their way back for a draw. The tie extends the Bucs unbeaten streak to four consecutive games, holding a 2-0-2 record in the streak.

The Bucs held a 22-16 advantage in shots over the course of 110 minutes of action, forcing the Mountaineer keeper into eight saves. Richards led the offense in shots with five, while both Richards and Miller put two efforts on target. Josh Perryman (Sheffield, England) collected five saves on the evening. Both sides massed 19 fouls apiece in the chippy affair.

ETSU returns to action on Saturday, October 5th. The Bucs host the Kentucky Wildcats, who come into the matchup as the 19th rated team in the country. Kickoff is slated for 7:30 p.m. at Summers-Taylor Stadium.