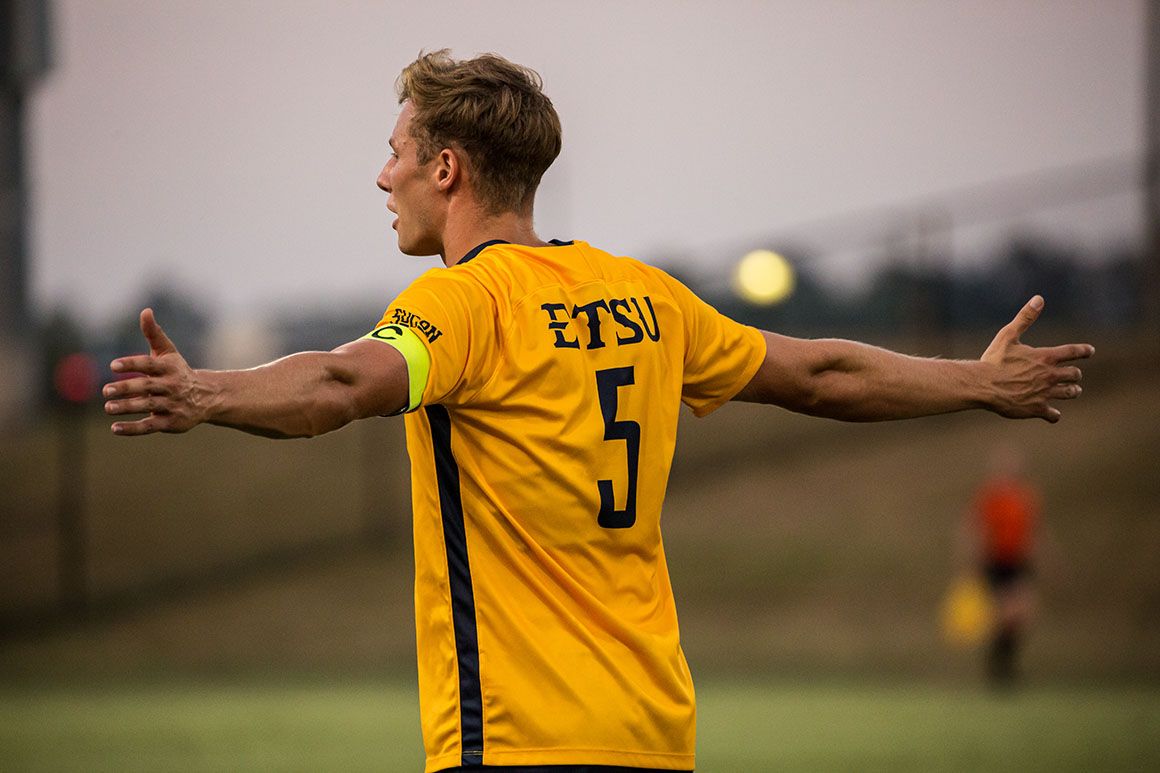 Bucs Open Their SoCon Campaign on the Road at Furman
ETSU at Furman | October 12, 2019

GREENVILLE, S.C. (Oct. 11, 2019) – The ETSU men’s soccer team opens their SoCon schedule this weekend, taking on the Furman Paladins in a road match on Saturday evening at Stone Soccer Stadium. It is the fifth time in their six years back in the conference that the Bucs start their conference campaign away from Summers-Taylor Stadium.

The Bucs offense stalled out in a road battle against a ranked NC State side on Tuesday as the lone goal from the Wolfpack was enough to see them past ETSU. Both teams struggled to get much of an offense established all night, NC State outshooting the Bucs just 7-5 on the evening. However, none of the five Buccaneer attempts threatened the Wolfpack net as the hosts walked off the field after 90 minutes with enough to give them a victory.

The matchup with the Wolfpack will be broadcasted on ACC Network Extra. Live stats will be provided to follow along to the minute during the contest.

The Bucs enter the SoCon portion of the schedule with just one game of non-conference remaining, taking on Davidson next Tuesday. Entering this weekend’s contest with a 3-5-2 record, the Bucs sit right in the middle of the conference in goals scored with 12. 10 of the 12 goals have come from freshmen, as Hauk Andreas Fossen (Moelv, Norway) leads the team with four goals. Rookie counterpart Kieran Richards (Hamilton, New Zealand) is tied for the lead on the team in points, adding two assists to his three goals on the year.

The Bucs recently fell on the wrong side of contests against ranked opponents. #19 Kentucky came to Summers-Taylor and grabbed a 1-0 victory in the rain before #22 NC State hosted the Bucs and escaped with another 1-0 result with only 12 shots combined. ETSU grabbed their two draws prior to the Kentucky match, using a 90th minute goal from Gilly Miller (London, England) and Joe Pickering (East Sussex, England) to extend games against Appalachian State and Georgia State respectively, settling for a point in each of those games.

Earning a SoCon Defensive Player of the Week nod earlier in the year, Josh Perryman (Sheffield, England) has been nearly an ever present in the Buccaneer goal, playing all but four minutes of the season so far. Fossen joined Perryman to sweep the conference awards with the SoCon Offensive Player of the Week with his brace against High Point, while Pickering also received SoCon DPOTW honors this season.

Despite ranking as the number one offense heading into SoCon play, scoring 2.08 goals per game, the Paladin defense has seen their fair share of struggles as well. Furman ranks second to last in goals allowed, conceding 23 goals compared to the Bucs’ 13. Their high powered offense has been enough to start them on a 6-5-1 non-conference record however, snapping a three-game losing streak with a 4-1 win over North Greenville on Tuesday.

Furman is lead offensively by Cole McLagan, who is second in the conference in points with 13. His six goals also ranks second in the SoCon, while teammate Connor Sloan and Emery May hold third place and a tie for fourth in points as well. Sloan comes into the game with three goals and five assists while May has also scored three goals, creating three assists as well.

The Paladins have used two goalkeepers on the season, with Max Fisher getting the majority of time in the net with nine games played and eight starts. Fisher holds a 4-3-0 record in net, credited with 23 saves with just a .575 save percentage.

The Paladins hold the upper hand in the series with a 7-2-6 series lead. Furman swept the Bucs last season with a 2-0 regular season win and a 2-1 victory in the SoCon championship. Prior to last year, the Bucs and Paladins played part in four consecutive draws between the two sides.