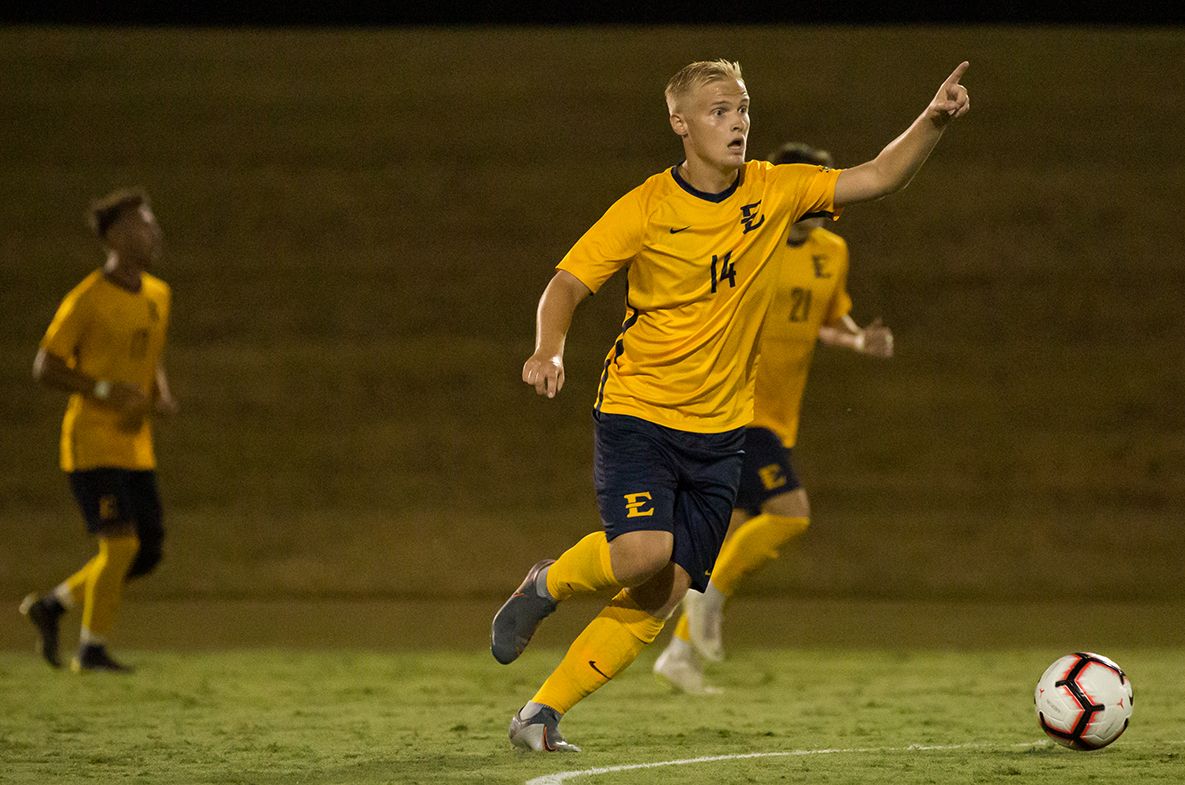 CHARLOTTE, N.C. (Oct. 15, 2019) – In the non-conference finale Tuesday night in Charlotte, the ETSU men’s soccer team entered the remainder of SoCon action on a high after knocking off a Davidson side in a 2-1 scoreline at Alumni Soccer Stadium. The win moved the Bucs to 4-6-2 on the season while the Wildcats wrapped up their tough non-conference matchup with a 2-8-2 record.

For the first time in the 2019 season, Josh Perryman (Sheffield, England) did not lace up in the Buccaneer goal against the Wildcats, as redshirt freshman Quinten Mitchell (Greeneville, Tenn.) received his debut for the Bucs in relief of last year’s Second Team All-SoCon selection, allowing vital rest for the upcoming conference schedule.

Despite a fresh face in goal, the Wildcat keeper became the focal point of the match in the early portion of the first half. Sawyer Gaffney received the call early and often, the Bucs tagging five shots and four corner kicks in the opening 12 minutes of the game.

The early pressure provided a breakthrough as ETSU opened the scoring in the 23rd minute. After a Davidson foul, Bradley Empson (London, England) collected the ball to take the free kick. The freshman found his rookie counterpart Hauk Andreas Fossen (Moelv, Norway) as the Norwegian’s header hit off a defender before falling at his feet, poking home the goal to break their scoring drought of over 270 minutes of action.

After seeing the ball hit the back of the net, the Buccaneers made it a second in as many minutes through the right boot of Gilly Miller (London, England). The freshman did well to work his way in the box, showing his craftiness as he forced a lunge from a Wildcat defender. The quick feet of Miller dragged the ball away, forcing the contact to go into his body and being brought down as the ref pointed immediately to the penalty spot. Miller placed the ball on the 12 yard marker and slotted it to the left netting to double the Buccaneer advantage under a half hour into the game.

The Bucs took their 2-0 lead into the break, outshooting the Wildcats by a 10-1 margin. Mitchell spent the first 45 minutes of his debut unchallenged, the lone Davidson shot not threatening the Tennessee native’s net.

The home side came out the second half on a more aggressive note, doubling their shot total just over a minute onto the second half. Unable to create any offense on their own, the Bucs conceded three straight shots before the hosts cut into the Buccaneer lead. Jaylen Thompson was first to a Justin Stone cross, the attacker extending for the finish, deflecting off of Mitchell and into the back of the net in the 63rd minute.

The Buccaneer defense tightened up the rest of the way, outshooting the Wildcats 4-3 while not allowing a single shot on goal in the final 30 minutes as ETSU finished their tough and travel-heavy non-conference schedule on a bright note.

Along with his game-winning goal, Miller led the Buccaneer offense with four shots on the night. Empson tagged three shots along with his assist while Fossen and Joe Pickering (East Sussex, England) finished the night with two shots, the former with the opening goal. Mitchell got the debut in his opening match while seeing his Buccaneer side outshoot the Wildcats 14-7, holding a 6-2 advantage in corners.

The Bucs head on the road for their fifth game in seven matches on Saturday afternoon, continuing their SoCon play against VMI in a noon kickoff.