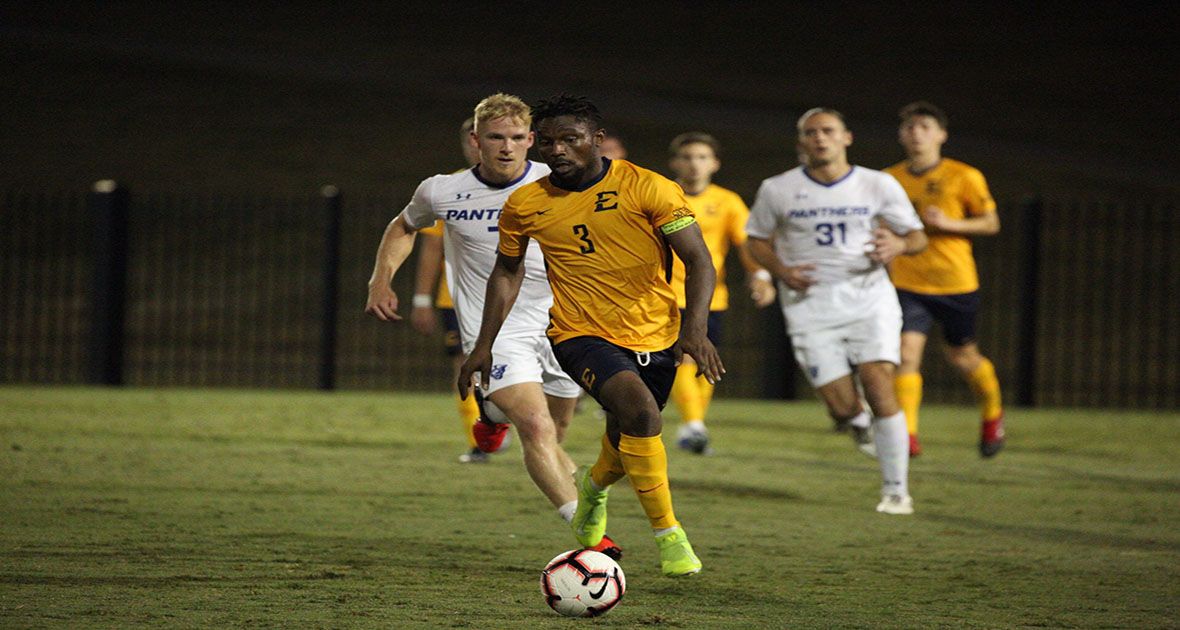 Bucs and Bears Clash at Summers-Taylor
Mercer at ETSU | October 22, 2019

JOHNSON CITY, Tenn. (Oct. 21, 2019) – The ETSU men’s soccer team enters Tuesday’s contest on a two-game winning streak when they take on Mercer in the confines of Summers-Taylor, hosting the Bears in the 7 p.m. matchup.

Coming off their first win in five contests, the Bucs enter the matchup with Mercer with momentum, securing their second on the bounce with a 3-0 shutout over conference foes VMI last Saturday. Hauk Andreas Fossen (Moelv, Norway), Kieran Richards (Hamilton, New Zealand) and Jeremiah Edouard (Pompano Beach, Fla.) got off the mark in the win, while Josh Perryman (Sheffield, England) secured his third shutout of the season.

Play-by-play commentator Mike Gallagher will be on the call for Tuesday’s matchup on ESPN+. Live stats will be provided to follow along to the minute during the contest.

The Bucs finally find their way back to Summers-Taylor Stadium, playing their first home game since meeting then ranked #19 Kentucky in a competitive affair. Since then, the Bucs have been on a four-game road stretch and five away matches in their last seven, including a ranked NC State team and a Furman side on top of the SoCon standings.

The Bucs sit in a two-way tie for fourth in the conference in goals scored with 17. 15 of the 14 goals have come from freshmen, as Hauk Andreas Fossen (Moelv, Norway) leads the team with six goals, surpassing the all-time freshman school record for goals in a season with his mark against Davidson. Rookie counterpart Kieran Richards (Hamilton, New Zealand) is second on the team in points, adding two assists to his four goals on the year. The two rippled the net again against VMI, as rookie Jeremiah Edouard (Pompano Beach, Fla.) grabbed his first goal of his collegiate career in the 3-0 win.

Simon Chretian (Christchurch, New Zealand) and Bradley Empson (London, England) have been integral in the connection between the defense in the attack over the course of the season, while Gilly Miller (London, England) and Richards have provided creativity from the attacking midfield role, combining for seven goals and three assists between the two.

Despite an injury-plagued defense, the Bucs have shown strength in depth as they lead the Southern Conference in a variety of defensive statistics. The Bucs sit on top with three other teams with three shutouts, separating themselves as the leaders in goals allowed (15) and goals allowed average (1.10). Leading the way for the Bucs defense, captain Merveil Bilomba (Tours, France) is one of three Bucs to start in all 13 matches this year. Austin Bihlmeyer (Knoxville, Tenn.) has been a consistent presence on the left side of defense, while both Joe Pickering (East Sussex) and John Lucchesi (Johnson City, Tenn.) have fought off injuries through portions of the season. Freshmen Phillip Hildebrandt (Charlottenlund, Denmark) and Cameron Carroll (Clarksville, Tenn.) have provided depth along the wide defensive roles.

Earning a SoCon Defensive Player of the Week nod earlier in the year, Josh Perryman (Sheffield, England) has been nearly an ever present in the Buccaneer goal, playing all but 94 minutes of the season so far. Fossen joined Perryman to sweep the conference awards with the SoCon Offensive Player of the Week with his brace against High Point, while Pickering also received SoCon DPOTW honors this season.

Entering the showdown with an 8-4 record, the Bears come off an overtime defeat to Wofford in their last time out in Spartanburg, falling in 3-2 overtime thriller to the Terriers. Mercer enters the game with a 0-1 record in the SoCon, their home game with Belmont this past Saturday being postponed to a later date.

Offensively, the Bears are led by the top scorer and assister in the Southern Conference in Trevor Martineau. The Canadian forward has tallied eight goals and eight assists in his sophomore season. Four other Bears have tallied multiple goals on the year, Leo Toledo (3G, 3A) and Dylan Gaither (3G, 2A) following Martineau in offensive production.

JR DeRose has held down the Mercer net in all 12 matches to this point on the 2019 campaign. DeRose ranks fourth in the conference with 37 saves, tallying a .698 save percentage with his three shutouts.

The Bucs have recently turned the tide in the series history despite an overall 8-6-5 lead in Mercer’s favor. In the last seven meetings, the Bucs have a 4-0-3 record over the Bears while only conceding three goals. Despite the record, the Bears have had the upper hand on postseason play, as two of the three draws went in the favor of Mercer after penalties were needed to separate the sides.