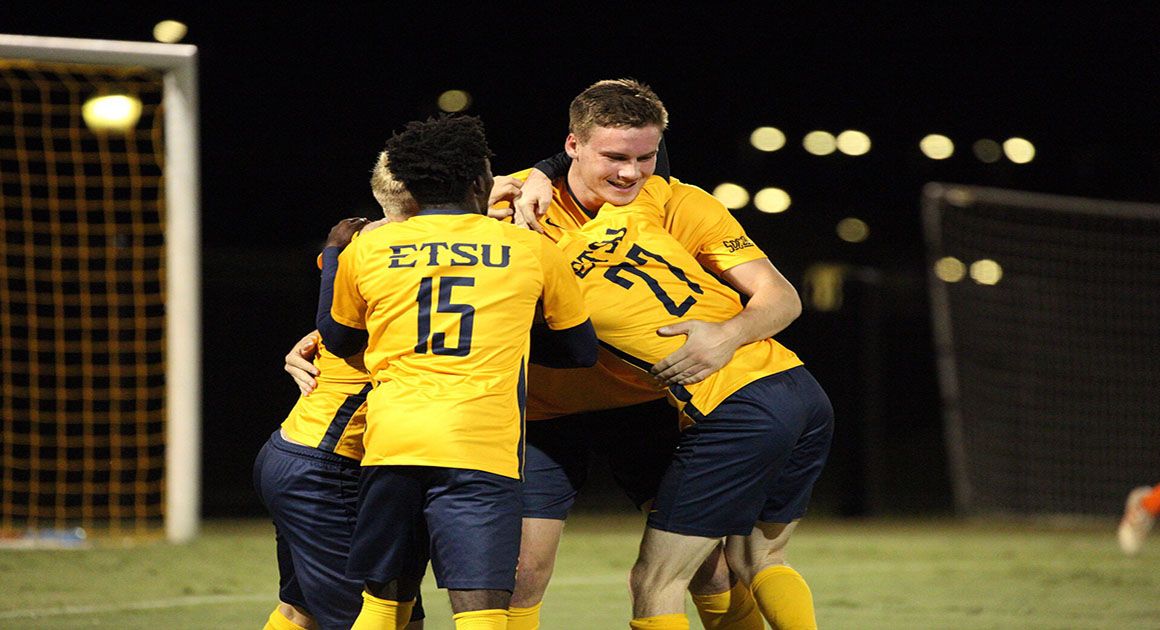 JOHNSON CITY, Tenn. (Oct. 22, 2019) – Hauk Andreas Fossen’s (Moelv, Norway) seventh goal of the season paved the way for ETSU men’s soccer and their 2-0 clean sheet over the Mercer Bears on Tuesday evening. Fossen scored in his third consecutive game, grabbing the opener in all three matches. Kieran Richards (Hamilton, New Zealand) joined the scoring as the Bucs shoot up the conference standings with their second consecutive conference win and clean sheet.

Mercer took no time to get their offense started in the contest, grabbing two shots in the first seven minutes and the first three shots of the contest overall.

While waiting nearly 20 minutes for the opening shot of the contest for the Bucs, it was one well worth the wait. After forcing a corner down the sideline, ETSU opened the scoring the same way they opened it against VMI on Saturday. Bradley Empson (London, England) whipped in his corner into a dangerous area with the Bear keeper and Hauk Andreas Fossen (Moelv, Norway) leaping up for it. The freshman poacher got enough lift, deflecting the set piece into the far netting as the Bucs took the lead.

Kieran Richards (Hamilton, New Zealand) almost doubled the advantage in the 40th minute, wiggling through the Mercer defense before setting himself up for an attempt inside the box. Not getting the cleanest hit out of his left foot, JR DeRose dove to his left and recorded his first save of the afternoon.

Richards needed just one more attempt three minutes later to double the Buccaneer lead. After Josh Salinas (Stafford, Va.) played Philip Hildebrandt (Charlottenlund, Denmark) down towards the touchline before the freshman defender whipped in a low cross along the ground. Unable to clear the ball in defense, Richards beat the Mercer defense and tapped home the goal en route to his fifth goal on the year and his second straight game.

Despite the two goals, both teams were unable to unlock the defense as both sides were able to only generate three chances apiece.

The second half generated more chances from both sides, a combined 21 shots being attempted throughout the half. Outshot 12-9 in the second half, ETSU made the most of their chances by putting more opportunities on frame.

The Bucs almost found a third through Richard’s second of the evening but saw the attempt denied by the frame of the goal. The freshman drove down the left side and took a speculative effort from nearly 20 yards out and just feet away from the touchline, the ball knuckling through the air before crashing off the crossbar as Mercer escaped a three goal deficit.

However, the Bucs defense gave no chance for the Bears to climb back into the game. The backline allowed just two chances in the final 10 minutes, neither threatening the Buccaneer goal.

The Bucs are back in Summers-Taylor Stadium on Saturday as they host UNCG in another SoCon showdown. The scheduled “White Out” game is set for 7 p.m.