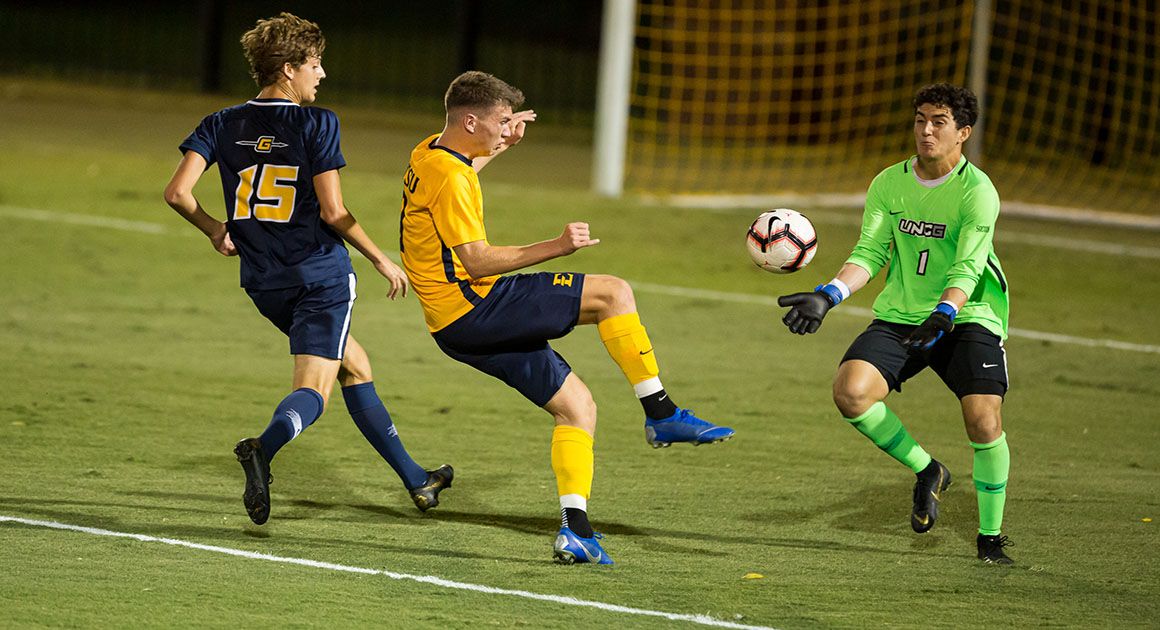 JOHNSON CITY, Tenn. (Oct. 26, 2019) – After 294 minutes without a goal conceded by the Buccaneer defense, ETSU was undone by a late winner to fall in a SoCon matchup against the UNC Greensboro Spartans 1-0 on Saturday evening at Summers-Taylor Stadium. The result drops the Bucs to 6-7-2 (2-2-0 SoCon) on the year while UNCG sits at 6-8-1 (4-1-0 SoCon) to distance themselves in the top two of the standings.

The Bucs entered the match without their main forward up front, as Hauk Andreas Fossen (Moelv, Norway) was forced to watch from the sidelines due to a suspension from yellow card accumulation. Fossen has scored in his last three matches dating back to the 2-1 win over Davidson.

Despite an early save by Josh Perryman (Sheffield, England) in the fourth minute of play, both sides were unable to unlock the opposing defense and create any threatening chances. ETSU’s best chance of the half came through Kieran Richards (Hamilton, New Zealand), who weaved his way into the box and taking one too many touches as a Spartan defender’s last ditch tackle prevented the freshman from burying his shot from 10 yards out.

The Spartans entered the half with a 4-1 advantage in the shot count, each team grabbing one corner kick in the 45 minutes.

The second half started at a more frantic pace as both sides created a couple of chances while having two players sent to the referees book, Richards being one of them to grab a yellow.

With no effort finding its way into the back of the net, the Spartans received a boost with just over 10 minutes left as Richards committed a foul deemed late and the referee reached in his pocket for the second time for the Kiwi, this time picking out a red to send Richards off the pitch and ETSU down to 10 men.

UNCG capatilized on their man advantage, and in the 87th minute made the Bucs pay for their previous error. Faisal Almubaslat picked up a pass from the midfield just outside of the box, turning it onto his right and curling an effort past Perryman and into the far post as the away side celebrated with their team towards the near sideline.

The effort and man advantage proved too much to overcome as the Bucs were unable to generate a response and saw their three-game win streak fall in dramatic fashion.

The Spartans finished the match with a 11-6 advantage in shots, the Bucs unable to register a shot on goal throughout the 90 minutes. Luke Parker (Memphis, Tenn.) led the Bucs with three shots as Perryman finished his night in goal with three saves.

The Bucs look to avenge their loss when they travel to Belmont on Tuesday evening, taking on the Bruins in a 7:30 p.m. start time.