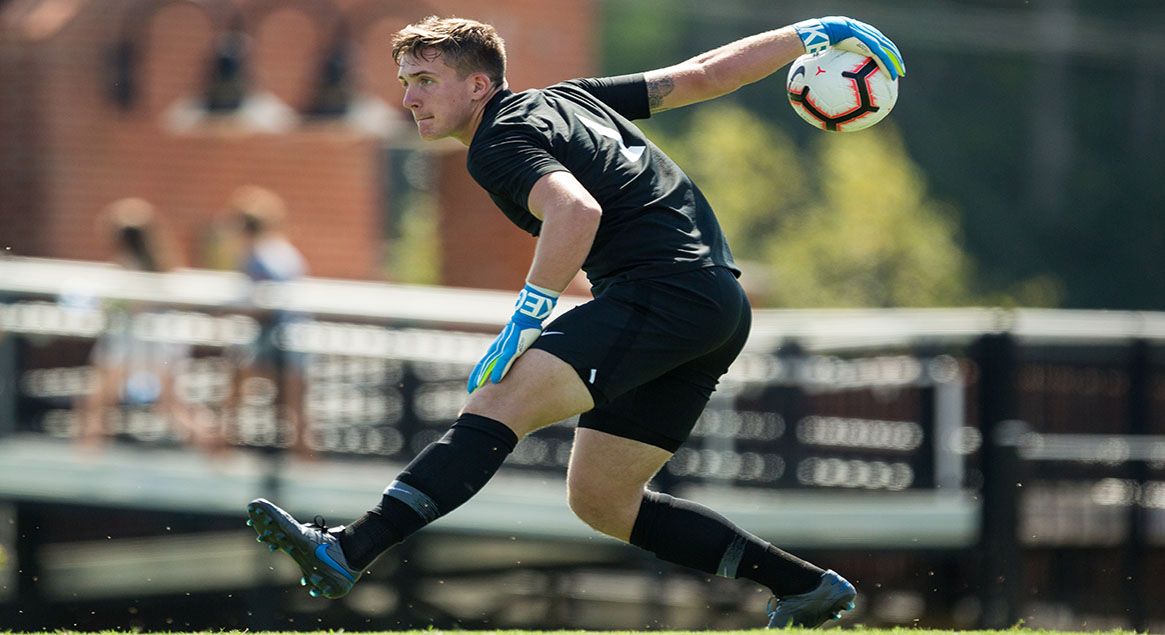 NASHVILLE, Tenn. (Oct. 29, 2019) – Despite a slow start to the match, the ETSU men’s soccer team grabbed a vital late goal from an unlikely hero in Dominic Foster (London, England) to see off the Belmont Bruins 1-0 in a double overtime SoCon contest in the battle of Volunteer State teams on Tuesday evening. The dramatic win shot the Bucs to 7-7-2 on the year with a 3-2 mark in conference play, while Belmont dropped to 3-9-2 and a 1-2-1 conference mark.

Just a minute into the game the Bruins called the Buccaneer defense into action, as Marius Svendsen forced Josh Perryman (Sheffield, England) into a save. Perryman received the call again in the 15th minute, answering to keep Belmont out of the back of the net.

The Bucs struggled to find the offense in the first half, mustering up only two shots while unable to put either effort on target. ETSU took a blow in the 30th minute, as Joe Pickering (East Sussex, England) walked off gingerly with an injury, placing freshman defender Dominic Foster into the Buccaneer backline for his season debut.

The best defense in the Southern Conference didn’t get out of rhythm and kept the visiting side in the game, holding Belmont out of the net as the Bucs tried to improve on their league best 16 goals allowed and four shutouts in the conference, entering the half at a 0-0 draw. Belmont outshot ETSU 6-2 in the first half with a 3-1 advantage in corners.

The Bucs defense entered the second half even more impressive than the first, holding the Bruins to just one shot in the opening 35 minutes of the half. Like the first period, the ETSU offense remained unable to gather many opportunities on frame as Josh Denton (Knoxville, Tenn.) held the only opportunity on target as his header went comfortably into the hands of Cameron Petty.

After heading into the overtime at 0-0, Luke Parker (Memphis, Tenn.) nearly won the contest for the Bucs in the opening 20 seconds, arriving first to a ball won in the air by Lucas Lightner (Clarksville, Tenn.). The senior volleyed the effort and beat the keeper, but a Bruin defender flew his body into the shot and kept the ball out of the net to keep the result intact.

The pressure remained in favor with the Bucs, who got their reward in the second overtime period. After earning a corner kick, Bradley Empson (London, England) found fellow Englishman Foster for a perfect time to score his first goal of his collegiate career, heading home the effort with just five minutes to go in the game to send the Bucs back to Johnson City with a dramatic win and cap off a college debut with a goal and a shutout. The assist marked Empson's team-high fifth on the season, showing off his importance from set pieces yet again.

After trailing in shots, the Bucs held a 7-4 advantage after the halftime whistle, including four shots on goal. Four different Bucs tallied a shot on goal while Perryman finished the contest with five saves, registering the fifth clean sheet for ETSU.

The Bucs look to continue the momentum into Saturday, where ETSU will honor its seniors as they take on Wofford in the regular season finale at 7:30 p.m.