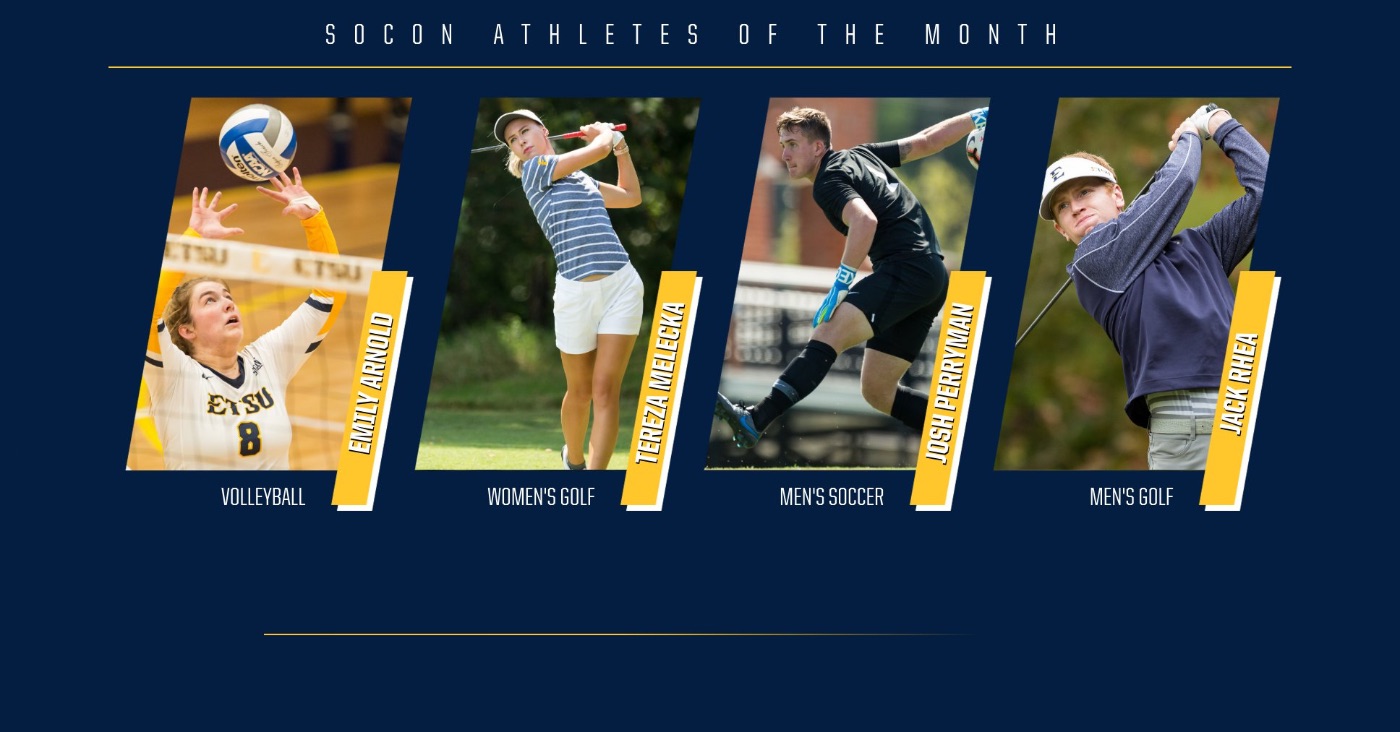 SPARTANBURG, S.C. (Nov. 1, 2019) -- The Southern Conference announced its Player of the Month awards for October on Friday afternoon and four Buccaneers received accolades.

Jack Rhea had a strong month for the Bucs, kicking off October with his first collegiate individual win in ETSU’s home event after a 15-under-par 201 performance in the Bank of Tennessee Intercollegiate. Rhea carded a second-round 63, tying teammate Shiso Go for the lowest round in tournament history, while also marking the lowest round of Rhea’s career. The individual win earned Rhea his first career SoCon Men’s Golfer of the Week Award. The following week, Rhea finished tied for 15th in a loaded field at the Golf Club of Georgia Collegiate after a score of 1-over-par 217. Rhea competed against nine Top 50 golfers and 12 Top 50 teams and was able to maintain his impressive fall season. Rhea laid claim to yet another SoCon weekly award for the second week in a row. Rhea capped his month by tying for ninth at the Hoakalei CC Collegiate Invitational in Hawaii, jumping 31 spots on the final day with a 7-under-par 65 to finish at 6-under-par 210 and help ETSU to the team win.

ETSU junior women’s golfer Tereza Melecka posted a pair of top-25 finishes in October, tying for 23rd at the Palmetto Intercollegiate on Oct. 13-15 before capping off the month by earning co-medalist honors at the Las Vegas Collegiate Showdown on Oct. 27-29. The Belcovice, Czech Republic, native was named the SoCon Golfer of the Week for her showing in Las Vegas, where she made a tremendous comeback on the final day to tie for the top spot individually. After firing rounds of 1-under-par and 1-over, she sat four strokes back of the leader heading into the final 18 holes. Melecka used six birdies, including back-to-back birdies on the final two holes, to propel her to a final round 4-under 68 and a share of the individual title. The win was Melecka’s second of her career and first of the season.

ETSU redshirt sophomore goalkeeper Josh Perryman proved tough to beat in the month of October, allowing just five goals in eight games during the month. The Sheffield, England, native turned in a goals against average of just 0.59 as he picked up three clean sheets. Perryman posted five saves on Oct. 1 in a 1-1 draw with Appalachian State, holding the Mountaineers to just one goal over 110 minutes of play. After making six saves in a 1-0 loss at Furman, Perryman closed the month with four strong outings, allowing just one goal over 376 minutes between the posts. He made two saves and shut out VMI on Oct. 19 and posted another shutout on Oct. 22 with four saves as the Bucs defeated Mercer 2-0. Perryman’s final outing saw him shut out Belmont in an overtime thriller, making five saves to pick up his third win of the month.

Arnold accumulated 335 assists throughout the month of October averaging 10.8 per set. The freshman setter was aggressive at the net, also recording 22 kills for a .396 hitting percentage. The Louisville, Ky. native set a career-high in the Bucs’ five-set win at Samford in the middle of the month with 59 helpers. Over the eight matches played, Arnold logged double-doubles against Chattanooga, Wofford and The Citadel. Against the Mocs, she had 38 assists and 10 digs. At home she logged 49 assists and 15 digs against the Terriers and 37 helpers and 11 digs against the Bulldogs