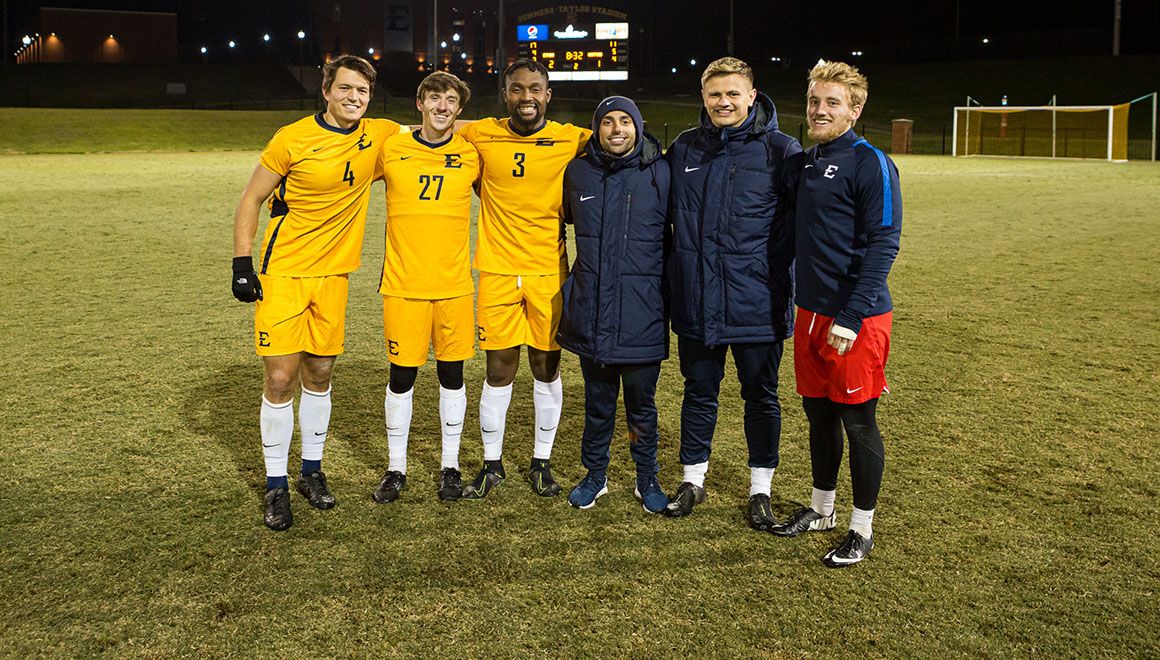 Kieran Richards scores a golden goal 1:28 into overtime to beat the Terriers 2-1

JOHNSON CITY, Tenn. (Nov. 2, 2019) – Needing overtime to decide the game for the second straight time, the ETSU men’s soccer team ousted the Wofford Terriers on Saturday night in the final game of the regular season via a golden goal strike from Kieran Richards (Hamilton, New Zealand) in the 92nd minute. The win capped off senior night in fashion as the Bucs honored the six veterans playing their last match in Summers-Taylor Stadium.

The Bucs took to the game right off the bat, recording four shots in the opening 10 minutes to try and send the homecoming crowd into an early frenzy. Outshooting the Terriers 6-2 in the first 20 minutes, ETSU struck blood first just two minutes later to open the scoring.

Senior Luke Parker (Memphis, Tenn.) picked up the ball in space at midfield and made a superb driving run through the middle of the Terrier defense. The wide man took on a shot that beat Wofford keeper Grant Wollam but slammed off the left post and into an oncoming Hauk Andreas Fossen (Moelv, Norway). The forward made no mistake tucking away the rebound from 12 yards out as the freshman finished for his team-high eighth goal on the season to give the Bucs an early advantage.

ETSU kept their foot on the pedal in the first half but were unable to double their advantage. The Bucs outshot the Terriers 13-4 in the first half, forcing Wollam into four saves. Only one of the four Wofford shots found their way on goal but not threatening enough as Josh Perryman (Sheffield, England) comfortably collected the attempt.

Coming out of the intermission, Wofford picked up the intensity and showed as the more dangerous side in the early stages. Their pressure paid off an hour into the match as Adrian Roseth made his way into the box and earned a penalty. Captain Lucas Altman stepped up to take the penalty and tucked his effort cleanly into the bottom left corner to bring the Terriers right back into the game.

Wofford continued their pressure and looked the more likely of the two sides to find a second goal before both sides eventually settled for a 1-1 score line after 90 minutes, sending the Bucs into their second straight and fifth overall overtime game this season. ETSU entered the night 2-0-2 on the year when playing more than the 90 minutes.

The Blue and Gold continued their strong overtime record, needing just 90 seconds of the first period of extra time to find the game winner. After some interchange at the top of the box, Lucas Lightner (Clarksville, Tenn.) found Kieran Richards (Hamilton, New Zealand) on the edge of the area. The freshman midfielder took the pass in stride, played two touches to his right before rifling a shot to his left that beat Wollam and found the corner netting, sending Summers-Taylor into another frenzy as the Buccaneer players stormed the field. Richards netted his sixth goal of the season as ETSU sent out the seniors in golden fashion to a 2-1 overtime win.

The Bucs outshot the Terriers on the night 17-11, including a 7-5 advantage in shots on goal. Perryman finished the afternoon with four saves. Parker led the offense with five shots as Richards and Fossen both had three efforts on the evening. Merveil Bilomba (Tours, France) recorded a near goal in the first half, beating the Terrier keeper but the Wofford defense cleared the effort off the line.

The win tonight secured the third seed for the Bucs in the upcoming SoCon Tournament, where they will face the winner of Belmont and VMI. The action is scheduled to take place on the site of UNCG, facing the Bruin-Keydet winner in a 1 p.m. kickoff on Friday afternoon.