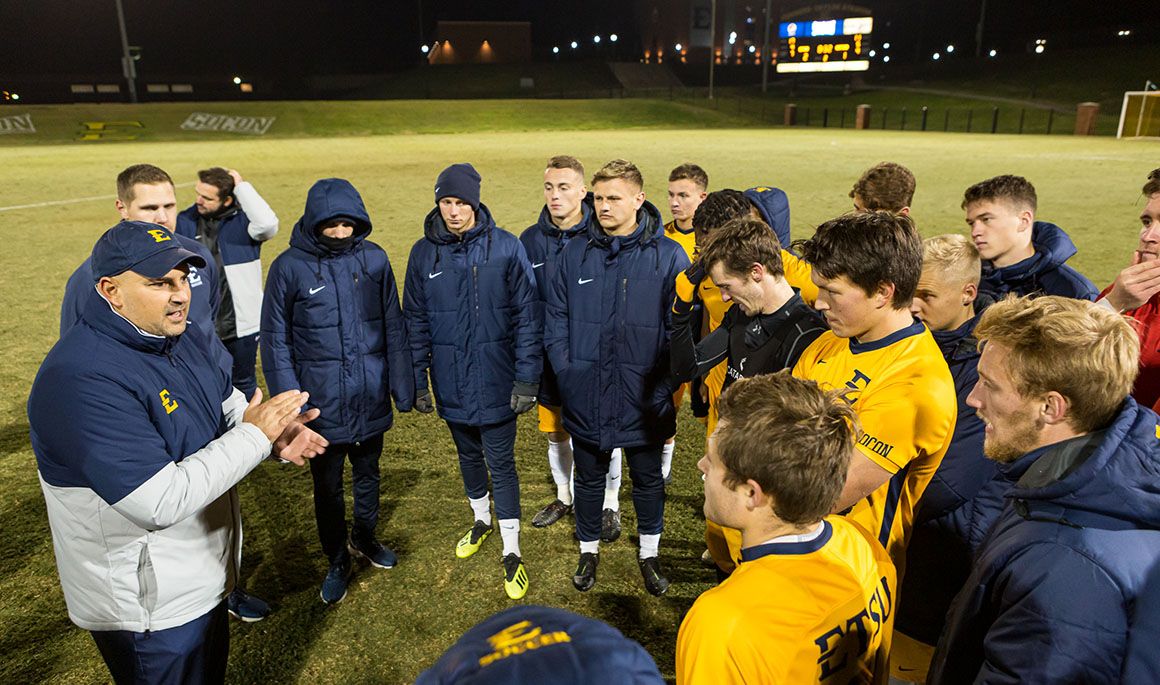 GREENSBORO, N.C. (Nov. 7, 2019) – ETSU looks to duplicate results earlier in the season when the Bucs travel to Greensboro to take on the Belmont Bruins in postseason action on Friday afternoon at 1 p.m. The two sides faced each other in ETSU’s second last game of the regular season, the Bucs leaving with a late decider in double overtime to take the spoils. With the #2 seed, UNCG plays host to both the quarterfinal and semifinal matchup should the Bucs advance.

Putting early pressure on the Wofford Terriers on senior night at Summers-Taylor Stadium last Saturday, the Bucs were rewarded when Luke Parker (Memphis, Tenn.) struck the post and rebounded to the foot of Hauk Andreas Fossen (Moelv, Norway). The freshman caressed the ball into the back of the net to take a lead with just over 20 minutes on the board. The Terriers responded on the hour mark, earning a penalty and converting it coolly to the bottom corner to equalize and eventually send the game to overtime. The Bucs needed just 1:28 in the first overtime to celebrate the seniors’ last home game as Kieran Richards (Hamilton, New Zealand) struck from outside the area low and into the bottom left corner to grab the game winner.

A SoCon Digital stream will be available for the contest as Spencer Turkin takes the call. Live stats will be provided to follow along to the minute during the contest.

The Bucs ended the regular season in fifth in the conference in goals scored with 22. 20 of the 22 goals have come from freshmen, as Hauk Andreas Fossen (Moelv, Norway) leads the team with eight goals, doubling the all-time freshman school record for goals in a season with his mark against Wofford while tying for second in the conference in goals scored. Rookie counterpart Kieran Richards (Hamilton, New Zealand) joins Fossen in breaking the school record, and is second on the team in points, adding two assists to his six goals on the year. Fossen’s enters the quarterfinal matchup having scored in three of the last four games.

Simon Chretian (Christchurch, New Zealand) and Bradley Empson (London, England) have been integral in the connection between the defense in the attack over the course of the season, Empson also leading the team in assists with five through his set piece taking role. Gilly Miller (London, England) and Richards have provided creativity from the attacking midfield role, combining for eight goals and three assists between the two. Jeremiah Edouard (Pompano Beach, Fla.) grabbed his first goal of his collegiate career in the 3-0 win against VMI.

Despite an injury-plagued defense, including two center backs picking up knocks on Tuesday, the Bucs have shown strength in depth as they lead the Southern Conference in a variety of defensive statistics. The Bucs sit on top with UNCG with five shutouts recorded by each of them. The Bucs have begun separating themselves as the leaders in goals allowed (16) and goals allowed average (0.95). Leading the way for the Bucs defense, captain Merveil Bilomba (Tours, France) has started and played in 16 matches of 17 this year. Austin Bihlmeyer (Knoxville, Tenn.) has been a consistent presence on the left side of defense, while both Joe Pickering (East Sussex) and John Lucchesi (Johnson City, Tenn.) have fought off injuries through portions of the season. Freshmen Phillip Hildebrandt (Charlottenlund, Denmark) leads the outfield player in minutes played in his right back role, while rookie counterpart Cameron Carroll (Clarksville, Tenn.) have provided depth along the wide defensive roles. Dominic Foster (London, England) made his mark in his only appearance on the season, pitching 90 minutes of a shutout and the game winning goal in the double overtime win against the Bruins the first time around.

Earning a SoCon Defensive Player of the Week nod earlier in the year, Josh Perryman (Sheffield, England) has been nearly an ever present in the Buccaneer goal, playing all but 94 minutes of the season so far. Perryman ranks second in the SoCon in saves with 59 while holding a .50 advantage on the next closest keeper in save percentage with a .787. Fossen joined Perryman to sweep the conference awards with the SoCon Offensive Player of the Week with his brace against High Point, while Pickering and Bilomba also received SoCon DPOTW honors this season.

The Bruins enter the matchup sixth in the final SoCon standings, knocking off VMI in the first round of the Southern Conference Tournament with a 4-0 margin to cruise to the quarterfinal match against ETSU.

In 17 games, the Bruins have scored just 23 goals, ranking sixth in the conference at season’s end. Belmont has provided 21 assists to their 23 goals while creating 66 corner opportunities. The Bruin defense sits in the middle of the SoCon standings, allowing 30 goals over the course of the season, 1.70 per game.

The Bruins enter the match with one of the most effective strikers in the conference. Niccolo Dagnoni has scored seven goals and five assists on the year, good for second in the SoCon in points as well fifth in goals scored. Dagnoni ranks tied sixth in assists with his five while Jordan Dozzi has four assists for the Bruins, good for a T-9th mark in the conference.

Nicolo Dini has safeguarded the Bruin net in 10 appearances, ranking fifth in the conference in save percentage at a .672 clip. Dini ranks fourth in saves in the SoCon, collecting 39 in 10 appearances, a 3.90 save mark per game that ranks second in conference. Cameron Petty has received seven nods in goal, holding a .656 save percentage while recording 21 saves. Petty has allowed 1.53 goals per game on the season.

Last season marked the first time in seven years the two teams collided, the Bucs earning a 2-1 win at Summers-Taylor. Over the course of the history, the Bucs hold a 4-2 series advantage over the Bruins despite a 2-2 record on the road, including this season’s 1-0 win against Belmont.