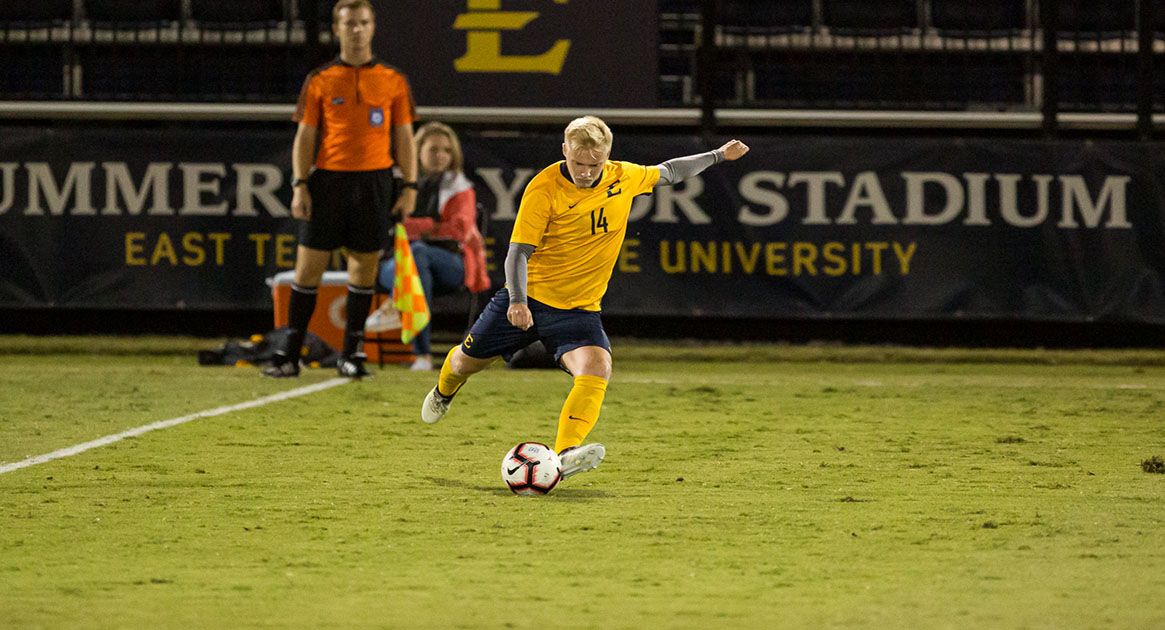 GREENSBORO, N.C. (Nov. 8, 2019) – #6 Belmont played spoilers over the #3 ETSU men’s soccer team on Friday afternoon, grabbing a 2-0 win over the Bucs to knock them out of the Southern Conference Tournament in the quarterfinals in Greensboro.

The Bruins and Bucs traded shots in the opening 15 minutes, each tallying three total shots along with a solo shot on target. Despite Kieran Richards’ (Hamilton, New Zealand) shot getting saved by Bruins keeper Cameron Petty, the Belmont side opened with a goal on their first shot on target through Jack Shaw. Jordan Dozzi and Niccolo Dagnoni interchanged beautifully before sliding a low cross to the foot of an oncoming Shaw who had no troubles to tap in to the Buccaneer net and open the scoring for the Bruin side.

Needing a goal to get back into the game, the Bucs couldn’t establish possession and rhythm in the attacking third, unable to generate a shot again until the 45th minute when Richards flashed a shot across the face of the goal and out for a goal kick.

Belmont ended the first half with a 6-4 advantage in shots along with their goal, recording two corners compared to the Bucs’ one. Each side had one save going into the halftime break.

ETSU came out of the second half with an early chance at an equalizer through Jordan Broadwater (Kingsport, Tenn.). Richards clipped in a ball over the defense and into the path of Broadwater, who took a difficult one-time left-footed volley and blasted the effort over the bar from 12 yards out.

The Buccaneer hopes for a late equalizer were all but diminished in the 83rd minute as the referee pointed to the spot for a Belmont penalty. Dagnoni added to his goal tally on the year for his eighth goal to all but ensure an upset over the #3 ETSU side, sending his penalty cleanly into the left side of the net.

A late header attempt that fell easily to the lap of Petty proved the only chance mustered by the Bucs as Belmont held on for a win to secure a place in the semifinals against hosts #2 UNCG. Despite outshooting the Bruins 13-11 on the afternoon, the Bruins held a 6-3 advantage over the Bucs in shots on goal. Josh Perryman (Sheffield, England) finished the afternoon with four saves as Richards, Luke Parker (Memphis, Tenn.) and Bruno Andrade (Sao Paulo, Brazil) all finished with two shots.

The Bucs finish their 2019 campaign with an 8-8-2 record, including a 4-2 mark in the Southern Conference.