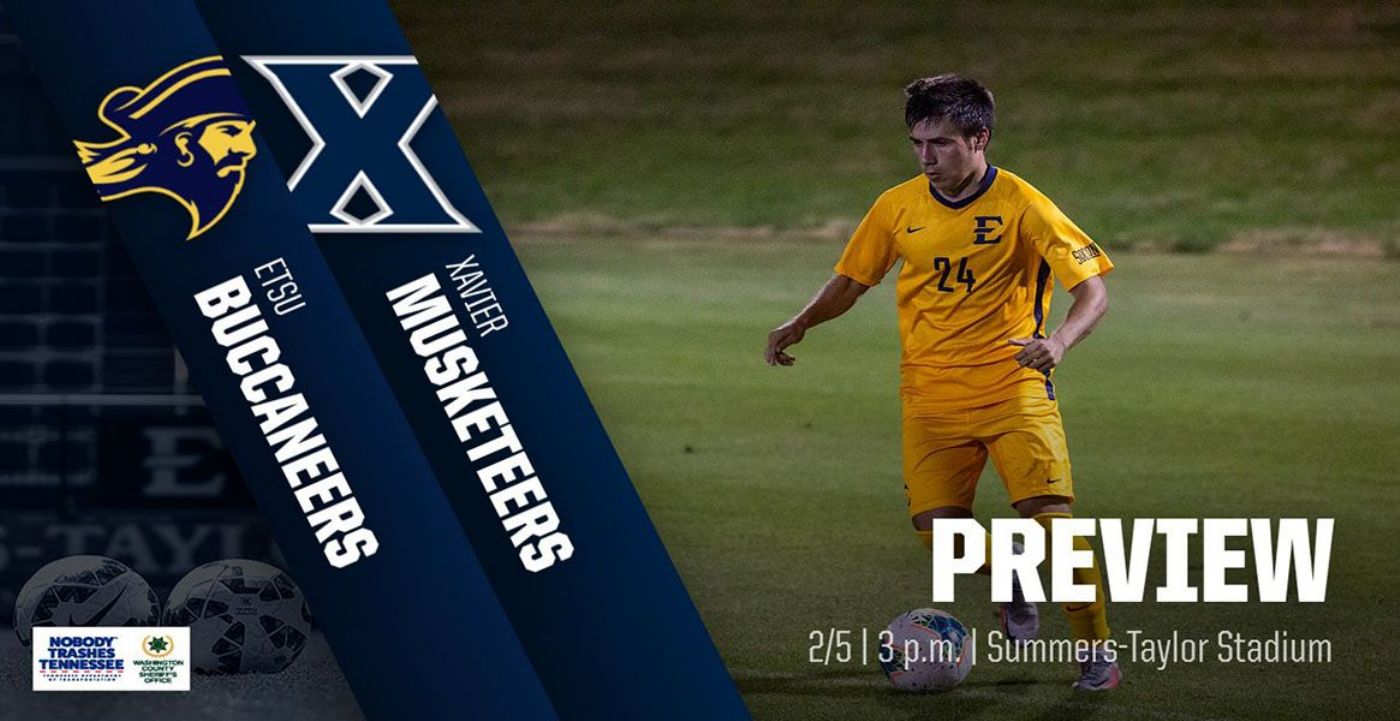 For the first time, the Bucs host a squad from the Big East conference

JOHNSON CITY, Tenn. (Feb. 4, 2021) – After 455 consecutive days without a game, the ETSU men’s soccer team gets a chance to compete as the Bucs host Xavier in the 2021 spring season opener at Summers-Taylor Stadium on Friday afternoon. The kick for the first contest on home soil against a side from the Big East begins at 3 p.m.

The Bucs are set for action on ESPN+ for Friday’s midday matchup against the Musketeers. Mike Gallagher will be on the call for the season opener.

Earning preseason conference honors earlier this week, Kieran Richards (Hamilton, New Zealand) leads a Buccaneer side that was picked fourth in the preseason SoCon poll. Richards returns six of the seven goals that are on the Buccaneer roster for last year’s squad, looking for another goalscoring option with this youthful team.

14 newcomers join the Buccaneer ranks this season, with fresh faces appearing in all facets of the Buccaneer squad. Coming in the fashion of eight freshman and six transfers, ETSU welcomes a blend of experience and talent to their team. Austin Bihlmeyer (Knoxville, Tenn.) and reigning SoCon Goalkeeper of the Year Josh Perryman (Sheffield, England) look to quickly familiarize an otherwise fresh backline, entering the season with the most minutes played in last year’s campaign of returning Bucs. Josh Hancock (Torbay, England) comes in from Marquette to help lead the defense, having prior experience against his former Big East rivals.

In the midfield, Luto Tom (Cape Town, South Africa) and Aidan O’Brien (Asheville, N.C) bring in immediate talent and experience to a very deep midfield position, transferring in from Iowa Lakes CC and La Salle. Jordan Broadwater (Kingsport, Tenn.) and Josh Salinas (Stafford, Va.) look to increase their roles in the center of the pitch, while a host of freshman also look to break into the first team.

Lucas Lightner (Clarksville, Tenn.) is set to compete with Josh Denton (Knoxville, Tenn.) and freshman Jared Leheta (Montreal, Canada) up top, looking to replace a void of goals left behind from last year.

The Musketeers come off a similar season to the Bucs at 8-8-1, but struggled in conference play with a 3-6-0 mark for an eighth place finish in a competitive Big East schedule. This season, Xavier enters with a third place prediction in the Midwest Division.

Xavier returns an experienced side, but loses out on their top goalscoring threat and assisting threat. The Musketeers look to replace their double-digit goal scorer in Samson Sergi and top assist man Derrick Otim, both graduated after the 2019 season. Karsen Henderlong returns to fill that void, building off a season scoring seven goals. In the net, Xavier returns one of the best in the conference in Matthew Rosenberg. The redshirt senior comes off a season allowing 19 goals in 17 games, a 1.11 GAA. The New Jersey native recorded a .793 save percentage last season while securing five shutouts.

The matchup between the Musketeers and Buccaneers marks the first of each program’s history. Xavier is familiar with the Casper name, however, as the Musketeers faced Coach Casper’s brother, an assistant at Georgetown, in a Big East regular season showdown. Mike Casper and Co. were on the winning side of that matchup, edging past Xavier in a 1-0 win.